Gymnastics is a daunting skill-set to take on as an adult. Our newest featured coach, Roger Harrell, specializes in teaching adults. Read on to hear more about his story and how you can learn.

When is the last time you tried to do a cartwheel or a handstand? Probably a few decades ago. If you’ve tried recently it might not have gone so well. Gymnastics is one of the most challenging disciplines for an adult to take on.

That’s where our newest featured coach, Roger Harrell, steps in. Possessing over fifteen years of coaching experience and over twenty years of his own gymnastics experience, Roger’s athletic journey has in reality not followed a conventional path. He was late to the gymnastics game, as well, and that’s what makes him a very special coach.

Roger grew up the typical uncoordinated kid picked last in all sports. He quit Little League when the time came for fast-pitch as he was afraid of being hit by the ball. He spent some time on his BMX bike, but as a long and gangly kid, he was never particularly athletic.

Suddenly, in high school, Roger decided he wanted to do gymnastics. Given his lack of experience, he was put in with the new kids, i.e. the little kids:

I started doing gymnastics at Golden Bear. That’s UC Berkeley’s developmental program for kids. They produce a lot of high caliber athletes because they’ve got the coaches form UC Berkeley and the college guys there to help with the program.

Fortunately the team coach at the time saw me and basically approached me and said, “Hey, do you want to work out with the team?” I thought that sounded great and he said, “You’re going to be completely in over your head as far as skill-level, but at least you’ll be training with kids your age.”

That was a completely eye opening experience. I went from just starting out a couple hours a week doing recreational gymnastics to nine hours a week team level training in an instant and basically got the crap beat out of me every day for a while. My first year or so of gymnastics was just trying to play catch-up.

While some people might be frustrated by the late start and the physical intensity of the practices Roger participated in, Roger looks at it differently:

Myself starting as late as I did and struggling as much as I have was one of the best things I could have done as a coach because I’ve trained and coached alongside of a lot of elite gymnasts and it’s actually pretty humorous what they take for granted. 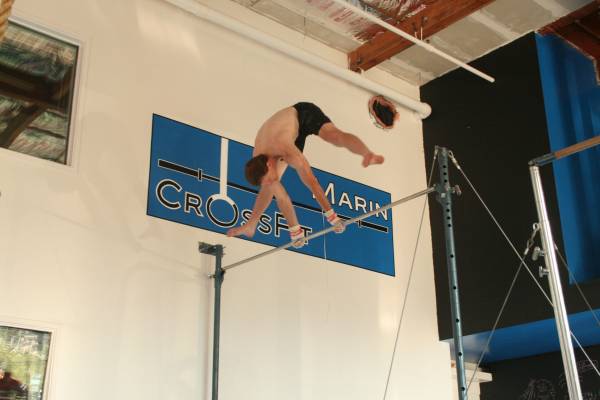 Being as tall as I am, being a nearly six foot tall, big guy – gymnastics is not suited for someone my size. So I’ve had to really struggle and adapt everything I’ve learned to deal with large-sized people in my own gymnastics and of course that’s helped translate into everything we’re trying to do with using gymnastics as a general fitness protocol for the general masses.

After high school Roger went on to study engineering at UC Davis. There he was recruited into the men’s gymnastics program where he not only competed by was the captain of the team for his final two years at Davis.

It was at Davis that Roger got his first taste of coaching:

I started coaching gymnastics near the end of my freshman year when the assistant women’s coach, who ran the local city gymnastics program, approached me about coaching some classes. I started doing that and then about three months after that he asked me if I wanted to take over the whole boy’s program. I jumped in way over my head, I didn’t have a clue what I was doing, but was given the opportunity to just run with it. At the time it was a recreational only program and within about a year I had a competitive program going there. Within about two years I had state champion level gymnasts.

Now, over a decade later, Roger is the Co-Founder of The Cave/CrossFit Marin in Corte Madera, California. There the philosophy is to bring gymnastics to the general populace. Roger has found that his skills of coaching children do make a difference when it comes to coaching adults. If you can keep the attention of a pack of little kids, you can keep the attention of adults who actually want to learn from you.

It doesn’t matter how good your knowledge is if you can’t present it in a way that’s engaging, entertaining, and keep people’s attention. Again, this learning how to keep the attention of twenty 9-year olds really establishes that presence and the goofy drill-sergeant mind set.

But, as any of you who have tried to do a cartwheel, handstand, or any movement on the rings lately know, gymnastics is very different for adults than it is for children. As a coach, Roger is aware of these differences, both physical and mental differences: 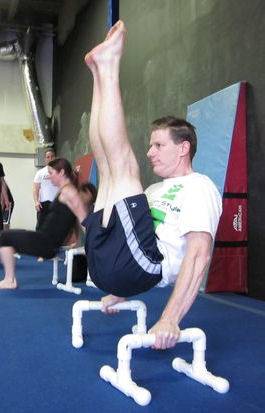 The biggest thing is the risk level. When you take a 200-pound adult, you start teaching them rudimentary gymnastics, and you start getting them airborne a little bit, the consequences of a mistake are significantly higher than when you have a 40-pound kid. You have a 40-pound kid land on their head and they bounce up and they’re fine. You do that same thing to a 200-pound adult and you’re sending them to the hospital, possibly paralyzed or dead. So, it’s a very different kind of approach and you have to be more cautious in the progressions.

The fear issues are also very different. With a kid they will sometimes shut down over completely irrational fears. They’ll see something and they’re like, “No, this is scary,” when from a genuine safety perspective there’s no risk at all. Whereas with adults, they can rationalize through fear better, but they can also think through consequences a lot more. So there are things kids don’t even think about doing. You say, “Just do this and let go and you’ll be fine. “ And the kids are like, “Okay!” And I tell an adult that and they look at you and go, “You’re out of your mind.”

Like any other skill, gymnastics takes practice. Unlike many other activities, though, starting gymnastics actually requires a base of strength and movement ability, hence why so many adults finding it to be a struggle. With the growth of CrossFit there are gyms where people can learn basic gymnastic movements, but not all affiliates have coaches with gymnastics expertise and not all cities have gymnastics gyms that offer adult classes.

CrossFit has a very good change of revitalizing gymnastics in the United States. What I’m trying to encourage people to do is if your affiliate doesn’t have that knowledge base go as a group, or even go as a group of trainers from an affiliate, to a local gymnastics facility and ask them to put together a class for you. Take five or six people in one shot, walk in the door, and say, “We want somebody to coach us.” You need to approach it that way. Don’t tell them you want open gym time to play on the equipment. Tell them you want a knowledgeable coach to run you through progressions as if you were developing a young gymnast. Otherwise most adult programs at gymnastics facilities are just open gym time for ex-competitive gymnasts and that’s not what new people need at all.

The best way to do it is to go as a group so they can see the economic benefit of doing it. If you go as a single person they’re going to say, “I don’t have a place for you, I’m sorry.” But if you have a group you can have them make a place for you. That’s what I’m constantly encouraging people to do. That way we can start building this burgeoning adult gymnastics culture that’s actually fairly alive and well in other countries.

Because of Roger’s late start in gymnastics, his physical attributes, his analytical engineer’s brain, and his years of coaching he has developed a successful system for teaching gymnastics to adults. For the next three weeks you can follow Roger’s workout programming here on Breaking Muscle. These workouts were designed for the intermediate athlete wanting to develop their gymnastic skills. Roger has provided links to articles and videos of himself performing many of the movements.

For Roger it’s not just about the fact he enjoys gymnastics himself, but the benefits he sees from adults training in this discipline – the real life difference it makes:

I’ve seen it so many times in my facility that we take people in their 30s, 40s, and 50s and we start them off in gymnastics. Within three or four years they’re doing things that were literally impossible for them a few years ago. They move with confidence and they’re able to run. If they take a fall – this is where we look at the older population where if somebody trips and falls, if they’ve been doing gymnastics that’s going to be no big deal, because they’re going to just roll, get up, laugh it off, and continue – whereas if you take somebody who’s deconditioned, and has had no movement background, they fall, they break a hip and they die. Nobody should ever be in the position that they fall and they can’t get back up.

For more with Roger, read part two of our interview where we talk about kids in gymnastics – how and when to get them started and how to pick out the right gymnastics school: