Got a Cranky Elbow? How to Train Smart and Prevent Pain

Lifting puts a lot of strain on the elbows. Learn how to move heavy loads without sacrificing elbow health.

Twingy and tweaky elbows are never desirable. But much like with shoulder pain, if you’ve been lifting for any appreciable amount of time, you’ve probably experienced (or currently have) elbow pain. But all is not lost if you already have pain.

This article offers some tips to avoid elbow pain through preventive work. I’ll also explain a few ways to reduce pain and work around it. Not only that, but there’s a little bit of anatomy thrown in so you can show off at parties.

Note: First and foremost, if your elbow is persistently cranky, you should seek professional help for a diagnosis. The pathology of elbow pain varies widely and can be tricky to self-assess.

The medial (inside of elbow) and lateral (outside of elbow) epicondyles are critical attachment points for ligaments and tendons.

The olecranon process sits in the olecranon fossa of the humerus. This is the “hinge” of the elbow. It also prevents hyperextension.

The humeroulnar joint (humerus and ulna) is a hinge joint. The humeroradial joint is a pivot joint. This is how we can supinate (palm up) and pronate (palm down) our hands.

Soft tissue restrictions (i.e. “tightness,” “knots,” or, the super-scientific term, “gunk”) often occur when there is friction between muscles/tendons. Myofascial researcher Luigi Stecco coined the term “zones of convergence” to describe areas where multiple muscles share a common tendon attachment. This creates a zone where forces are generated by multiple muscles, which means there is a high concentration of force in a very small area.

In the elbow there are at least three major zones of convergence: 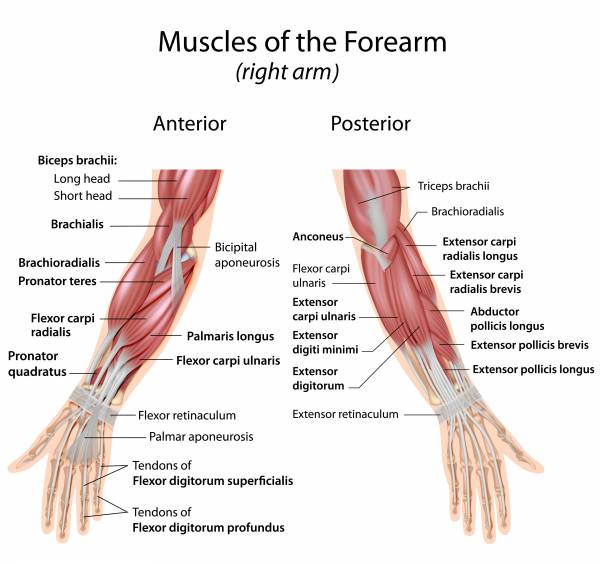 Overall, there are sixteen muscles that cross the elbow joint. That is a lot of tendons. Not only that, but you have ligaments, nerves, arteries, and veins all vying for space within the joint, too. It’s more crowded than a New York subway car at rush hour.

Your main take-away is that the elbow contains lots of things in a very small space. When friction is introduced, the tendons, muscles, and ligaments stick together to form dense, fibrotic tissue- that is, “gunk.” This gunk can impact everything to include nerve function, ligament integrity, and the health of the tendons.

Why Lifting Makes It Worse

Typically, lifters experience medial elbow pain. This is because we go through repetitive elbow and wrist motions while under load (just think of a standard upper-body training day). We grip heavy barbells, dumbbells, and kettlebells. The muscles we use to grip – the flexors of the forearm – attach to the medial epicondyle, so it’s no surprise we can get gunky on the inside of our elbows. And it’s not just gripping the bar on a row or deadlift that produces tension. Take a gander at the elbow position on a back squat. 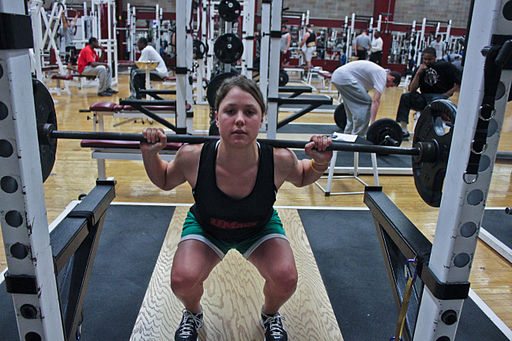 Back squats create stress that affects the inside of the elbows.

Holding the bar on your back creates a lot of valgus (medial or inside the elbow) stress. Do you ever get tingling in your pinky and ring finger after a heavy or extended squat set? The ulnar nerve can get pinched when the elbow undergoes valgus stress.

How to Modify Your Training

Tip #1: Work on Your Soft Tissue and Mobility

The elbow is not only subject to direct elbow movements, such as a bicep curl, but also to the movements of the wrist, shoulder, and neck. Elbow pain can often be a direct result of a dysfunction up the chain. If you’re lacking flexibility in your forearm, shoulder, or upper back, that can have repercussions culminating at your poor elbow. There is a plethora of articles on Breaking Muscle that address shoulder mobility.

Remember how we said there is a lot of gunk in the elbow? Here is how to perform some self-myofascial release on your forearms. Warning: it is not pleasant. If you have access to a soft-tissue specialist, that’s even better.

You should also stretch your forearms:

Extend your arm in front of you, then pull your fingers toward you with your palms in both the supinated (left) and pronated (right) positions.

Soft tissue work and stretching can be preventive, as well. Stay on top of these and hopefully they will reduce the likelihood of developing elbow pain down the road.

Step Away From the Barbell

I know, I know, it’s not what you want to hear. However, if your elbow is really angry, taking a few weeks away from a barbell might give it the time it needs to recuperate. Don’t worry though, you may be able to switch to dumbbells instead. Allow me to explain.

Extend your arms in front of you, palms down. Now rotate your palms toward the ceiling. Do you see the difference in your elbow position? It’s much more “open” in the palms-up position. Recall how claustrophobic the joint is? By pronating your hands (palms down), what little space there might be left is closed off, thus compressing everything inside the joint even further. Even rotating your hands to neutral (palms facing each other) is more open than palms down. Therefore, switching to dumbbells with a neutral grip for a spell can provide some relief as the elbow isn’t as compressed.

Exercises like skull crushers, nose breakers, triceps extensions, or any one of the hundred variations of bicep curls focus the stress of the weight on the elbow and its surrounding muscles. This quotation from Eric Cressey sums it up well:

[W]e vilify leg extensions and leg curls as being non-functional and overly stressful at the knee. The knee is the joint most similar to the elbow, yet it’s much bigger than the elbow, yet nobody contraindicates 4-5 elbow extension-only exercises per week in many routines as being inappropriate – or even excessive. If you want to build big legs, you squat, deadlift, and lunge. If you want to build big triceps, you bench, do weighted push-ups, overhead press, and do dips. The absolute load is higher, but the stress is shared over multiple joints.

If you want to train your arms, stick to multi-joint movements so the elbow is spared from bearing the full load.

Pull Your Elbows In

I see it all. The. Time. People flare their elbows out wide during push ups and bench pressing. Not only does that increase the risk of shoulder impingement, but those valiant elbows, once again, also find themselves straining under the lion’s share of the stress.

Avoid flaring your elbows out to the sides (left) while benching and keep them at a 45-degree angle to your body (right).

This can easily by remedied by tucking your elbows to roughly a 45-degree angle from your body. Pulling your elbows in allows the upper back muscles to assist in stabilizing and can alleviate elbow pain instantly.

Use Fat Gripz With Pressing Movements

I don’t recommend using Fat Gripz with rowing movements, as that will greatly increase the gripping demand, which could aggravate the elbows. However, when used during pressing movements, the muscles of the forearm don’t have to clamp down as hard due to the increased girth of the bar. This can provide some relief for those overused muscles.

Find the Root and Fix It

Elbow pain in lifters often finds its roots in one or more of the following: poor tissue quality, lack of flexibility (shoulders, upper back, etc.), and overuse of various muscles that cross the joint. All of these can be addressed with dedicated soft tissue work (either by yourself or a professional), specific flexibility work, and various exercise modifications.

Ignoring elbow pain will only make it worse and eventually stop you from doing the activities you enjoy. You can easily reduce the pain (or eliminate it entirely) by taking a few weeks to attack the above-mentioned areas. You use your elbows all the time and you only get one set, so take care of them!

Photo 4 by By Em Bhoo via Wikimedia Commons.