I have a rule with my clients: if you shake your head during a workout you owe me ten burpees. Self-talk has an impact on your performance and the research is out there to back that claim up.

I have a rule with my students and clients: no headshaking. If you shake your head during a workout there is a ten-burpee penalty, due immediately upon completion of the workout. There is distinct drop in the amount of headshaking that occurs in my private sessions and classes once this rule is issued.

Although more than one client has accused me of sadism, I don’t issue this burpee rule for any personal satisfaction other than the success of my clientele. Truly. I have this rule because your mental state and your physical performance are inseparable. And I guarantee you that shaking your head “no” before attempting an exercise does not contribute in any positive manner to your performance.

Think about what is happening when you are shaking your head: You are saying no. You are visualizing failure. You are analyzing and thinking. Versus: Being in a state of “yes.” Visualizing success. Letting go and finding your flow. Shaking your head is a judgment, and not a good one.

Too often I see people working out and falling into the trap of thinking their workout performance means something about them as a human being. A study published in the Journal of Strength and Conditioning Research looked at perspectives on achievement and motivational responses in teenaged, competitive weightlifters, but I think what the researchers wrote in their conclusion applies well to adult fitness enthusiasts and athletes, as well:

Athletes need to know that their value as human beings is not dependent on their athletic achievement; their self-esteem should build on numerous qualities and aspects of their personalities (e.g., friend, student, guitar player). Unfortunately, some athletes’ entire self-esteem hinges on their role as an athlete, and they are at risk of crashing hard if their participation in sport ends unexpectedly (e.g., injury, burnout). Athletic careers do not last forever, and when participation in competitive weightlifting one day ends, athletes should be left with numerous great memories.1

Is your headshaking creating great memories? I’m guessing not. A headshake is an obstacle. It’s a, “I’m going to try this, but I don’t think it’s possible.” It’s an “I’m not good enough,” “I’m weak,” or “I’m slow.” Well, that’s inspiring. That sort of self-talk is not going to provoke a great performance from you.

Another study in the Journal of Strength and Conditioning Research looked specifically at the effect of self-talk on performance. Researchers used the vertical jump as their test movement and examined how the kinematics of the movement were affected by instructional, motivational, and neutral self-talk. They found that both instructional and motivational self-talk led to greater forces generated and higher jumps.

Last year a group of researchers did a systematic review of all the published articles on the effects of self-talk. That means they read through all the existing studies, saving us the work, and compiled the results. They came up with the following conclusions:

So for you, as an athlete, that means the best-case scenario is that negative self-talk will not make you worse, but it also won’t make you better. Whereas, the simple practice of providing yourself with instructional and/or motivational thoughts will inspire you to better performance. It’s scientifically proven folks. Stop shaking your heads and practice positive self-talk if you want your PRs. What else can you do – right now – that can make that simple of a performance difference? 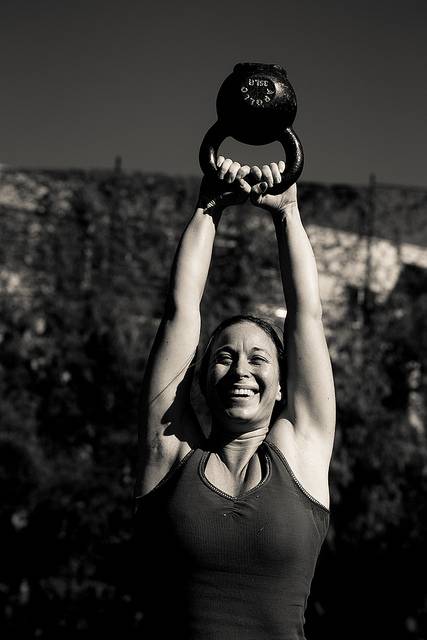 I had a client years ago who was a police officer. She was terribly serious during her workouts. She did this thing, though, that I loved. Her last name was Bailey and she would encourage herself as if she was her own instructor. “C’mon, Bailey!” she would say sternly, and then do her reps. “You can do it, Bailey!”

Aside from the entertainment factor, the best part of Bailey’s self-coaching was the lack of judgment. It was never “Bailey, you suck” or “Bailey, you can’t do this.” It was a prompt to keep moving forward. It was a simple positive statement.

What if instead of a headshake you were a head nod? What if you were a “Get moving, Bailey!” for yourself? What would your training look like if you removed the negative self-talk?

And for those of you who don’t take me up on this proposition – you owe me burpees.