Thinking Outside the Box: Strongman Training for Swimming

Maybe you’ve heard about U.S. swimming superstar Ryan Lochte using strongman training to become a better swimmer. I’ve used them, too, and here are my recommendations for the best exercises. 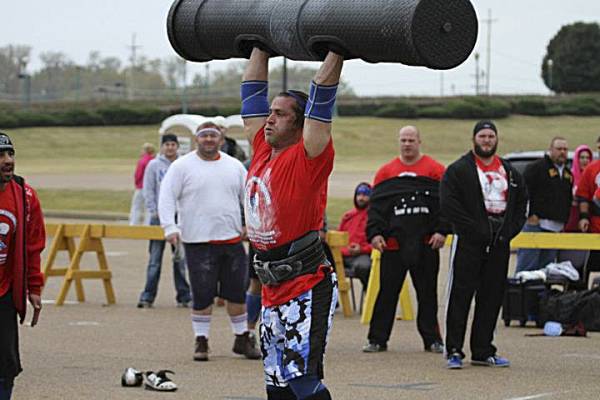 If you have been watching swimming at the Olympics, and if you watched the U.S. Olympics Trials, then strongman training for swimmers is no longer a foreign concept. Olympic swimmer Ryan Lochte has recently brought a lot of attention to strongman after crediting his performances at the Olympic trials and in London so far to his unconventional training outside the pool.

Lochte adjusted his dry land training repertoire after feeling disappointed with his performances at the Beijing games four years ago. Matt DeLancey, strength and conditioning coach at University of Florida decided to add strongman exercises to Lochte’s training to mix things up. The results have been pretty spectacular and led Lochte to an amazing win in the 400m individual medley in the first day of swimming action in London. And even though the following two performances by Lochte were considered subpar, it is worthy of note that those are not events he trains for, and the remainder of his prime events is yet to come.

I, too, have some strongman experience as an athlete and as a coach. My coach, Cliff Davidson, incorporated strongman exercises in my CrossFit workouts as I approached competition, to create explosive power that I used particularly for my sprint events. When programming for my athletes I typically incorporate a strongman movement once weekly, usually part of a triplet with other non-strongman movements. As strongman goes, I have been fortunate to be at one of the prime locations for strongman, Desert Strength Gym, with amazing professional and amateur strongman athletes whom I have learned a lot from in the last six months. Strongman for swimming doesn’t work on its own. It is best incorporated in addition to a specific strength and conditioning program and, of course, swimming program.

In my experience as an athlete and coach, the following movements yield the most benefit when incorporated in swimmers’ strength and conditioning programs:

Jason Sparks (US Marine, Veteran Strongman, 3rd place at Strongman Nationals and top ranked strongman in the lightweight division) is likely one of the nation’s best tire flippers. Sparks has successfully flipped a 1000lb tire, and is the fastest tire flipper of the 800lb tire for twenty repetitions. While swimmers wouldn’t be expected to flip tires at these strongman weights, the technique and benefit remains the same. The movement targets the posterior chain and hip drive, focusing on explosive power and athleticism, with minor focus on the quadriceps, biceps, and upper back. It is designed to be an explosive and powerful movement, and no benefit comes from performing it at slow speed. When done for multiple repetitions the tire flip also has a huge mental component.

For a tire flip, Sparks advises to setup with feet shoulder width apart with an aggressive lean on the tire. The hands should be placed just outside shoulders and while keeping arms straight. Drive the tire up by pressing against the tire in an upward movement using the legs. Take short, choppy steps and continue to drive the tire to hip level, at which point the hips are used to drive through the tire. The hands change from under to over the tire grip, while supporting the weight on one leg. Finish the movement by pushing the tire over. Sparks cautions, “Do not deadlift the tire! The drive should come from the hips and legs.”

Here is a video of Sparks himself performaing tire flips:

Scott Porter, a seven-year strongman veteran, lightweight professional strongman, runner up America Strongest Man, and recent competitor at World’s Strong Man in Beijing, China, believes the one motion log press has everything a swimmer may want from one single movement. The log press has triple extension (ankle, knee, and hamstring), it utilizes one motion from the lap to overhead, and uses key hip extension to complete the movement. It works on explosive and shoulder strength, but conditioning can also be achieved when the movement is done for repetitions.

Porter, who currently operates Desert Strength Gym and more recently SpartanFit CrossFit in Phoenix, AZ, suggests performing a one motion log press “Grace” for conditioning, with a light log implement (50 or 87lbs). To perform the log press, begin by addressing the log with a shoulder-width stance. Grab slightly behind the mid-point of the handle (1/2″) while bending the knees, and keeping the back flat and head in a neutral position. Bring the log to the lap using a row/deadlift technique. This is the point you would return to if performing multiple repetitions. Place the chest on the log while bringing the log in tight to the body. In one motion, aggressively clean the log through the hips to the upper chest. This will resemble “rolling” the log up your body. Continue the momentum of the log driving it overhead; Porter advises, “Do not stop the log on the chest”. After lockout, reverse the order back to lap. 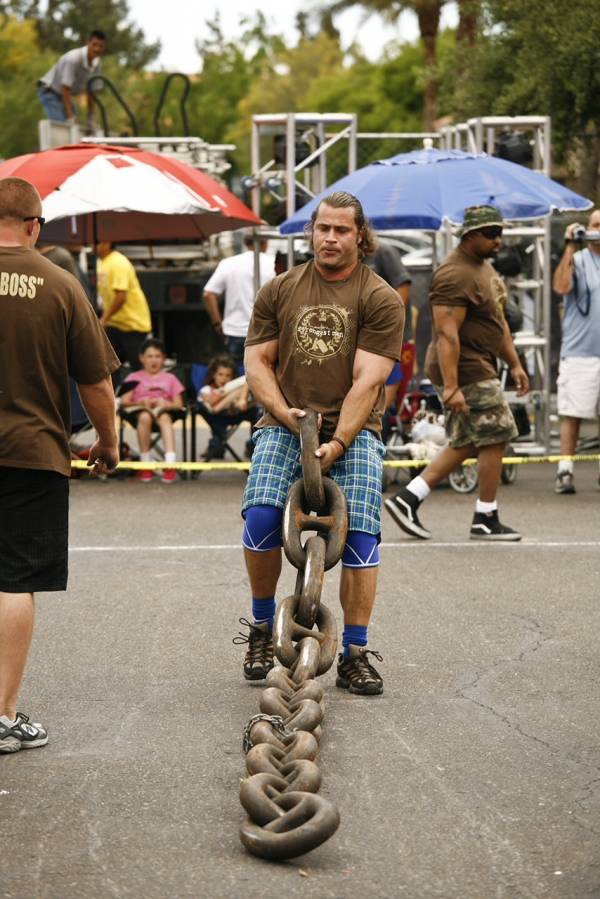 In strongman, dragging can come in many forms: tire, sled, anchor chain, you name it, pick a heavy awkward-shaped object and strongman athletes will be happy to drag it. It is a lower body movement that focuses mostly on overall leg strength and athleticism. It uses constant flexion and extension of the knee that transposes well into kicking in swimming. Porter states, “The drag is one of the easiest strongman movements to teach and in my opinion the most underrated. Dragging is tremendous for placing huge stress on the quads and calves, especially when done heavy.”

If using a sled or tire, typically you will have a handle that attaches to the implement, but not with an anchor chain, which you would grab directly. To perform the drag, maintain an upright posture as you drive through the feet walking backwards. Porter advises, “A slight lean back will help use your bodyweight with heavier drags, but be careful leaning too much will cause you to fall.”

Julien and Tatiana Pineau, owners and operators of StrongFit Gym in Torrence, CA, use a strength and conditioning system that was developed using the CrossFit wrestling conditioning and strongman protocols. Julien was also a swimmer for twelve years in his native France, claiming state championship titles in butterfly and freestyle in his day. Julien is a fan of the keg toss for height for swimmers because it provides triple extension, as well as speed and explosive nature, and it is low impact on the shoulders.

The basic technique for tossing the keg involves swinging the keg in a pendulum-like manner and releasing the keg when it is at its apex. The keg toss can be used for maximum height or maximum distance. According to Pineau, to successfully do the keg toss, “Go into a squat with the keg resting on the ground in front of you. Grip it firmly on each side and then launch yourself to a standing position using quads and gluteus. Use the lower back muscles to gain leverage and launch the keg backwards over your head.” This is probably one of the closest movements to a dive in which you utilize legs, core, and arms for propulsion. 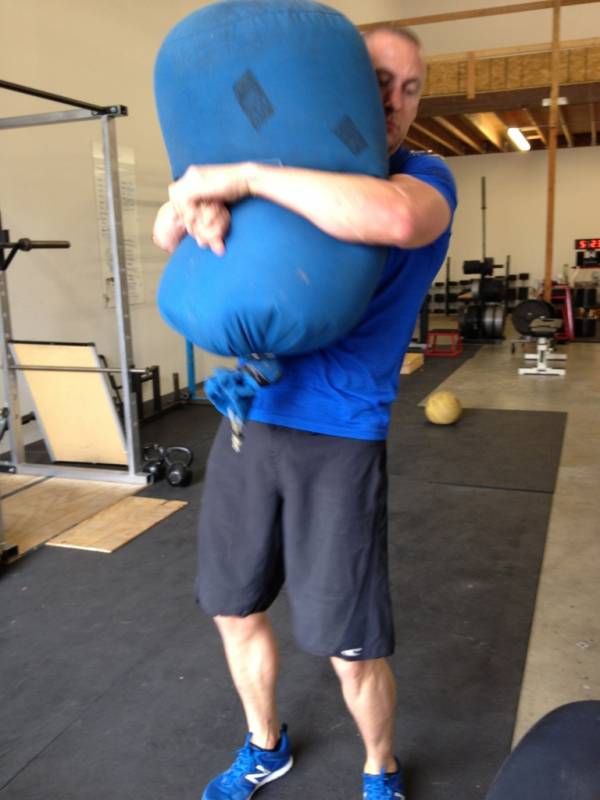 The Pineaus are also huge advocates of the sandbag carry for swimmers. Sandbags are widely used in strongman, and more recently in CrossFit also, in a number of ways. The carry works the lower back and core, but also provides metabolic conditioning. Pineau remarks that the sandbag carry teaches the athlete to breathe under strain, which he correlates to increased lung capacity in his athletes. This is of extreme importance to swimmers.

The important part of the sandbag carry is to place the sandbag high enough on the chest, leaning back slightly. The point is to engage the erector muscles and gluteus. You will know you are doing it right if you walk with your feet pointing outward. The position will be VERY uncomfortable at first, the core muscles have to get used to the pressure, but the rewards are great.

Overall, most strongman movements, especially the ones mentioned above are not only a good way to push the body past its physical limits, but also a great means for building mental toughness. Strongman strength training can also dramatically improve vertical jumping strength, which is needed for strong starts, turns, and underwater dolphin kicks.

Finally, I notice with my athletes a marked increase in confidence that quickly translated into improved performances in the pool. If you have watched recent Lochte’s interviews and advertising videos, it is clear this training has made him exude confidence.

Ultimately, it is clear these days swimmers are looking at every possible means to improve their performances in the pool. Thinking outside the box has paid off for a few swimmers. What might come next?