Carl Paoli, known for his many videos on GymnasticsWOD recently released a new book, Free+Style, and accompanying seminar. I was fortunate to both read the book and attend his seminar.

Carl presents an interesting story about his progression to writing this book and his current thinking. He spent many years as an aspiring Olympic gymnast who was told there was one and only one way to perform movements. During this time, he would repeatedly perform a technique until he reached perfection before moving on to the next technique. This rigidity did not sit well with him, but it wasn’t until he was teaching adults gymnastics that he developed his own philosophy.

“Using his new approach, we can freestyle our way to improving our movements. Our body will fill in the blanks of where we are weakest.”

One day a woman he was training came in with athletic tape all over her body. The tape was to protect her injuries that she had sustained from his training methods. This image of a woman in her mid-forties covered with tape made him reevaluate the rigid style of training he had learned as a gymnast and was passing on.

The Birth of Freestyle

Carl began working with Kelly Starrett at San Francisco CrossFit and he started thinking more about movement patterns. He felt gymnastics could be better learned by first improving movement patterns that weren’t functioning well. Carl also heard a neuroscientist say that we learn to read, so that we can read to learn. This struck him, as he’d had the same experience with movement. We learn to move, so we can move to learn.

Thus, Carl came up with the concept of freestyle. Using his new approach, we can freestyle our way to improving our movements. Our body will fill in the blanks of where we are weakest. If we keep challenging the body in different ways (progressions), eventually we will get the movement. Here is Carl’s definition of freestyle:

The natural adaption that our bodies use to select the optimal solution within set standards is Freestyle.

I have heard Carl talk on different podcasts (e.g., Scott Iardella’s and Barbell Shrugged) and he seems like a unifier of different camps of thought on movement. To those who criticize his methods, he believes there is more than one way to learn something. His way is not the only way and neither is any other.

“Movement has many basic skills that are fundamental to higher level techniques. If we don’t train all realms of movement, then we are stuck in a single realm.”

He sees all movements on a continuum. Thus, a push up offers a great deal of information on how a person will do a handstand and eventually a muscle up. Movement has many basic skills that are fundamental to higher level techniques. If we don’t train all realms of movement, then we are stuck in a single realm.

Carl likened the process to using a Smith machine for squats. Using this machine can build strength in only that machine, but eventually we have to move to back squats, front squats, lunges, and pistols to fully develop all movement patterns.

Do We Have to Do CrossFit Style?

I must admit I went to the seminar hoping to do some cool gymnastics tricks. This year, I have been focusing on more bodyweight movements and I was hoping to have new challenges (e.g., planche push ups, strict muscle ups from front levers). I was a bit disappointed to see that the movements we worked toward were mostly CrossFit-related movements, such as kipping headstand push ups and kipping muscle ups.

“If a band shows up to a concert and there is no auto-tune and the electric guitars don’t work, then the musicians need to be able to go acoustic. We need to have the same flexibility with our movements.”

Then I figured out why I was disappointed – I am terrible at kipping anything. I do strict handstand push ups, pull ups, and muscle ups. I do this because I am terrible at kipping. I rationalize that kipping is stupid and dangerous. But at the seminar, it dawned on me that I need to do these kipping movements to make my other movements better. Doing a kipping handstand push up is related to the skill of being able to flip on my feet from a handstand (maybe a goal a few years from now).

So, to freestyle, as Carl teaches, is to be able to take all movement patterns into different settings. If a band shows up to a concert and there is no auto-tune and the electric guitars don’t work, then the musicians need to be able to go acoustic. We need to have the same flexibility with our movements. 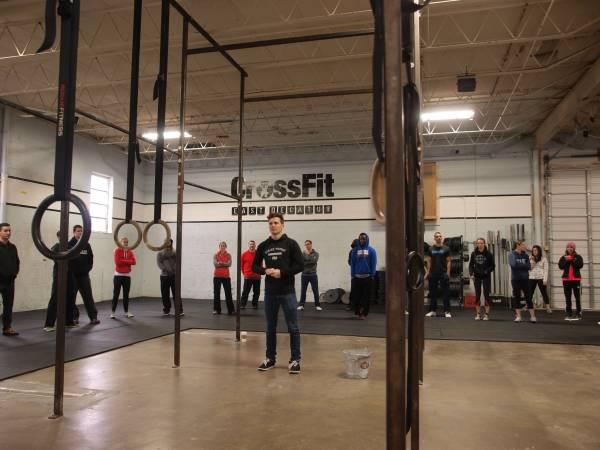 Freestyle is an interesting approach to movement. The basic principle makes sense. We need good movement patterns in order to do gymnastics and Olympic lifting. As Dan John would put it, we need a good base of Quadrant I, II, and III before working on our specific Quadrant IV skills. Likewise, it is best for children to participate in a great many sports to build all movement patterns before specializing.

“The basic principle makes sense. We need good movement patterns in order to do gymnastics and Olympic lifting.”

I have no doubt that the system works for Carl. In the seminar, he challenged people’s movement patterns and they acquired new skills. The question is can others learn this approach by reading the book or attending the seminar? Can coaches see the global patterns he mentions in the book?

It might take a few iterations of his system to make it better. I think he can apply his concept of freestyling to his own coaching, and over time he will perfect his methods. Either way, the book and the seminar offer some great progressions that will help many athletes get better at moving properly.