I’m a skeptical person when a new idea or contraption enters the market. I’m an old-school thinker and look at new innovations as “whatever.” If some new fangled device has merit, though, I am all for it. But most new attempts are either an extension of some past device or based on unsubstantiated hype.

I recently attended the Collegiate Strength and Conditioning Coaches Association National Conference in Nashville, Tennessee. And there was a vendor that marketed a glute-hamstring device called the GluteForce. (And, no, this is not a paid product placement – I just want to share about something new you may not have seen before.)

The GluteForce works the hamstrings through a full range of motion.

But, first, let’s talk for a minute about the devastation a hamstring injury can cause an athlete, and how we can best design our training to address this problem.

As most of you know, the hamstrings are a vulnerable muscle group. You’ve no doubt seen the injuries before on many occasions. An athlete is out for weeks and many man-hours lost in competition. How, then, can you target the hamstrings in the attempt to injury proof them?

“Possessing strong hamstring muscles should be the goal to prevent injuries and maximize sport performance. Ask yourself: are you strengthening them in both concentric and eccentric muscle actions?”

Set, repetition, and loading variables are one option. What is the best prescription for preventing injuries? Three sets of ten reps? 80% of a 1RM for three sets of six reps? A repetition range (i.e., 10-15) used to train to volitional muscular fatigue progressively over several weeks?

What about the specific exercises used to target the three muscles that compromise the hamstrings? In the past, trainees have used machine leg curls (prone, standing, and seated), Romanian deadlifts, Stiff-leg deadlifts, back extensions, glute-hamstring machine raises, and Nordic hamstring work.

Those are all fine exercises. But do they address the mechanisms behind the deficiencies that contribute to injuries? Possessing strong hamstring muscles should be the goal to prevent injuries and maximize sport performance. Ask yourself: are you strengthening them in both concentric and eccentric muscle actions? 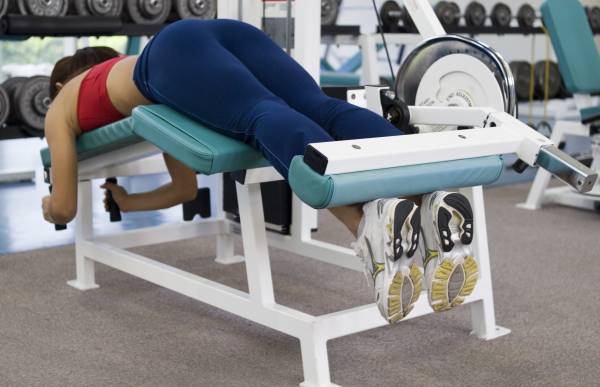 Discomfort on the thighs and general awkwardness are common complaints with conventional hamstring devices.

The Reality of Hamstring Injuries

Take a look at the reality of hamstring injuries:

“Your goal is to injury proof your hamstring muscles in their role as knee flexors and hip extensors, both in the concentric and eccentric contraction phases.”

Most non-contact hamstring injuries occur during the front side mechanics of the swing phase when the biceps femoris is lengthening (eccentrically) prior to ground contact. It’s difficult to replicate the speed of eccentric hamstring muscle contraction in anything other than in all-out sprinting. However, eccentric work can be performed on a device made for such a purpose.

The present day approach for glute/hamstring work makes sense. Position yourself in the device, raise to a back extended position, and then perform knee flexion via concentric hamstring contraction to further raise the torso to a vertical position. The eccentric lowering contraction can also be performed from the vertical torso position back to the extended hip position.

But there are three issues with most glute-hamstring devices:

Which all brings me back to the GluteForce device. This device has the ability to address the all-important eccentric hamstring work through a full range of motion to emphasize injury prevention.

Your goal is to injury proof your hamstring muscles in their role as knee flexors and hip extensors, both in the concentric and eccentric contraction phases. After being introduced to the GluteForce, I believe it’s a great tool to accomplish that goal.

1. “Hamstring Strain in Sprinters,” The Sports Injuries and Fitness Clinic – Injury Treatment and Athletic Enhancement in South London. Accessed May 15, 2015.