You probably know someone or you yourself have dealt with hamstring problems related to running. Now researchers take a close up look at the relationship between sprinting and injury.

Hamstring injuries. They’re a pain in the, well, backside. You can strengthen the hamstrings, expose them to sport-related stresses, stretch them out, and warm them up, but they can still incur injury, particularly during all-out sprinting.

What can you do to safeguard against debilitating and nagging “hammy” issues? Stick to the aforementioned activities and learn more about the mechanisms that create these injuries. Hamstring injuries that occur during sprinting are worthy of study because of the mystery surrounding this supposedly innocuous, non-contact activity.

Hamstring injuries. They’re a pain in the, well, backside. You can strengthen the hamstrings, expose them to sport-related stresses, stretch them out, and warm them up, but they can still incur injury, particularly during all-out sprinting.

A study entitled Mechanics of the Human Hamstring Muscles During Sprinting performed at the University of Melbourne sheds more light on the hamstring group function during maximal sprinting effort and possible mechanisms of injury. The goal of the study was two-fold:

To begin, let’s take a look at the anatomy of this vulnerable collection of muscles that comprise the hamstrings. Understand that three of the hamstrings are biarticular (SM, ST, and BFLH). That is, they are “two-jointed” and cross the knee and hip (and thus affect both knee and hip movements).

In the study, data was collected from seven subjects during sprinting on an indoor running track. Researchers recorded full-body kinematics and ground reaction force simultaneously. Experimental data were integrated with a three-dimensional musculoskeletal computer model comprised of 12 body segments and 92 musculo-tendon structures. The model was used in conjunction with an optimization algorithm to calculate musculo-tendon strain, velocity, force, power, and work for the hamstrings.

Results of the study showed SM, ST, and BFLH all reached peak strain, produced peak force, and performed a significant amount of energy-absorbing eccentric (negative) work during terminal swing (point from where front lower-leg is vertical until foot contact).

The biomechanical load also differed for each hamstring muscle: 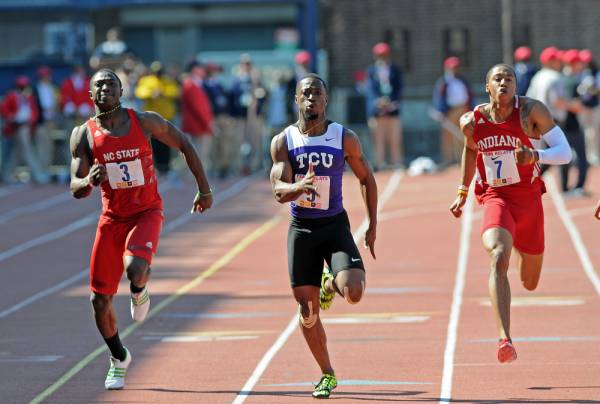 The researchers concluded the biarticular hamstrings lengthen, produce peak force, and perform significant eccentric work (energy absorption) during the terminal swing phase of the stride cycle. Additionally, biomechanical loads differed for each individual hamstring muscle as noted previously. As peak musculo-tendon force and strain for BFLH, ST, and SM occurred around the same time during terminal swing, they surmised that this segment of the stride cycle may be when the hamstrings are at greatest risk of injury.

It is obvious the involvement of the hamstrings during sprinting is complex. Similar to other muscle groups that work in harmony during sport-skill execution, the hamstring group must do the same. However, due to the biarticular nature of the SM, ST, and BFLH, the intricacies of concentric and eccentric force outputs acting at both the knee and hip joints through the stride cycle makes the group more vulnerable to chaos. Based on this, it is recommended that hamstring injury prevention and rehabilitation programs should emphasize strengthening exercises that also involve eccentric contractions performed with high loads at longer musculo-tendon lengths.

Remember, because the hamstrings act at the knee and hip joints, knee flexion and hip extension should both be addressed. Therefore, suggested exercises to strengthen the hamstrings: