We often talk about periodization and training programs as if they are the only training a person is completing. For many people, it’s not that simple.

RELATED: The Reality of Combat and Special Forces Training

The researchers wanted to see the effect of block periodization (three blocks of four weeks) on hormone factors. In each of these blocks, researchers measured cortisol, testosterone, and DHEA-S. The three blocks of training focused on different levels of intensity.

Table 1: Resistance exercises, sets, and reps for all three blocks over the 12-week training period.

An important finding was the increase in the DHEA-S-to-cortisol ratio from block two. This is indicative of a reduced risk of overtraining. Lower reps with higher intensity seems to put the operators at a lower risk of overtraining compared to the mid-range reps and more endurance work. 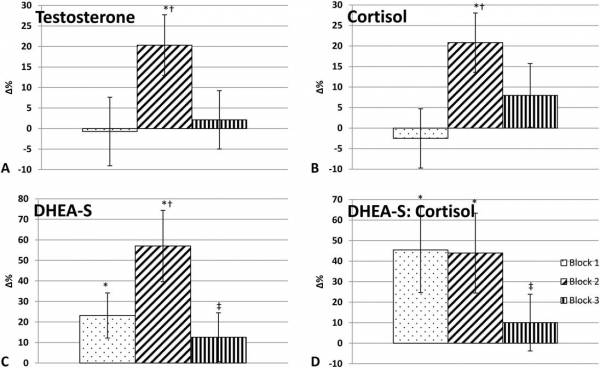 It is difficult to know what other types of training these operators were doing during the research study. It is doubtful that the protocol training was their only training as it took only sixty minutes of each day. The authors of this study did not mention other activities or whether they were consistent across the study. If these activities were not consistent, then the results could be influenced by this outside training. Similarly, we don’t know about sleep deprivation, calorie deficits, or other stressors.

It is important to study special forces operators as the results apply to many other military, police, fire, and physical laborers. The difficulty is that there are many variables that can influence the study. These variables should be measured and accounted for in the analysis.

“The authors make the point that block periodization helped reduce the risk of overtraining. They have a viable hypothesis, but a comparison to a control group would help bolster their idea.”

One other consideration in this study is the order effect. It’s possible the previous block could have influenced the hormonal response on the next block. Varying the order of the blocks among participants can mitigate that effect.

The authors make the point that block periodization helped reduce the risk of overtraining. They have a viable hypothesis, but a comparison to a control group would help bolster their idea.

Furthermore, this study is a good starting point in looking at individuals with concurrent workload. Finding out how these other factors influence training is important. There is much more research to be done on this topic. The idea of adjusting volume and intensity throughout training is probably important for everyone.