Hamstring raises on the glute-ham developer (GHD) might be one of the best exercises you are not doing. They build powerful hamstrings that might improve sprinting speed and jumping ability. And they provide a great way to focus on the posterior chain without loading the back as in good mornings and deadlifts.

Why Train the Hamstrings?

A few weeks ago, I discussed the Janda sit up as an alternative to GHD sit ups. But the GHD machine still serves a great purpose if we flip over and do hamstring raises instead.

In general, as athletes, we should focus more on functional movements that rely on many muscle groups. But even in doing complex movements, we can still be susceptible to highlighting one area more than others. For example, doing too much anterior chain work in front squats and Olympic lifts. Thus, there are times when it is important to balance out weaker muscles, such as the hamstrings.

The key with the hamstring raise is that it is not the same as the back extension, as you want to keep your back in the same position throughout. Imagine having a long spine throughout the movement. Start with your knees as close to the pad as possible. You will begin the movement with your body in a straight position and pressing with your toes.

By bending the knees and activating the hamstrings and gastroc (by pressing with your toes), you will elevate your upper body into a vertical position. 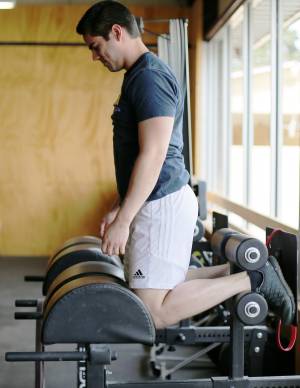 Benefits of the Hamstring Raise

Here is a video demonstration of the entire movement:

NOTE: Sometimes this exercise is called the glute hamstring raise. I left the word glute out of this article as it does not activate the glutes to a great degree. If you want to work the glutes, do some heavy hardstyle kettlebell swings, deadlifts, or barbell hip thrusts.