We all remember the basic laws of physics that we supposedly learned back in our school days. Well, we may have “learned” them, but the real test is whether we remember them. These lessons are ones we should remember because they are relevant to the activity of weightlifting, or any other kind of lifting for that matter.

The Area of Balance

One such law is that in order to support any weight that weight must be positioned over its center of balance. If you move it out of that center, it will topple over. We all know this in weightlifting. If we get the bar too far in front or too far behind us, we are going to miss the lift. The trick is to keep the bar within that area of balance. And what is a weightlifters area of balance?

Any good coaching manual will tell you the fore-and-aft area of balance lies between the rear of the heel bone and the front of the balls of the feet. This is where the bar must be when you are lifting with both feet in line horizontally, such as in overhead pressing, snatching, cleaning, and squatting. When splitting, in either the pulling lifts or in the jerk, then things get a bit more complicated. In those cases the area of balance goes from the balls of the feet on one leg to the toe of the other leg. Thus in weightlifting, it helps to have long feet.

The width of the feet placement will also have an effect on the area of balance. The side-to-side area of balance will obviously be located between the outside edges of both feet. The wider the foot placing, then the wider the lateral area of balance. A wide foot placing will help to side-to-side balance but will be more unstable on a fore-and-aft basis. However, too narrow a foot spacing will leave a very small area of balance within both planes. So as it is in most things, in our sport the ideal position is always a compromise between two extremes – not too wide and not too narrow, but just right for a lifter’s ideal leg drive.

The Centers of Gravity of the Bar and the Athlete

We now look at the center of gravity, which must remain within this area of balance in order for the lift to be carried out properly. And when we speak of center of gravity in weightlifting we actually have to consider two centers of gravity.

The more difficult center of gravity to determine is the center of gravity of the athlete (CGA). This not only changes according to the physique of the lifter, it also changes according to the body positioning of the lifter at any given time. It is still somewhere in the middle of our body – somewhere in the area of the hips and the waist – and because we, like the barbell, are quite symmetrical it is along the centerline of our body. But how high the CGA is along that line can change somewhat depending on where our arms and legs are positioned at any given time.

The Center of Gravity of the System 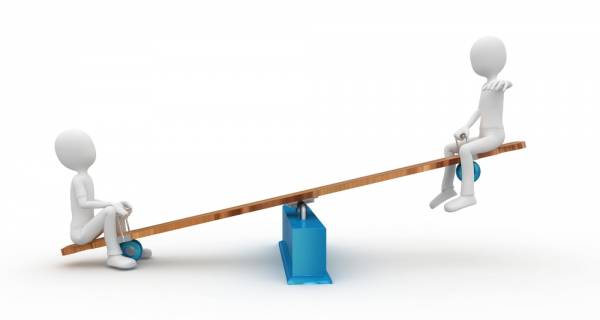 To determine where that is exactly, you must go back to your physics class. Remember the simple seesaw example that illustrated leverage equilibrium? If two kids weigh the same, their center of gravity will be exactly halfway between the two of them on the seesaw, right where the fulcrum is located. But if one child is heavier than the other, than the other child must be shifted in order to maintain seesaw equilibrium. You probably learned how to determine unbalanced positioning via algebraic methods.

The Application of Physics 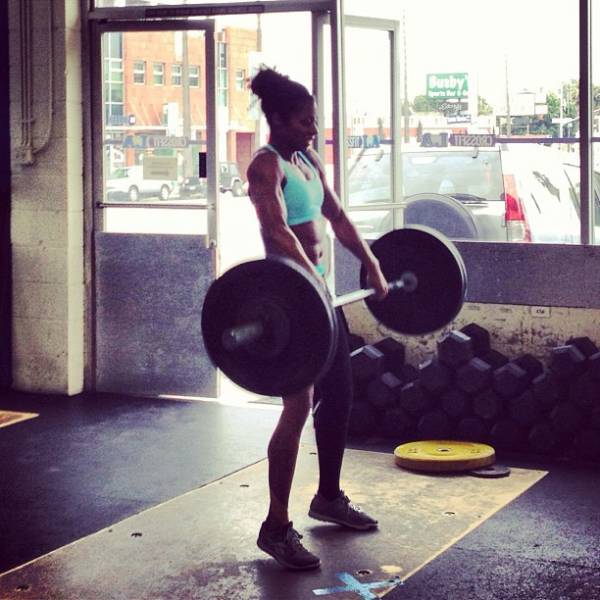 Okay, what relevance does all this have for the lifter? Well, that brings us back to the area of balance. Remember the area of balance is on two dimensional planes. The CGB (center of gravity of the bar) is always in front of the CGA (center of gravity of the athelte) for all pulls, jerks, and front squats simply due to the biomechanical makeup of the human body and the physical impossibility of putting the bar directly over your CGA. Both CGA and CGP must remain within the area of balance, but as the barbell gets heavier it will move the CGS towards the front of your area of balance. The heavier the barbell the more difficult it will be to keep it within the area of balance, especially in the jerk portion of the lift. That means your technique must be more precise as the barbell gets heavier. Those small lifters doing triple bodyweight clean and jerk lifts are to be congratulated not only on their strength, but also on the precision of their jerking. And remember their feet are much shorter than those of heavier lifters, too.

This whole area of balance situation can be seen in a YouTube video of Paul Anderson one-arm pressing 300lbs. In order to do the lift, Anderson had to lean his body to one side so his pressing arm could remain within his area of balance. Even with a man a strong as Anderson, if he tried pressing a weight that was nearly his own body weight while standing bolt upright, he would be dangerously close to the edge of his area of balance. Finishing the lift would be difficult if not impossible. Several commenters chided him for this “cheating,” but they were out of line for doing so. Unless Anderson would have solidly anchored himself with his other arm such a feat would have been impossible.

We’ve all seen superheroes in the cartoons lifting ridiculously huge objects with no such anchoring. Even superheroes could not do anything like that in real life since they would be violating the simple laws of gravity. And neither can you. Be aware of your area of balance and be aware of where the bar is within your area of balance as you lift. To do so will mean fewer lifts lost out the front or the back door.