It’s not that I was scared of my granddad growing up; it’s that I knew from an early age not to piss him off. But a lot of things pissed him off. My childhood image of him remains the same: a rough, barking presence; a six foot two former Marine Corps sergeant with a full head of hair, mean ice-blue eyes, and a smirk that slapped you around. I’ve never seen him sentimental except maybe in the few seconds he stood over the open casket of my grandmother where I caught him quiet and staring. But it was the type of sentimentality forced upon you when regret brings you to your knees.

We have nothing in common, my granddad and I. Or I believed we didn’t until I realized we have an athletic connection, a connection I only recognize now that I’m a grown woman. When I was a child, we often watched the Kings play hockey on a TV built into a huge wood console in his den. We didn’t speak much. He was on the red leather couch smoking a cigar and I was cross-legged in a studded chair near a bar lined with bottles of scotch and whiskey. The walls of the den were plastered with Marine Corp memorabilia, a venerable museum. Then there was the one, framed photo of me when I made the local newspaper as an All Star soccer goalie. The newspaper clipping had faded to sepia and in it I was diving for a ball, mouth open, fully outstretched. He beamed over the photo, in his gruff way. These memories often have a soundtrack of the hard clicks of skate blades on ice and the crashing of padded bodies against board and Plexiglas. 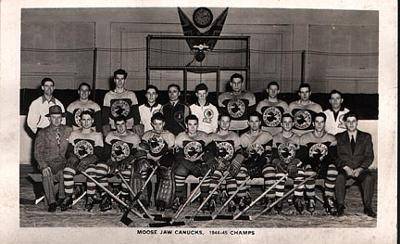 My granddad, Canadian born with Irish-American parents, played center for the Moose Jaw Canucks junior hockey league in 1941. He was on his way to a professional hockey career. But at age sixteen, after his brother Roger sank with the USS Arizona at Pearl Harbor, he quit hockey to join the Canadian army to support the efforts of World War II. He had to lie about his age to join. He was promptly kicked out when it was discovered six months later. He then traveled to Michigan where his parents’ family was from, and with a note from his father he joined the Marines Corp at seventeen. At nineteen, he landed on the shores of Iwo Jima.

As the Los Angeles Kings were making their miracle run to the Stanley Cup finals, I was unexpectedly excited. I am loyal to L.A. teams for sure, but I felt a deep tie to hockey. Except for a couple fans at the gym, I knew no one truly interested in talking about it. So I called my granddad. He’s been a Kings fan since they came to Los Angeles in 1967, coincidentally the year I was born.

He’s almost eighty-seven now. Over the years, I’ve spoken to him on the phone irregularly in short, polite conversations. I know he is not well and he tries to hide the persistent cough that laces his still commanding voice. When I called him last week, I bypassed our usual small talk and said, “How about those Kings!”  His voice lit 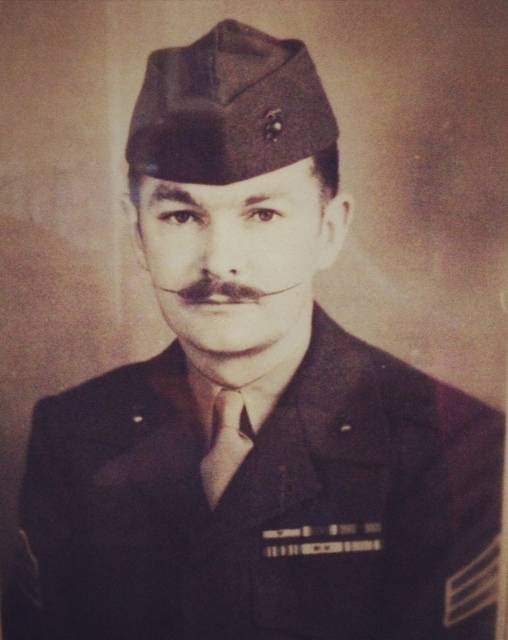 up as he rattled off every stat regarding the team’s road to the finals. I said, “I was thinking about coming over to watch game three with you tomorrow night.” I hadn’t seen him in years. He boomed, “That’s a great idea.” The upswing in his intonation touched me.

His once six-two frame has withered considerably, by many inches. His shoulders are nonexistent. His chest is sunken in. But he still has a presence. He still has a full head of hair. That day, his clothes were neat. His small house was spotless and now the entire place was a shrine to all things Marine Corp, not just the den. I recognized many things hanging on the walls. An oil painting of him in his dress blues. His framed Purple Heart. A black and white photo of him in a pressed khaki uniform, sporting a crazy twisted moustache that would be considered hip by today’s standards. I could hear the hockey game already in procession in the background.

“Get me a drink, will ya?” He said, sitting in a big, cozy chair twenty feet from the hanging flat screen. In front of him was an ashtray with a cigar. I poured him two fingers of eighteen year old scotch. “You can see the TV from there?” I asked. He wore no glasses. “Sure,” he said. “There’s seven minutes left in the period and that Doughty has the puck.” He’s hard on Doughty. He’s hard on all of them, he can’t help himself. I noticed a poster of the six men raising the flag at Iwo Jima. He has many things Iwo Jima since he personally witnessed the flag being raised, but this poster was signed by about thirty soldiers who had fought that battle, including signatures from the flag raisers who survived. “Is that original?” I asked, ogling the poster. “Yup,” he said. 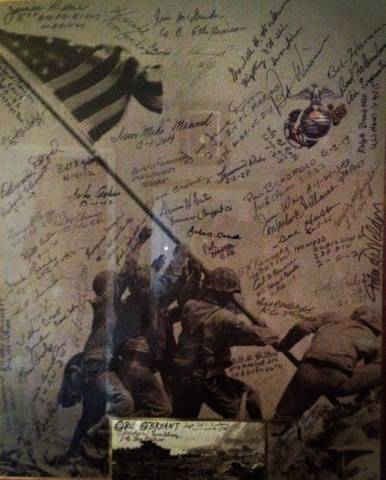 Instead of sitting on the couch, I sat on a small stool embroidered with the eagle, globe, and anchor that butted up against his chair. With the game on, which I could barely see myself, and over the sounds of scraping skates on ice, I started asking him questions about being a Marine, being a hockey player, about our family in Ireland. He asked me if I still had the newspaper picture of me as a goalie, which he had given me years ago. “I do,” I told him. I wasn’t sure if my many questions would piss him off, but he gladly recanted story after story, including his first date with my grandmother. He had taken her to a hockey game and a slap shot had sailed over the boards and smacked her in the knee. She was the one for him, handpicked by the hockey gods themselves.

I watched the desperate play between the Kings and the Devils. I watched Quick squat down so low and make saves so instinctually. I listened to my granddad yell at the screen, “Hit ‘im for Christ’s sake!” And quietly, I rooted so hard for them. Not necessarily out of loyalty to the L.A. team, but because I wanted them to win The Cup for my granddad. He had hung up his skates at sixteen – as a child – to lay his life on the line and serve our country. And for forty-five years, he has been a diehard Kings fan, a team that has never won the Stanley Cup and by all intents and purposes should not have made this year’s finals. I felt the Kings owed him this. It’s like he’s been holding out to see it, finally. It would piss him off if I were to bring up anything that metaphorically sentimental. He would ask me what the hell I was mumbling on about. Instead I decided to simply sit back on the Marine Corp stool and enjoy what the Kings had already restored.