How to Prevent Fear of Heights From Throwing You Off Balance

Human balance is a strange thing. Here’s some perspective from science and MovNat.

Balance is odd. It’s the result of complex interactions between the visual, vestibular, proprioceptive, and exteroceptive systems, as well as the motor cortex, brain stem, and a handful of reflex arcs. Human balance does some weird stuff, like disappear when we climb ladders.

Seriously. Ever notice how balancing is tougher when you stand on a ladder, chair, or tall platform? It’s true for most people. A person who can balance skillfully on a 24-inch platform will struggle if you raise that platform ten feet into the air. Even after years of teaching and practicing MovNat, I’m still challenged when climbing or traversing tall structures.

Why is it harder to balance on tall platforms? The surface is the same, the conditions are the same, but a typical ground-balancing master will sway, over-correct, and look clumsier than a three-legged horse when standing on a high ledge.

In MovNat, we talk about balance involving the physical mechanisms (posture, relaxation, sequencing) that keep your center of mass above the surface of support and the biofeedback mechanisms (visual, proprioceptive, exteroceptive, vestibular) that inform your state of balance at all times. If being up high impedes a person’s balance, then perception of height must interfere with either the physical or biofeedback mechanisms.

So, does it? I’m curious about how heights affect our physiology and how the MovNat explanation fits with primary scientific research on the topic.

Modern science doesn’t completely understand the systems affecting balance, but research during the last decade suggests that perception of height causes anxiety in all humans, which then compromises movement efficiency and impairs balance. We struggle on ladders for the same reason college basketball players shoot fouls at lower percentages during the NCAA tournament. We choke.

In ecological psychology, the conscious processing hypothesis contends that anxiety brings our focus inward, which disrupts subconscious task processing.1 We attempt to compensate by executing the task consciously, but instead regress to movement behaviors “characteristic of earlier stages of skill acquisition.”2

“If being up high impedes a person’s balance, then perception of height must interfere with either the physical or biofeedback mechanisms.”

During a series of experiments from 2002 to 2006, Dutch professor of movement sciences J.R. Pijpers evaluated the conscious processing hypothesis’ predictions about how anxiety influences movement behavior. Pijpers tracked test subjects traversing two identical routes on a climbing wall, except that one was a low route at 0.4 meters and the other a high route at five meters elevation.

After controlling for sources of bias, Pijpers found that “high on a climbing wall (i.e., under high-anxiety conditions), participants climbed less efficiently than low on the wall,” noting “longer climbing times,” “less fluent displacement of the body’s centre of gravity,” “increase in the number of [exploratory] movements,” longer grasping of hand-holds, slower movements from hold to hold, and less confidence in the subjects’ own abilities.2, 3, 4 The results were consistent with the conscious processing hypothesis and provide strong evidence that height anxiety has a deleterious effect on movement quality. 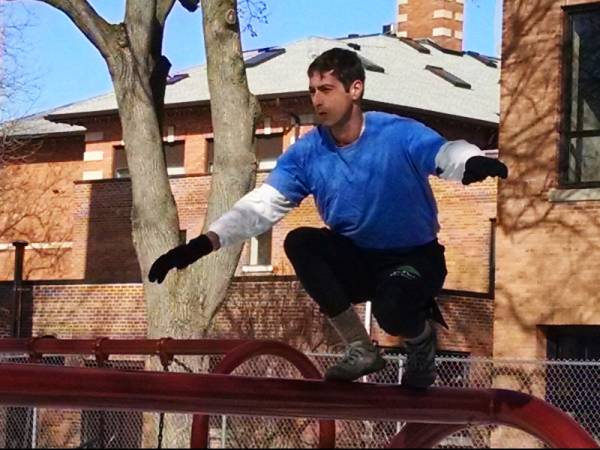 Physiological processes, from cellular respiration to a perfect muscle-up, are never smooth. They happen as a series of blind processes, over-corrections, over-corrections to the over-corrections, and so on. If you balance on one leg and look at your foot, you’ll see little muscles on opposite sides firing as the myotatic reflex tries to stabilize your shifting weight. When these muscles don’t fire with precise timing and intensity (indicators of high movement quality), balance is degraded.

The link between anxiety and poor physical performance is well documented. Pijpers’ work suggests that balance can be compromised by anxiety. But does being up high always cause anxiety? To answer this question, we need the work of Jeanine Stefanucci and Dennis Proffitt. From 2007 to 2010, psychologists Stefanucci and Proffitt investigated the relationship between fear and the perception of height. During several experiments, test subjects stood on or underneath balconies, and then estimated both heights of the balconies and sizes of circular targets.

Subjects consistently overestimated the heights and sizes; however, the biggest overestimations always happened when subjects stood on top of the balconies. Subjects also reported the highest anxiety on the balconies (which had ledges and railings).5 Bottom line, if you’re a human, standing on top of something, you think you’re higher than you are. Then, you freak out and easy movement patterns become difficult as your physical skills regress to earlier states of motor learning.

I don’t know what specific mechanism causes anxiety when we’re on top of balconies. Evolutionary psychologists would probably say there’s some vestigial height awareness left over from our tree-dwelling ancestors. Evolutionary psychology is tough to prove, but it seems plausible to me that all humans are instinctively wary of heights.

“Bottom line, if you’re a human, standing on top of something, you think you’re higher than you are.“

So, you stand on a tree branch. Perceptual limitations interfere with your biofeedback mechanisms while anxiety interferes with the physical mechanisms required for balancing. You’re pretty much boned because your brain thinks you’re somewhere up in the thermosphere, has given up on coordinating your balance, and left you to handle it. What do you do? 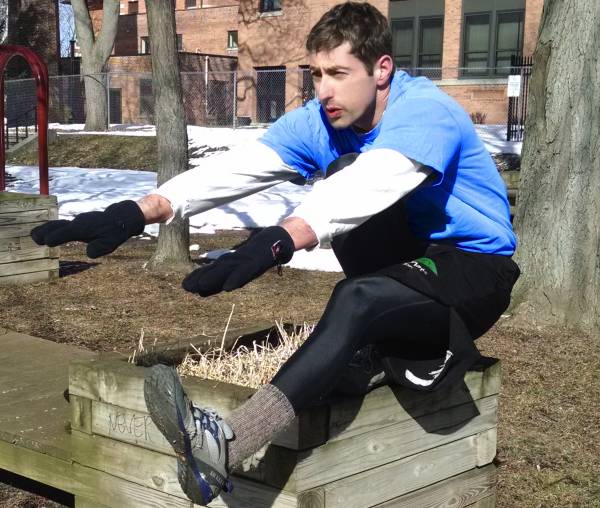 From the MovNat point of view, balancing on a scary tree branch is simply a more challenging version of balancing on the non-scary ground. We adapt to challenging environmental demands by focusing on three fundamental principles of quality movement: posture, relaxation, and sequence.

Being human is pretty cool. We get to enjoy ice cream, heavy metal, and darling kitten videos. But this comes with some evolutionary baggage. Freaky height perception and balance impairment are some of that baggage.

By practicing sound movement principles, we mitigate our evolutionary limitations, adapt to challenges, and perform at our best in any environment. Except volcanoes.