These shoes were created with functional fitness in mind, and they stand out from other inov-8 products I’ve tried.

According to inov-8, the f-lite 235 is actually the first of their shoes designed specifically with functional fitness in mind. The previous models were based off mountain racing flats.

RELATED: A 12-Step Plan for Transitioning to Minimalist Running Shoes

While you may have been a fan of inov-8’s shoes over the years, it was hard not to face the fact that functional workouts did a real number on them. They’ve always been considered great shoes to work out in, pretty unanimously, but they weren’t known for their durability. With the f-lite 235s, inov-8 aims to change that situation.

The toe bumper is intended to help with the wear and tear from burpees, while the expanded Rope-Tec is for not only withstanding rope climbs, but also helping you grip the rope better. If you’ve climbed ropes in minimalist shoes, you know it can be a challenge to get your foothold. I was not able to test this with mine, but from other reviews I’ve read, the Rope-Tec works well. 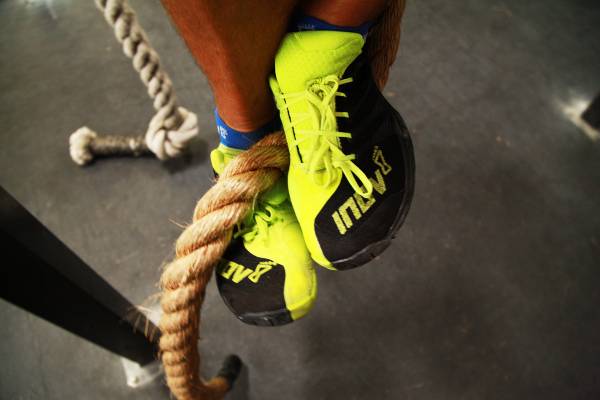 Despite the light weight, these shoes feel more substantial, and therefore more durable, than previous models of inov-8 that either I or our second tester have worn. In addition, the gripping ability of the outsole feels improved, which makes a difference when your workout routine is constantly presenting you with different scenarios.

Of course, these shoes come in crazy colors. From early on, inov-8 figured out that flashy colors go a long way in the athletic footwear world. And you know what? As someone who used to own about three dozen pair of etnies, I’m totally down with that.

“If you’re a CrossFit athlete or anyone who likes minimalist shoes, but regularly puts them to the test, the f-lite 235s are something you should look into and at least give a test drive.”

The 235s certainly don’t disappoint. The women’s version comes in: Purple/Yellow, Black/Grey, and Blue/Pink. The men’s comes in: Black/Grey, Black/Yellow, and Chili/Blue. All of the color combos are split down the middle in a bit of a Jekyll-and-Hyde design. 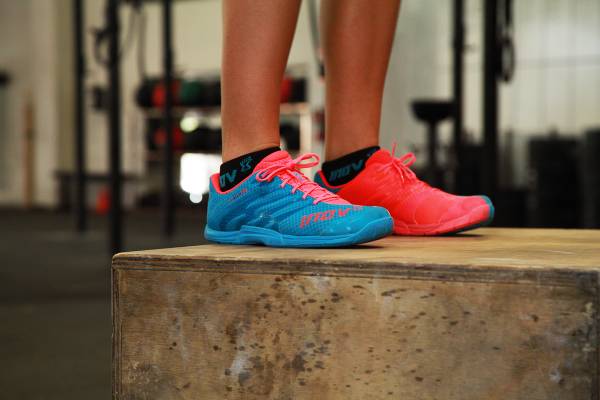 While inov-8 says this shoe has a cushioned forefoot, to me there is not much actual cushioning going on there. I may be biased, though, as my Saucony Kinvara’s are downright fluffy in the forefoot and that’s how I prefer my minimalist shoes.

On the other hand, the inov-8 feels as though it has a rather stiff arch support, which is not to my taste. We had two people testing these shoes and both of us found them a little stiffer than we expected. Two things to consider, though:

READ: What You Need to Know About Buying Running Shoes

To me the breathability of the shoe can also be an issue. If you are indoors or in a hot environment the meshy fabric is great for keeping your feet from becoming a soggy, sweaty mess. If you go outside in the rain or into a damp environment, though, you are going to quickly have wet feet. So while the inov-8 website rates these for indoor, outdoor, and rope usage, I would be cautious with your outdoor adventures in these.

READ: Running Shoes: What You Need to Know to Buy the Right One for You

If you’re a CrossFit athlete or anyone who likes minimalist shoes, but regularly puts them to the test, the f-lite 235s are something you should look into and at least give a test drive.