When John Wayne “The Gunslinger” Parr was thirteen years old, he fell in love with a man. The man was Jean-Claude Van Damme and JW had just seen the movie Kickboxer. He fell in love with him as a hero. We hear so much about the possible negative influence of violent movies and video games on adolescents, but Kickboxer was the catalyst that inspired John Wayne to become the Champion of the World nine times, winning two of those titles in Thailand, the birthplace of muay Thai.

JW was kind enough to share some of his experiences with me recently. He told me that when he went to Thailand in 1996 at the age of nineteen, it wasn’t easy to find a training camp. The Thai people depend upon muay Thai to make a living and frown upon training foreigners. The Australian native explained:

In 1996 not many camps would take westerner fighters, the Thais didn’t want to share their secrets in case one day we got too clever and started beating them at their own game. When I won a big tournament in Thailand winning one million baht, my Thai trainer did a radio interview. They asked him, “Why would you teach a farlung our secrets to take our money out of the country?” He told them I was like a brother so what was he supposed to do?

Training in Thailand was a dream come true, but Parr missed his life in Australia. “It was crazy. At nineteen years of age I move to Bangkok and I was the only white person in the area the size of Brisbane. No one spoke English. TV, radio, and newspaper were also in Thai. Back then there were no phones or Internet, if I wanted to talk to Mum I would have to post a letter, then wait two weeks for a reply.”

He slept on “a wooden floor side by side with the other fighters. My toilet was a squatter, and I had to pour water into my hand to wipe my bum.” Although the lifestyle began to seem normal after a couple of years, JW doesn’t miss it now that he’s back home.

Having a toilet paper isn’t the only thing that’s different. On June 23, 2012, JW fought in the first Caged Muay Thai event in Australia and defeated Jordan Tai in the fourth round. The new promotion has all of the same rules of the ring, but fighters face off in a cage wearing 5oz MMA gloves.

As JW explained, “Everyone loves the cage in Australia, but ninety percent of people I talk to say they don’t like the groundwork. All the most exciting parts of UFC are muay Thai strikes anyway, so why not give the fans the best part of a product?”

The fans have wholeheartedly embraced JW’s new concept, but the fighters also love it. According to JW fighters like it because, “What you can do in training you can’t do on the ring because your hands are in big clumsy gloves. With the fingerless gloves you can grab kicks, use your hands in the clinch and are a lot more free to pull off cool tricks.”

JW has since begun referring to the traditional gloves as “bitch mittens,” but they didn’t hold him back in the ring. In addition to his nine world titles in muay Thai, he is the former Australian middleweight boxing champion. Of all of his opponents, The Contender: Asia winner Yodsanklai stands out: 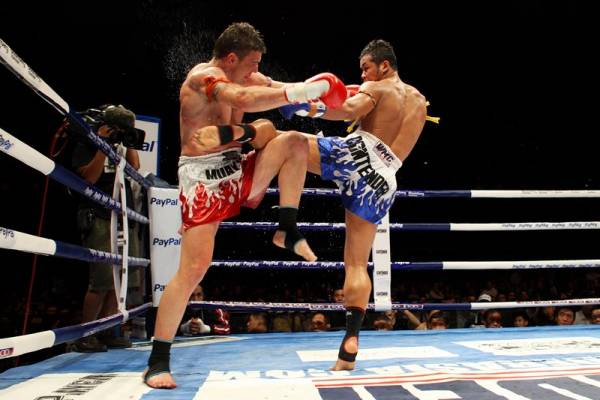 Yodsanklai was my nemesis for a number of years. He was a southpaw, and kicked and punched the hardest I have ever felt in 114 fights. We fought three times, and every time I was busted up, bruised and swollen. The third time we fought I was lucky to win on split points, but still ended up with fifteen stitches and a right arm that needed X-rays to make sure it wasn’t broken.

To the average Joe, fifteen stitches is a big deal but in total, Parr has had 216 stitches over his career. He’s been in a lot of wars. To prepare, JW told me:

I run 12km in the morning then train another hour on pads and ground work. Afternoon run another 5-7 km then 2 more hours pads and bag sparring. Thailand was a whole different world though, 3 hours morning, 3.5 hours afternoon, 7 days a week. All we did was eat, sleep and train. I do not miss those days.

In fights, JW described his style: “I like using my hands. I also have a pretty good left kick to the body helping me win a lot of fights. My front kick was also a good tool to get me out of trouble when being attacked.” There’s a lot more to a fight than striking though. I wanted to know how John Wayne mentally dismantled his opponents. Turns out, a big part of that was his defense. “Once people realize they couldn’t hit me after a round or two, I would watch their body language change. From that point I knew the fight was going to be mine.”

The caged fight in June was Parr’s final fight. His focus now is training others at Boonchu Gym in Australia. JW shares his 25 years of experience in seminars across the country but he has also released an instructional DVD set called Locked & Loaded, which covers muay Thai techniques from the fundamental strikes to advanced drills and pad work as well as the clinch and grappling. (Check back soon for my review of Locked & Loaded.) 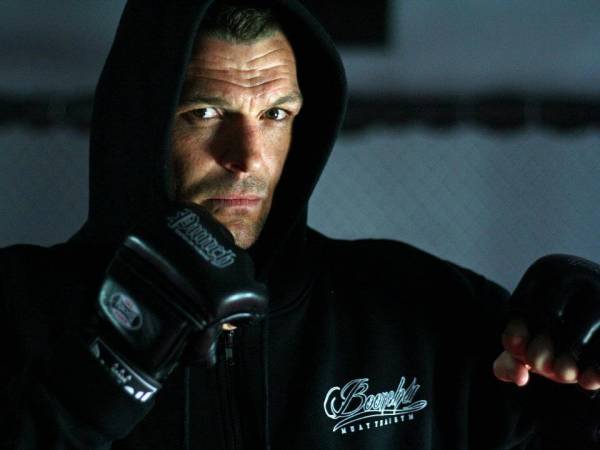 Although I discovered muay Thai in 2008, I’ve only recently begun training regularly as I focused primarily on Brazilian jiu jitsu since then. JW said the biggest mistake beginners make is focusing too much on weights. He said, “You are not going to be a great fighter because you lift something heavy. You’re only going to be a better fighter by training to be a fighter.”

The best way to condition the body, according to him, is to “spar as much as you can. That is the closest thing you are ever going to get to a fight. This is where you are going to learn muscle memory and hopefully fight time you have seen it all before and nothing is going to come as a shock to you.”

Now that JW has hung up his gloves, only one person could lure him back into the cage: Buakaw. “It would be the biggest fight on the planet and as a promoter I am sure we could fill any stadium in Australia. Besides that I am quite content on my career, I fought all the major fighters in the world. Win, lose or draw they were always entertaining fights.”

In or out of the cage, John Wayne Parr continues to be an ambassador of the sport with his Caged Muay Thai and his amateur promotion Tomorrow’s Champions. Be sure to check out Caged Muay Thai and JWP’s Facebook pages to keep up with the latest news about the evolution of this exciting promotion.