Is Choline Deficiency Killing Your Performance?

Ninety percent of adults aren’t getting enough vitamin B4, and one hundred percent of athletes need it for peak performance.

If you dedicate time and effort to achieving your potential in the gym or on the playing field, you don’t want to leave any stone unturned. A lack of essential vitamins, minerals, or nutrients will compromise your recovery and potential to grow bigger, stronger, and faster.

One vitamin in particular goes largely unnoticed. Choline, sometimes referred to as vitamin B4, plays a major role in supporting focus, building strength and power, and accelerating recovery. Unfortunately, if you’re over nineteen years old, the research shows there is a greater than ninety percent chance you’re not getting enough of this key nutrient.1

Increased strength, power, focus, and recovery are all supported by vitamin B4. Are you getting enough?

Choline is a water-soluble vitamin grouped with the B-complex family of vitamins. It acts as a precursor to the neurotransmitter acetylcholine, which plays a major role in supporting nervous system function in the body, a key area for any serious athlete. While many of the positive adaptations you experience from lifting heavy weights or performing explosive movements are due to building muscular strength, your nervous system also plays an important role.

Your nervous system adapts, becomes more efficient, and allows your muscles to fire with increased potency. These neurological adaptations require acetylcholine, but you can’t eat acetylcholine. However, you can increase your dietary or supplemental intake of acetylcholine precursors like choline to improve your power, performance, and recovery.

While most athletes are familiar with creatine and protein supplements to support intense training, acetylcholine precursors like choline or alpha-glycerylphosphorylcholine (A-GPC) may hold the potential to unlock significant gains in strength.

A recent study of college-aged males investigated the impact of only six days of A-GPC supplementation on lower-body and upper-body isometric strength. The trainees performed a mid-thigh pull on a force plate and an isometric push-up style press using a load cell. After supplementing with 600mg of A-GPC for 6 days, the athletes had significant gains in lower-body strength.2 (See figure below). While they also showed mild improvement in upper-body isometric strength, the results weren’t statistically significant. 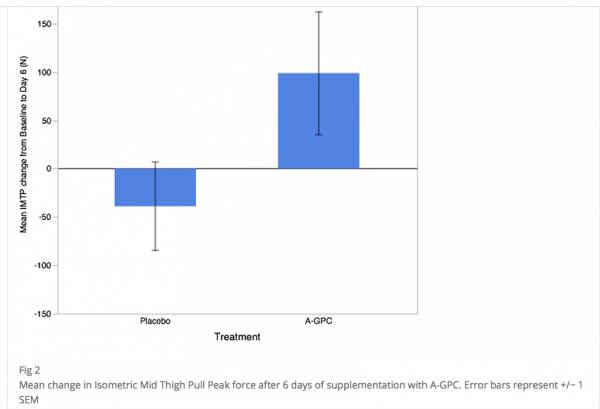 In the brain, acetylcholine acts as a neuromodulator, a chemical that impacts your mental focus, arousal, and motivation. New research shows A-GPC may have significant impacts on anabolic hormone response to exercise, specifically growth hormone (GH), which is responsible for many of the positive adaptations experienced from training, such as increased strength and lean muscle mass.

Recently, a randomized, placebo controlled-trial of thirty-year-old men examined the impact of 600mg A-GPC supplementation before training on growth hormone response. The athletes performed 6 sets of 10 reps of squats at 70% of their 1-rep maximum, followed by 3 sets of 10 reps of bench press at 50% of their max. The athletes’ growth hormone levels were then tested immediately post-exercise, and again at 5, 15, 30, 60, 90, and 120 minutes post-exercise. Researchers found growth hormone release post exercise peaked 44-times higher with A-GPC supplementation compared to placebo.3 (See figure below). 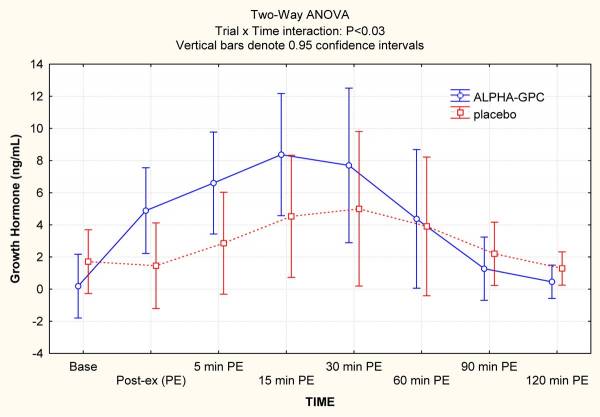 In 2012, a higher, single-dose of A-GPC (1,000mg) was used in healthy young adults and researchers also found significant increases in GH release post-training, as well as increased fat burning via the liver.4 This can benefit overweight individuals or athletes who will typically have increased hepatic (liver) fat stores, making A-GPC a nice addition for athletes looking to improve body composition.

Intense exercise is exhausting and can impact how well you think and focus on the playing field or during competition. Any nutritional or supplemental intervention that can buffer the training-induced declines in reaction time or focus can play an important role in improving performance.

A recent study of active men and women tested the impact of a supplemental A-GPC formula (containing other choline forms of acetylcholine precursors) after 10 minutes of exhaustive exercise. First, all the athletes had to answer a questionnaire on feelings of focus and alertness, and perform a 4-minute quickness and reaction time test.

Next, they engaged in 10 minutes of exhaustive exercise. Once the athletes were tired, the researchers repeated the initial alertness and reaction time testing to see how the intense training impacted their mental function. Over the course of four weeks, the athletes consuming the pre-workout A-GPC formula were able to maintain their initial reaction time and alertness to significantly greater degree than the placebo group.5

Acetylcholine also plays a pivotal role in building your resiliency by supporting your natural daily hormonal rhythm. Choline supports the hippocampus area of your brain, which sets your daily circadian hormonal output.6 Cortisol is your body’s natural stress hormone, produced at higher levels in the morning and lower levels at night. If you’re run down and tired from intense training, your daily circadian cortisol rhythm will suffer and you’ll find yourself sluggish in the morning, hitting snooze multiple times, or struggling to fall asleep at bedtime.

Stress damages the hippocampus area of the brain, lowering your resiliency and potentially your performance in the gym. Increasing your choline intake can help support your brain and hippocampus function. 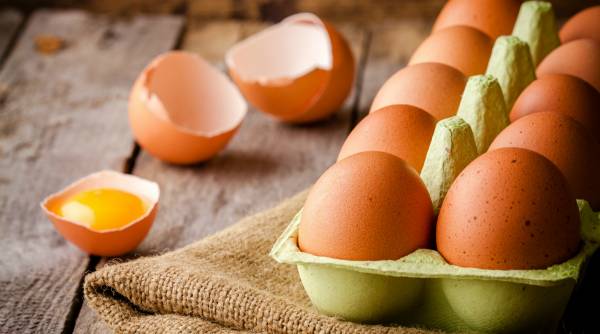 Increasing your intake of choline can help support your athletic performance, as well as brain and hormonal function.

Get More Choline In Your Diet

Your diet should always be the first place you look to ensure you receive all the essential vitamins, minerals, and nutrients your body needs to perform at its best. Research supports increasing your intake of dietary choline as an effective way to boost your acetylcholine levels in the body.7

The quickest way to boost your choline intake from food is to add more whole eggs into your nutritional arsenal. Each egg yolk provides a whopping 100mg of choline, so if you’re an “egg-white only” athlete, it’s time to start adding back the yolks. Your next best bet is organ meat. A 3oz portion of beef liver provides about 250mg of choline. Incredibly, organ meats are one of the most nutrient-dense foods, and are also the most affordable cuts of meat at the deli counter. So no excuses. Load up!

Here is a list of the best dietary sources of choline:

Raw dairy provides 45mg of choline per 8oz, but pasteurization destroys 70-80% of choline.

If you want to impact your performance in a shorter time frame, adding an acetylcholine precursor supplement is the best way to quickly increase your levels. Aim for 4-8 weeks of 600-1,000mg of A-GPC 60-90 minutes before training to upgrade your performance and recovery.

Charts courtesy of the Journal of the International Society of Sports Nutrition.