Zumba has become a very popular form of exercise over the past fifteen years. According to Zumba Club, 2012, it is currently performed by over twelve million people, in 125 countries throughout the world, and at 110,000 sites.

A little historical perspective: Zumba was actually discovered by accident in Columbia in the mid-1990s by celebrity fitness trainer Alberto Perez. Alberto forgot to bring his regular aerobics music to a session one day. The only music he had was a few Latin music tapes in his car. He proceeded to ad lib the session by dancing to salsa, rumba, and merengue, and let the music motivate him, just as if he were in a club. His participants loved it and the Latin-inspired dance workout was born.

One of the reasons Zumba has become so popular is that Alberto claims, “There is no right or wrong way to do it.” Participants are encouraged to move to the beat of the music in their own style. Also, choreography is less structured as compared to other group exercise classes.

Despite its popularity worldwide, there is very little research documenting the actual fitness benefits of Zumba. Let’s take a look at this activity, popularized by the catchphrase “Ditch the workouts – join the dance party.”

A study at the University of Wisconsin-La Crosse, published in the Journal of Sports Science and Medicine, was designed to determine the average exercise intensity and energy expenditure during a Zumba session. Nineteen apparently healthy female volunteers were used in the study. All subjects had experience at participating in Zumba. Pre-study, the subjects completed the PAR-Q and provided written informed consent. The research protocol was approved by the local Institutional Review Board.

Each subject performed an incremental, maximal treadmill test with measurement of heart rate (HR) and oxygen consumption (VO2). An individual linear regression equation from the study was developed for each to predict VO2 from HR. This equation was also used to predict VO2 (ml·kg-1·min-1) during the Zumba session for each subject. Energy expenditure was calculated from the predicted VO2 data assuming a constant of 5 Kcal·L-1 of O2 (5 calories used per liter of oxygen) consumed. Pilot studies in a subset of the study group (n = 3) had demonstrated that the HR-VO2 relationship during treadmill exercise accurately reflected the HR-VO2 relationship during a Zumba session.

After the treadmill test, all subjects participated in a single Zumba session. The Zumba classes were all taught by the same ACE-certified instructor. The subjects wore a radio-telemetric heart rate monitor during the session. The HR data was subsequently inserted into the individual HR-VO2 regression equation to estimate VO2 and energy expenditure.

Here are the results of the average physiological responses to the Zumba session (the mean session time was 38:48):

What can be made of these results? According to the American College of Sports Medicine, exercise should be performed between 64-94% of HR max or 40-85% of VO2 max to improve cardiovascular fitness. All of the subjects who participated in the Zumba sessions were within these guidelines (79% and 66, respectively). These parameters should be sufficient to improve cardiovascular fitness, even considering the range of fitness levels among the participants. 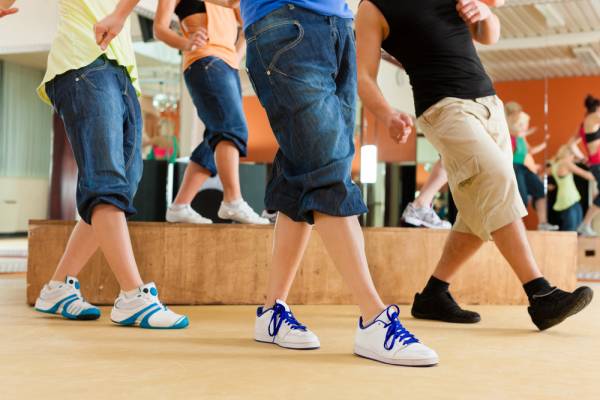 The ACSM also recommends that individuals expend 300 Kcals per workout for the purpose of fat loss and to maintain a healthy body weight. The participants in this study used an average of 9.5 Kcal·min-1, or 369 Kcal for an entire session. It should be noted that average class length in the current study was approximately 39:00 in length. Longer classes would obviously result in more energy usage.

Another study conducted at Adelphi University examined the exercise intensity of Zumba sessions. It reported caloric expenditure during Zumba to be between 6.6 and 7.4 Kcal·min-1 (less than the Wisconsin-Lacrosse study). This was dependent upon the variation of dance style used. Also, the oxygen cost of participating in Zumba was lower than in Wisconsin-Lacrosse study (6.6-7.3 METs vs. 8.8 METs). They surmised these differences could be attributed to subjects

actually wearing the metabolic equipment while dancing in the Adelphi study. This may have restricted dance movements, thus resulting in a lower energy usage. In the Wisconsin-Lacrosse study, subjects wore only a HR monitor and energy use was estimated from individual HR-VO2 regression equations developed from the incremental treadmill exercise test. Also, there seems to be a wide range in the intensity efforts in Zumba and other group fitness classes, depending upon the choreography and enthusiasm of the instructor. The enthusiasm of the instructor and the experience of a group setting can motivate the participants to work harder. This cannot be replicated when following popular DVD workouts.

Despite the differences and the variable effectiveness, the growing popularity of Zumba warrants further research to validate this growing fitness trend. So, to Zumba or not? Here are my suggestions:

Zumba can be a part of a cardiovascular and/or fat loss program. But if you simply coast through the movements, fail to exert, and eat poorly, it is no better that any other group exercise trending now.