Like spinning before it, rowing has gone from being a competitive outdoor sport to one of the growing new trends in group exercise. At the forefront of this movement is coach Josh Crosby.

Like spinning before it, rowing has gone from being a competitive outdoor sport to one of the growing new trends in group exercise. At the forefront of this movement is coach Josh Crosby. Crosby believes strongly that indoor rowing is the perfect exercise for people of all body types and fitness levels, from beginners to professional athletes.

Crosby came to rowing through family tradition. A third generation rower, Josh first hit the water at the age of 8, earned many accolades throughout high school and college and finished his rowing career off on the U.S. National Team having won several World Championships.

His first foray into coaching came when he was on the National Team in the 1990s. At first it was a way to make money on the side, but it quickly grew into a passion and in 2004 Crosby founded “Indo-Row.” Inspired by indoor cycling, Crosby thought indoor rowing was a no-brainer. “I wanted to spread my love for rowing, the benefits that rowing can deliver, the ‘team’ mentality that rowing nurtures and bring it everyone,” says Crosby. Starting with one machine in his house in 2004, Crosby has since grown Indo-Row to nearly 75 locations around the world.

Anyone Can Do It — Indo-Row was designed to bring the benefits of rowing to the masses. Crosby has had students ranging in age from 10-94, as well as coaching students who were severely overweight and unable to perform other types of exercise.

Total Body — The biggest myth about rowing is that it is an upper body workout. Rowing works 9 major muscle groups: quads, hamstrings, glutes, lats, core, shoulders, triceps, back and biceps. In addition rowing is an amazing cardio workout.

Low Impact – Rowing is great for injury prevention, rehab and runners because it is a low impact alternative to other activities. For those who are overweight, the sliding seat displaces ones weight so the load on their body is less and they can make a smooth transition to other activities as the weight comes off.

Team Work – Rowing in a group setting like Indo-Row provides a huge motivational booster through the community spirit. Indo-Row is taught with the same team mentality you find in an actual boat, racing together.

Easy to Learn – The basics of indoor rowing can be learned in 10 minutes or less. 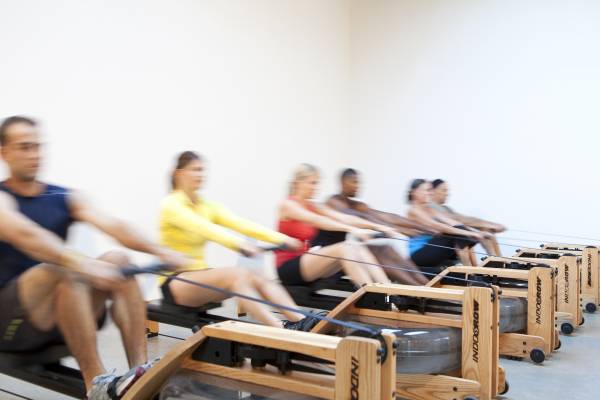 You’re In Control – Resistance is created by how hard you push or pull, so you control the level of your own workout. The Indo-Row machines actually use 17-liters of water to give you the resistance similar to being on a boat. Simply, the harder you push and pull, the faster the water moves and the more resistance you feel. Your time and pace improves as you row harder.

Calorie Burn – In the average Indo-Row class, people burn between 400-800 calories in a little less than an hour.

Measurement Is Motivation – Typically indoor rowing machines, Indo-Row models and otherwise, have monitors displaying your total time, distance, calories, and pace. This allows you to actually know if you are getting. Having milestones provides motivation to continue working hard.

Beyond the physical benefits, there are mental benefits to training indoor rowing. “Mentally rowing makes some very tough men and women,” says Crosby. “Those monitors don’t lie and hold you accountable for every stroke. For your other workouts or competition, rowing teaches you not only how to pace yourself, but how to ‘empty the tank’ when you need to. From Ironman competitors to MMA fighters, I would love to get some of those folks on the Indo-Row machine. I know it could help them become even more focused and strong throughout the miles or rounds.” 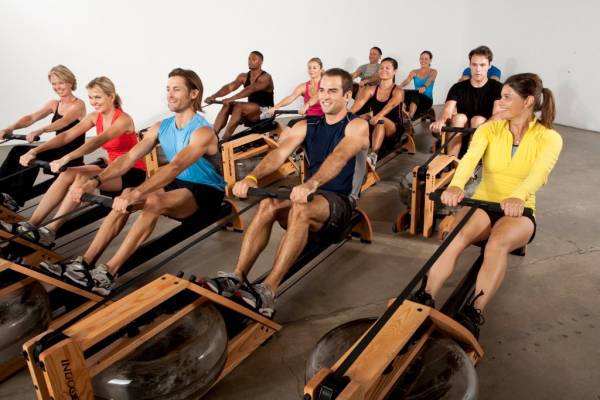 As with any workout regimen, you should always check with your doctor before trying a new activity. Due to the low-impact nature, rowing is a very injury friendly activity. While there are body types favored in competitive rowing, when it comes to personal fitness, indoor rowing is an excellent choice for all ages, fitness levels and body types. Crosby’s own grandfather was an indoor rowing world champion at the age of 93. Another client of Crosby’s weighed 350bs when she began training with him. In her first 9 months of Indo-Row, she lost 85 pounds and placed 2nd in her age group in an indoor rowing competition.

To find an Indo-Row location hear you, visit www.IndoRow.com or to find Crosby specifically, visit www.JoshCrosbyFitness.com.