It’s a thought that comes up often during workouts – just how much weight are you moving while performing a push-up? And what is the difference in load between a knee push-up and a toe push-up? Or what about an elevated push-up?

Recently researchers at a handful of universities in Michigan, Wisconsin and Pennsylvania endeavored to answer this question. The goal of their study, Kinetic Analysis of Several Variation of Push-Ups, was to create a hierarchy of push-ups based on the training load of each variation. Previous studies had examined the differences in load caused by varying hand placements, but no one had ever examined the effects of feet or hand elevation.

Also noted in the study were subjects body mass, gender, and height. Researchers were curious to see if there was a difference in load based on gender or on height differences. 23 individuals termed “recreationally fit” were observed by researchers and performed six variations of the push-up:

The width of the pushups was the width equal to the distance between the individual’s acromion processes. Width was measured from the inside border of each hand with hands placed under the shoulders with elbows fully extended. 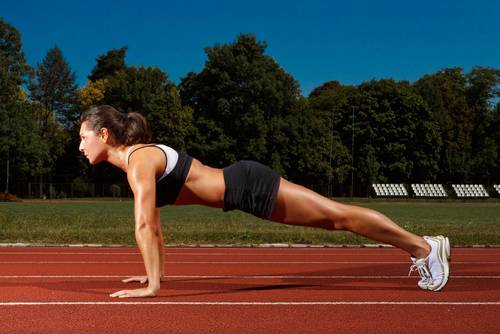 From the measurements, researchers were able to determine load as percentage of bodyweight for each type of push-up:

Researchers determined kinetic characteristics did not vary between genders nor did subject height did have a correlation with GRF, except for when the hands were elevated to 60.96cm.

It is the hope of the researchers the information gathered in this study will help trainers order push-up progression from lower to higher intensity for their clientele. In addition it should help them relate the push-up to resistance movements by knowing the approximate load as a percentage of body mass. This would enable trainers to determine similar loads using free weights or other means of resistance training.