Learning Sucks, But You Should Do It Anyway

When I was 4 years old I could read at a 4th grade level, but I couldn’t tie my shoes so they weren’t going to let me into kindergarten. Find out what this has to do with your athletic performance.

When I was four years old I could read at a fourth grade level, but I couldn’t tie my shoes so they weren’t going to let me into kindergarten. I have a September birthday, so I was one of those kids doomed to either be younger or older than everybody else in class. My mom was lobbying for the school to let me in even though I was on the young side. It was ultimately up to the teacher herself and she requested to meet me. It was at this meeting that I would be required to demonstrate my shoe-tying abilities.

My parents, in an effort to not have shoelace tying be the thing that would prevent me from access to an education, began what was in essence a shoe-tying boot camp. Every afternoon I would practice with my mother, watching her perform the skill and attempting to replicate it with my soft, puffy, little fingers. Every night my father would come home from work and ask me to demonstrate.

For some reason it always made sense when I watched my mother, but when I tried it myself I could only ever get one loop to form. Like little one-eared rabbits, my shoelaces inevitably turned out unsymmetrical. Being put on the spot by my father invoked a great deal of anxiety as well, so the only knots properly formed each evening were the ones in my stomach.

Night after night I could only make one loop happen, no matter how intently and slowly my father demonstrated. “Like this. See?” he would say after cringing at my failed performance. And I would try again. I remember thinking it was like magic as I bent and wound the laces. I would make that final pull and say a little prayer for two ears. No, only one. Night after night. Again and again.

And then it was the last night. The meeting would be the next morning. My father would go to work. My mother and I would go to the school. I sat on the floor in front of my father, not wanting to start the process. My heart beat in my ears and I stared at the laces. I twisted them, pushing them with my fingers and willing them with my mind. And this time, when I made the final pull a miracle occurred. Two ears. Two loops. A proper knot. Relief and exaltation. I would be allowed into school after all. I went to my room to enjoy a celebratory night of reading.

The next day my mother and I met with the teacher. She spoke to me about my interests. She asked me about my favorite books. And then she asked me to tie my shoe. I was nervous, but I was confident I remembered just how my father showed me. I played it out in my mind. I knelt down for the ultimate execution of the task.

And there was only one ear where the previous night there had been two.

I was struck silent. My mother was still. The teacher stared at my shoe. My final performance was, without question, an utter failure.

The teacher paused, and then smiled. “How about we give kindergarten a test run?” she offered. She suggested I go home and practice my shoe tying a bit more.

When my father came home that night he asked how I did. I told him I hadn’t been able to tie my shoes properly. “But you did it last night!” he exclaimed.

And I have done it at least a million times since. It’s so simple now I don’t even remember to think about it. I have to stop and imagine the process in my head to even recognize there is a process. And so it is with everything we learn. 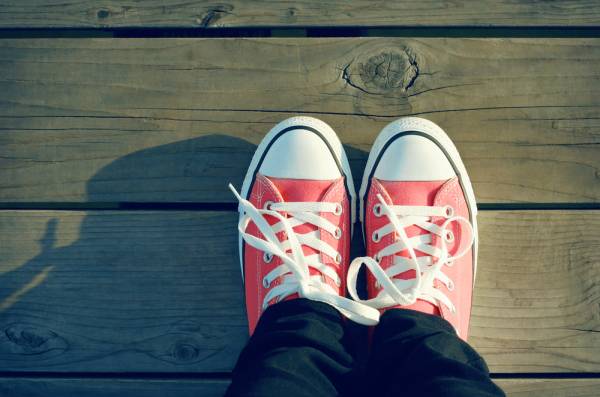 When you first picked up a barbell, dumbbell, or kettlebell, it felt awkward and strange. You would watch the instructor demonstrate and fail in your replication. It felt alien. It felt impossible. And now you pick it up every day like it’s nothing. It used to be that a kettlebell snatch was hard. Now it’s like reciting the alphabet.

Learning is hard. It is uncomfortable, even painful. Learning sucks, but you should do it anyway. You will practice and practice. You will fail. Your nerves will get the better of you and you’ll forget all over again. But I can tell you I gained some valuable things from learning to tie my shoes that have nothing to do with laces:

So I wish you today a day full of funny-looking knots, failed lifts, toppled box jumps, and bungled technique. I wish you a week of failure and a month of misses. And at the end of it all I wish that you forget that you learned, but not what you learned.

Keep working. Keep trying. And in the face of adversity you never know what might come along to save you. As my mother still likes to joke today, “If only we’d had Velcro back then, you’d have been okay.”