Life of a Strongman: An Interview With Tom McClure

Get a glimpse inside the life and training regimen of a professional strongman.

Like many of us Tom McClure first discovered strongman competitions by stumbling across them on television. Unlike the rest of us, he called up a local strongman gym, started training, and in 2005 became the North American Amateur National Champion.

Growing up Tom played all the sports – baseball, basketball, football, track and field – but he was particularly focused on martial arts. As he grew older he discovered lifting weights and realized he was particularly adept at it. It was then he noticed the strongman competitions on television. He looked up a local gym, called them up, and started training.

Strongman training hooked Tom instantly. One of the things he found appealing, and he believes audiences find appealing, is that strongman events seem more comprehensible than regular powerlifting. While it might be hard to fathom what it actually takes to deadlift 800lbs, you can grasp what it would mean to pick up a car. Said Tom:

The thing about strongman is a lot of things come up that people make up, like picking up a car and carrying it a hundred feet, or roll the car over, and weird stuff like that. Stuff like that people can actually put two and two together and imagine what it’s like to flip a car over.

When it comes to training it’s not that complicated, though. As Tom explained:

You’re always training heavy. It’s a lot of basic powerlifting stuff, a lot of deadlifts, a lot of squatting, and a lot of heavy overhead pressing. Just a lot of the basic compound lifts.

A strongman training day usually consists of three to five hours. You try to cover four or five events. If you’re going heavier, it takes time to get up to the heavy weights. You’ve got to start out light and get warmed up, work your way up to heavier weights and heavier events

One thing particular to strongman competitions is all the grip-work required. According to Tom, farmer’s walks are one of the best ways to build grip. Said Tom, “The farmer’s walk will probably tax your grip more than any other thing out there out, and also just doing the events over and over.”

At the competitions themselves athletes will typically do four or five different events over one or two days. Sometimes, however, competitions can extend to three or four days. In 2007 when Tom competed in Ukraine at the World’s Strongest Nation, he did seventeen events in three days, including a sumo match.

The United States is one of the few countries where you have to earn a “pro card” to compete as a professional strongman. These pro cards are rare and are given only to the winners of certain national competitions. For Tom, that win back in 2005 where he became the North American Amateur National Champion was his ticket to the pros. Tom considers the highlight of his career to have come in 2007. In 2007 he qualified for the finals at the IFSA Strongman World Championships and ended up finishing in tenth place in the overall competition. 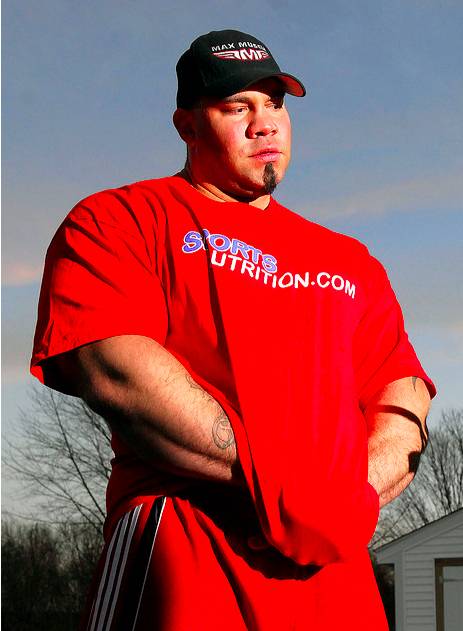 The length of a strongman’s career is not a long one, however. To those of us watching it may seem obvious that it is a sport rife for injury. The movements are strange, the objects are oddly shaped, and the weights are ridiculously heavy. When asked about injury, Tom had this to say:

I’ve probably had a dozen injuries in the last three or four years alone. You can try to ice your muscles when you get done, try to stretch, try to just take days off when you need to. Sometimes there just nothing left, though. You can’t help but get hurt because some of the lifts are so awkward.

These days Tom’s body can’t take the abuse of the strongman competitions anymore, but he still has his competitive spirit. He has chosen instead to focus his energies on bodybuilding competitions. He has not let go of strongman, though, and coaches people out of Derek Poundstone’s gym in Waterbury, Connecticut.

While a strength training background is good for strongman, Tom recommends people start young, while their bodies are still fresh and to find a good coach. Said Tom, “A lot of guys when they first start out it’s kind of awkward, so we can coach them along and show them the right techniques, the right way to do things, and the wrong way to do things.”

For those wanting to get into the sport, Tom shared this bit of advice:

For anyone who wants to get started, try to ease into it, don’t jump in there and try to do all the big weights and try to impress everybody by lifting all these heavy, heavy weights. Just take it easy and work your way up.