Love on the Mat: The Story of Lisa, Greg, and BJJ

Love is in the air – and at the academy. Get into the Valentine’s Day spirit with the story of two people who met and fell in love thanks to Brazilian Jiu-Jitsu!

Each of them came to BJJ in their own way. Lisa was living and teaching in Guatemala in 2008 when a friend of a friend invited her and her roommate to try out a class, which they did on a whim. After one class, Lisa was hooked, to the point where she had found a place to train within a week of returning to her home state of Maine. She moved to DC in July 2009 and joined Fifty/50 after a brief hiatus due to injury.

Greg had been doing aikido for about a year and checked out BJJ after one of his aikido instructors (who also did BJJ) and some of his college friends in Richmond, VA, showed him some moves and told him he’d be a natural. He found Fifty/50 in late 2009, and he found Lisa shortly thereafter.

Interestingly, he wasn’t even training BJJ when he and Lisa met, focusing instead on the muay Thai classes Fifty/50 offered. Their first encounter occurred during an event called Survive DC, which is basically a giant game of tag around the District of Columbia. Lisa had sent a message to the Fifty/50 mailing list asking if anyone wanted to participate. Greg, having just ended a 5-year relationship, jumped at the chance to get out and about.

While they didn’t actually get to spend much time together during the race, Greg had already decided that Lisa was “hot,” so he spent the next three weeks texting her. When she figured out he had designs on her, she said “NO! Not that guy!” But Greg persevered.

But what really got Lisa was one day when Greg said he wanted to hang out with her. She has been plagued with several injuries during her BJJ career, and this time it was her finger. She said that Greg could hang out with her if he wanted to go with her to the doctor. He readily agreed, driving her there, sitting in the waiting room for 3 hours, driving her home, and hanging out watching a movie while she lay on the couch doped up on painkillers. He never complained once.

The next day, Lisa called her mother and said she had met someone. 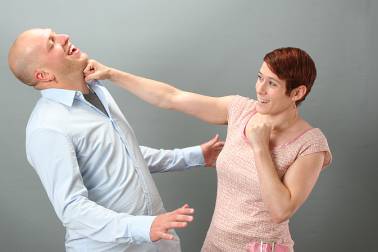 Shortly thereafter, Lisa brought Greg home to meet her family. Greg crowed that he was the first boyfriend ever to make the cut, and Lisa joked that that’s because she usually dated men who lived overseas. But then Greg said, “First is first, and last is better!”

They were fairly discreet with the Fifty/50 folks for about the first 3 months of their relationship, until they figured out that it was serious. And then they brought Fifty/50 in with a vengeance, with Greg deciding to propose to Lisa at a belt promotion ceremony.

He found a ring Lisa liked (throwing her off the trail by showing her various things he was looking at online), and as soon as she said she liked it, he bought it, keeping it in his car so she wouldn’t find it. After getting the okay from Ryan Hall (the main instructor at Fifty/50) to propose at the upcoming belt promotion ceremony, he taped the ring to his wrist and trained with it until he got too sweaty, at which point he had to put it on his little finger and roll with his hand kind of balled up so he wouldn’t lose it.

After the promotions were over and everyone was lined up in preparation for bowing out, Ryan called Greg up to the front of the room. Nobody knew what was going on, least of all Lisa, who vaguely wondered if Greg was going to show some aikido moves or something. But when Greg pulled out the ring, Lisa clued in, and since she was the one filming the ceremony, the “Oh sh*t!” she uttered is clearly audible. When Greg saw that, he dispensed with the speech he had been planning to make and just popped the question. By this time, someone had taken over the filming from Lisa, so you can see the proposal, her response, his reaction, and the celebration of the entire academy. You can also see that Greg was wearing his Lord of the Rings T-shirt, which was obviously appropriate for the occasion.

Greg and Lisa still find that BJJ plays an important role in their lives. Lisa even runs a grappling t-shirt company. They like to roll together, though they don’t really do it very often in the academy because of the size difference between them. But Lisa is more comfortable rolling with Greg than with anyone else; she knows there’s no question about his motivation. Greg agrees. They get each other, and when Greg rolls with Lisa, he can hone his technique. 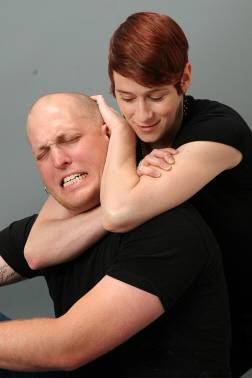 That being said, now that they have found each other, sometimes it’s harder for them to motivate to train, given that the alternative is for them to spend time together at home with their dog. Sometimes that wins out, especially because Lisa’s schedule as a newly minted firefighter in Alexandria, VA, makes for some unusual hours. Greg’s job as a patent examiner enables him to work from home, but he has deadlines and demands that make training a challenge sometimes as well.

Greg and Lisa have experienced many changes in their lives recently: new relationship status, planning a wedding, new job, new home, new dog. They still love BJJ, but maybe for now until things die down they will focus more on loving each other instead.