Exercising to achieve greater power is necessary for virtually every sport. Unfortunately, the ideal way to achieve peak power is a nuanced endeavor. In a recent study in the Journal of Strength and Conditioning Research, learning how to develop peak power was the goal.

The participants were 27 men with an average of over six years experience in squats and bench presses. They each performed the squat and bench press with various loads, sometimes using a counter-movement and sometimes just using the concentric phase of each exercise, while the researchers measured their power outputs.

Interestingly, and perhaps surprisingly, the max power outputs occurred at different weights, but were roughly the same. So while more weight was needed for the concentric-only lifts to achieve maximal power, the maximum level of power reached was the same as it was with the counter-movement. 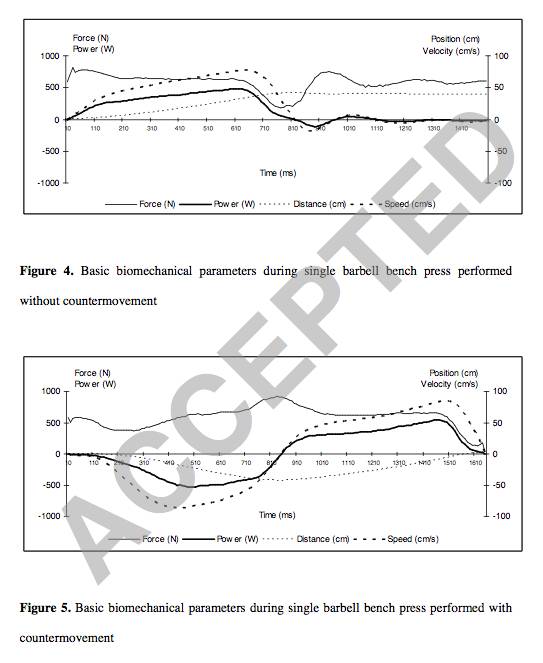 The Role of the Stretch Shortening Cycle

The lower weight required to reach maximum power with the counter-movement is perhaps a result of the limit in the elastic loading effect of the stretch shortening cycle (SSC). The SSC help the body makes muscle action more efficient. As a muscle elongates, it stores up energy that it can then use to generate more power when it’s time to act. This is why you can jump higher if you drop quickly first, or punch harder if you draw your hand back first.

The SSC has been shown to have load limits. The researchers noted that as weight increases, the motion is slowed and energy storage is reduced. This suggests that if power production is the most important aspect of training, as it would be for many sports, the lighter weights used in this study may be optimal.

Some further points might be useful for lifters, however. Heavier loads, while not optimal for peak power development, might still be good for maximal strength development. When using a load corresponding to eighty percent of maximal force, it took the lifters four times longer to reach peak power output during a single lift. This delay was due to the effects of SSC. SSC typically enhances power at the start of the move, but if your sticking point is mid-lift, a heavier load with a counter-movement might be just what the strength and conditioning coach ordered.

Not only was the effect delayed during the lift, but heavier loads also prolonged the effect of the SSC. This means that the effect wasn’t as sharp, but it lasted longer throughout the lift. Once again, a heavier load may be beneficial for developing power later in a lift.

Peak power was similar even without the counter-movement, and concentric-only lifts were shown to be easier to recover from than lifts that included eccentric components. These results suggests concentric-only power development could be a promising method for the future.