Promoting wellness, while preventing burnout, is one of the overriding passions in Roxy’s life and something she seeks to provide for others, both competitive fighters and everyday people. I had the opportunity to talk with Roxy about changes in the sport of muay Thai and fitness worlds for men and women alike, and how these have related to her own development over time as both an athlete and a coach.

Roxy spends between three and five hours a day teaching classes or working individually with clients. She also coaches fight team training for two hours. As for the rest of the day? “The rest is me stuck to my laptop absorbed in emails, marketing and office work. Somewhere in there I still manage to do two to three weight lifting sessions and two muay Thai sessions per week to keep me fresh,” she said. Roxy loves what she does and doesn’t perceive it as work. For this reason, she makes sure to maintain a strict routine to prevent burnout, to keep her from working all day, every day. “I almost never take my lap top home and I read non-fitness and health related books on my Kindle at home after dinner.”

Roxy’s typical day is very different now compared to when she was active on the competition scene:

Then my top priority was myself and my training; now it’s my business. My students, clients, and fighters come first, and I put myself second. I joke around that my students probably work out more than I do at this point, but I can still spar for an hour straight so I don’t think I’m doing too bad.

Roxy discovered muay Thai in 2002. According to her, she was slacking off and bartending in Philly after college when she met a guy who trained, and she liked it instantly. She noted, “The intensity and focus it required made it a good outlet.” 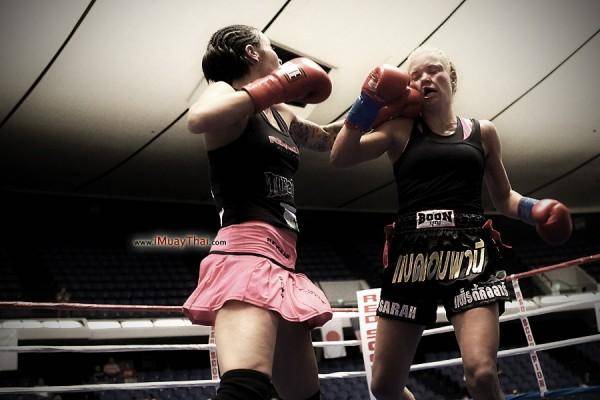 After moving to LA a few months later to change things up a little, she found a muay Thai gym to help herself stay busy, given that she didn’t immediately have a job and knew only a couple people there. She started training regularly. “Maybe compulsively would be a better adjective,” she added. And less than six months later, Roxy had her first fight.

After three years, Roxy was the veteran of several fights. She was training constantly, but she made the surprising (to her) decision to make muay Thai her life. “It just felt like the right decision,” she said. She started learning to teach from Chris Reilly, who was already her coach. Roxy shared:

Muay Thai wasn’t really popular back then. There were few girls involved in the sport and I wanted to be taken seriously as a trainer, so I decided to get my personal training certification as well. I like learning about exercise and was always looking for the best way to get fit and conditioned for fights. Along the way I’ve found I’m really passionate about nutrition, Olympic lifting, and kettlebell training.

That being said, Roxy has noticed a definite increase in the popularity of muay Thai in the past decade:

Most people have at least heard the name now and don’t just think it’s a tropical drink. I was happy when I could finally say, “I’m a muay Thai fighter,” and people knew what that was, instead of having to explain that it was like kickboxing, but different.

Ironically it is the growing popularity of mixed martial arts (MMA) that has both helped and hindered the sport of muay Thai. Roxy also commented about the influence of MMA:

It may have given it a bit of exposure, but we lost a lot of muay Thai fighters to the sport of MMA in pursuit of bigger purses and more fame. I don’t blame those fighters. Everyone needs to earn a living and being a muay Thai fighter in the U.S. does not pay the bills. It’s a less than minimum wage job, and you’ll probably never make back all the money spent on training, time away from work, supplements, gear, etc. that you pay over many years as an amateur just to go pro.

Roxy commented that she respects anyone who pursues a career in muay Thai, because she knows they are not doing it for financial gain. Rather, they must truly love it.

Another indicator that muay Thai is growing as a sport is there are now several promoters in the Los Angeles area, where there used to be just one when Roxy was competing. She noted that the sport still has room to grow, but the options for fighters are improving and the shows are becoming more sophisticated. “We need to see more shows like the ones that Lionfight Promotions is putting on in Vegas. Those guys really know what they are doing,” she said.

Roxy would like to see specific things happen to help muay Thai grow as a sport the way MMA has. Roxy gave her opinion on what the sport needs:

….more modern production in the US with big money behind it, but in order for that to happen the sport must be adaptable to becoming more marketable to American fans. Right now there seems to be a battle between some of the more traditional muay Thai teams, coaches, and fans who don’t want any modernization of the sport and the more progressive teams and fans who are adapting to changes that will naturally take the sport further.

Roxy’s not advocating that muay Thai be marketed just like MMA, only that it get more exposure and experience financial growth. “It will be interesting to see how it all plays out in the next few years. I’m making it my mission to give my fighters many more opportunities than I had,” Roxy said.

It sounds like Roxy has somewhat of an uphill battle for her fighters in this regard, especially as it relates to her female muay Thai fighters. “I’d like to think that there are more opportunities and opponents for women in muay Thai, but I don’t know if they are,” Roxy said. She further explained:

Many of the women who start out training in muay Thai go to MMA so they can have a lucrative career with more fights: Gina Carano and Kaitlyn Young just to name a couple. I can count the number of active pro female muay Thai fighters in the U.S.A. that only compete in muay Thai on my fingers – and that includes ALL weight classes. Maybe the level of skill has gone up a bit, but the number of opponents hasn’t much. We have a lot of catching up to do to get to where Canada and Europe are with their level of female muay Thai. Lack of fights was one of the reasons I retired. Hopefully I can help change this for my girls in the coming years.

To learn more about Roxy, read part two of our interview: