This month’s article deals with creating a foundation of strength, preparing the body for more intense strength and power training later.

Readers hopefully engaged last month in a decent two-to four-week transitional phase and are now ready to step up their off-bike resistance training a notch. If you have not performed some transitional work, please implement last month’s training advice prior to working on this installment.

Readers hopefully engaged last month in a decent two-to four-week transitional phase and are now ready to step up their off-bike resistance training a notch. If you have not performed some transitional work, please implement last month’s training advice prior to working on this installment.

Having done some simple break-in work, whether with external loads or simply bodyweight, cyclists have prepared all major muscle groups. But, the transitional loads are too light and the reps too high to really improve one’s strength in a noticeable way.

Keep in mind there are several types of strength. Cycling does not call for maximum muscular strength. But max strength is the measure by which we will establish the entire year’s weight training program. Maximum strength is your ability to successfully move a load through a full range of motion once; a second effort (rep) would result in failure.

Don’t worry, there’s no need for endurance cyclists to even come close to testing their maximum strength. Max strength is something serious strength and power athletes, including some track cycling disciplines, must consider. But, training the muscular system for an all-out (max strength) effort takes time and focus. Roadies just don’t need to go there.

However, it is crucial to improve a rider’s strength during this off-season. Increased strength, which does not mean creating larger muscles, is necessary in order to improve your power, or speed-strength. This characteristic does have specific application to cycling. However, all these traits come later in the periodized plan, after we’ve built a solid foundation.

This month’s article deals with creating this foundation. Road riders should engage in this training for at least four weeks, and eight is generally better. These two months can, and should, include different exercises focused on properly preparing the body’s muscular system for the more intense strength and power training that comes after the first of the year.

This month we again look at five areas for emphasis: upper body pushing, upper body pulling, abdominal, lower back, and lower body, all done in multiple-joint, mostly ground-based, free weight movements. In classic periodization models this phase of training is often referred to as hypertrophy or increased muscle cell growth. I’ll use instead the term foundation for two reasons. First, proper scientific jargon, while often appealing, can make things sound too complicated, especially for non-strength/power athletes, and second, the one thing most cyclists do not want to do is add muscular bulk to their bodies. 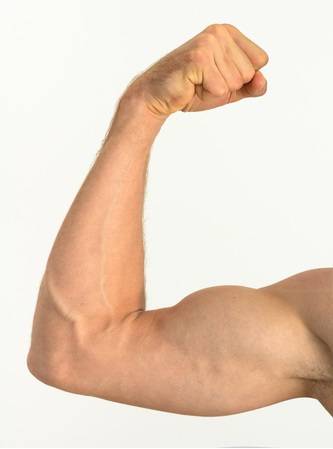 But yes, this period’s goal is to build some muscle. This growth takes place at the cellular level. It’s extremely unlikely that any cyclist will balloon up to threaten local bodybuilders for a physique competition title. It’s just can’t happen physiologically, period. Although the recommended eight to twelve reps during this phase is similar to that utilized by most bodybuilders, an ectomorph cyclist has nothing to fear.

Remember though, this is the off-season and riders generally reduce their high volume endurance work on the bike or elsewhere. And true, trends show that most of us gain weight during this holiday season. So, it is possible a cyclist engaged in three-day-a-week resistance training and not riding as much as usual could gain a few pounds in November and December. This is not a result of lifting, but of greater calories in than calories out. No worries, a few additional pounds get used as fuel once the regular riding season starts back up.

Again, there’s no magic list of cycling-specific weight exercises to use. You should engage in standard, mostly ground-based, multiple-joint, full range of motion exercises. Include upper body pushing and pulling, along with lower body, and something for the lower back or abdominals will suffice.

Five exercises, three or four sets, all at eight to twelve repetitions are all that’s needed. It’s not necessary to do the same exercises each workout, but do train the same muscle groups. For example, a rider might squat on Monday, lunge on Wednesday, and perform step-ups on Friday. All of these work the lower body musculature via hip and knee extension.

It really makes no sense to build an extensive workout that duplicates effort through similar exercises. While a bodybuilder might include bench press, incline press, decline press, and parallel bar dips in an effort to grow the deltoids, triceps, and pectorals, a rider simply needs to use one exercise to gain the needed muscular strength for riding.

Within the three or four set structure it’s a good idea to start with something relatively light, about 50 to 60% of your best and do twelve reps. It’s not necessary to know or calculate a true 1RM (1 repetition maximum) figure. Simply estimate a 100% figure, using either a rate of perceived exertion scale or by multiplying a 10RM by 130%, which provides a ballpark figure for a 1RM. Then base intensity figures as a percentage of this hypothetical number.

After the first set, take a ninety second to two minute minute rest (get a drink, record the last set, etc.), go up in weight slightly, and perform maybe ten reps on the second set. After this, rest again, then increase the weight and finish off with a set or two of eight reps. 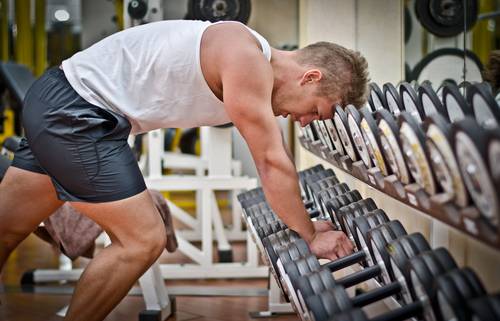 A tough part of this type of workout is getting the endurance athlete to recover between sets. This break between sets is necessary, however, in order to allow the body’s ATP-PC energy system to be ready for the next (more intense) set. It’s a mistake to treat foundation work as a circuit, rushing out of breath between one exercise and the next. It’s equally inappropriate to perform set after set with only thirty or so seconds between efforts. Foundation weight work is not supposed to be a cardio-respiratory form of exercise. It’s designed to be anaerobic, with nearly complete recovery between sets.

I strongly suggest riders keep a training log or diary. Most riders do so for their two-wheeled activity, but recording off-bike workouts in reasonable detail helps greatly in terms of long-term progress. I encourage riders to create a personal record chart within the diary in order to systematically record and improve performance during the off-season.

List the key exercises involved in the training program and record your best performance for twelve-, ten-, and eight-rep maxes. Leave room for a 6RM, as well, but this is not attempted during foundation training. Make it a point to steadily improve some of these personal records once every two weeks or so, but be certain that perfect exercise technique remains a priority. Don’t push personal records by attempting too much weight or by modifying technique (cheating). Not only does this provide a false sense of accomplishment, but it also greatly increases the risk of injury. There’s no reason for a cyclist to get injured in the weightroom.

In case you missed it