Ozeri is a company that specializes in “digital lifestyle products.” What this means is they make everything from bathroom scales, to kitchen scales, to pedometers, to blood pressure monitors, to cordless electric wine openers with infrared thermometers so your wine is served at the appropriate temperature. As fascinating as that last one sounds, it was the bathroom scale that I chose to review for the Breaking Muscle audience.

I have been using what turns out to be a completely indestructible Tanita scale for a lot of years now. And by a lot of years I mean it’s been with me since 2004 and has made it through moves to at least seven different households during that time. I originally bought it because I wanted a scale that gave me an idea of my body fat percentage. And in 2004, I had just joined Curves and wanted to lose some body fat. This is how old this scale is, people.

Needless to say, technology has come a long way since 2004 (and thankfully so has the average gym, though I do still see a Curves in existence on occasion). So when the opportunity arose to check out the Ozeri Touch Digital Bath Scale, it seemed like a good idea.

One thing I like about this Ozeri scale as compared to my old Tanita is that the Tanita took multiple taps with my toes on the buttons to be ready to weigh, and that’s even if you didn’t want to change which user profile it was referencing. The Tanita also beeped when you did this. Coordinating my toes first thing in the morning and trying not to wake up my husband both proved challenging with the Tanita. With the Ozeri, all you have to do is stand on it, and because of the pretty blue LED numbers, you don’t even have to turn on the room lights. 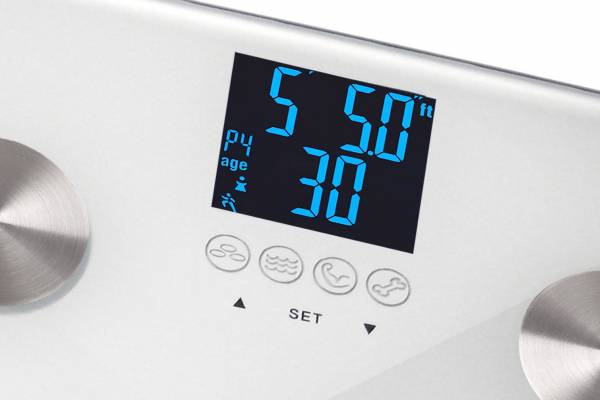 And, even better, the Ozeri knows who you are. Well, as long as there’s not more than one of you who are shaped super similarly in your household, it knows who you are. The scale is able to create and store up to eight user profiles consisting of the user’s weight, gender, height, and age. Based on what it reads when you step on the scale and what it has recorded, it figures out who you are. So, like I said, as long as you don’t have some sort of near-doppelganger in your house, it’s all good.

Once you step on the scale, it quickly measures your weight and calculates your:

Notice I said it “calculates” those things, not “measures.” The scale uses bioelectrical impedance analysis to arrive at the numbers it gives you. Basically, the different tissues in your body conduct electricity differently, and based on a pulse the scale sends through your body (which, of course, you don’t feel) it figures out what you’re made of.

The scale can calculate weights up to 440lbs (200kg), in 0.2lb (0.1kg) increments. (If you’ve ever wondered why your scale measures in 0.2lb increments, you can blame it on the metric system.) The scale runs on two Lithium batteries that are included with purchase. The readout is the aforementioned bright, but pleasant blue LED.

I really like how thin and compact the scale is. My Tanita was a chunk. This one is much thinner and sleeker. Due to its sleek design and the fact it’s mainly made of high-tempered glass, it’s also easier to clean. And along those lines, according to the Ozeri website their scales are manufactured with “Microban antimicrobial technology,” which aids in keeping them safe and clean.

Things to Know About the Ozeri and Digital Scales in General

Another thing to know is that digital scales give you the best results when you use them at a consistent time each day. I measure myself first thing in the morning. If you weigh at all different times of day, you might see huge and inexplicable variances in the hydration, muscle, and bone measurements, as well as your body weight. This is true of any brand of scale that measures by bioelectrical impedance analysis and is due to your hydration levels changing over the course of the day. So, keep it simple and pick one time each day to weigh yourself, and know that if you have a wacky measurement day it may be more related to your hydration level than last night’s steak and whiskey.

Lastly, be mindful of the surface you set your scale on. I’ve seen people complain about the inaccuracies of their scales before, only to discover they’ve put them on carpet or that their bathroom isn’t actually level. Like with the time of day, for best results keep your scale on same flat, hard surface at all times.

All in all, as long as you take the strengths and limitations of bioelectrical impedance analysis into consideration, the Ozeri is a great option for a digital bath scale. It’s sturdy, aesthetically pleasing, and easy to use. When I first bought my Tanita years ago, I paid over twice as much for it. So at its price point, the Ozeri is a great deal and could give you some useful insights into your health and fitness.

Ozeri Touch Digital Bath Scale is available for $39.95 at Amazon.com.