This is one of the coolest products I’ve ever tried. I love the feeling of breathing against resistance, and even more I love the idea that it’s like a barbell for my lung muscles.

Elevation training has been a topic of considerable controversy lately. It seems that science is moving away from the concept as an effective means of developing aerobic capacity. In theory, elevation training would increase your red blood cell count, but you may have heard the counter arguments by now. It only works if you sleep in high altitude, it’s only effective if you are competing at altitude, and so on.

These sorts of arguments might dissuade you from purchasing a product called an “elevation mask.” While the Training Mask 2.0 is marketed as a simulation of elevation, and in some ways it is, what the mask actually does is force you to breath against resistance. So rather than somehow thinning the oxygen level of the air you’re breathing, it simply takes greater effort to breath. It’s as if you’re getting a lung workout in a way that you don’t usually get. 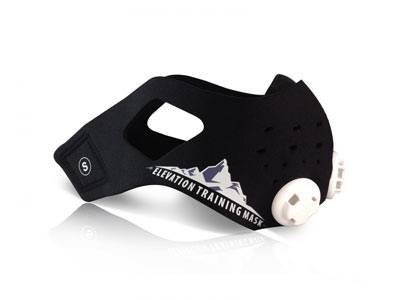 And I have to say, I enjoy it. It’s a funny feeling that may cause a little panic at first, but once you get past the sensation of needing to breath against resistance, it makes for a workout that will leave you gasping, but in a good way. Oh, and that’s just on the first level. There are multiple levels.

In addition to enjoying it, I like the principle behind it more than elevation training anyway. The diaphragm, which controls your breathing, is a muscle after all. Training the diaphragm is a long-standing tradition in some of the coolest of physical cultures and, really, I’ve never found a better way to accomplish it.

There are a few bonus side effects I’ve noticed as well. First, I live in the North, and running in the winter can be a pain, in part, because of breathing the cold weather. The Training Mask created a nice warm chamber, completely enclosing my nose and mouth. That had a mild warming effect that was great. I also noticed an mild boosting effect on my heart rate during extended warm up that may have given me enhanced cardiac benefit.

On the flip side of the coin, there were a few issues. I do wear glasses, and the mask didn’t work so well with them. Also, I have a giant head, and while I have the appropriate size according to the Training Mask sizing chart, I think it’s a tad too small for me. It is still comfortable, but I worry about the long-term structure where the Velcro attaches because of how much it stretches to put it on. So, when choosing a size, keep the circumference of your dome in mind.

If you exercise in public, you also need to be honest with yourself about whether you will actually wear this thing. Running down the street, it sort of looks like you have a black Hannibal Lecter mask on. That’s not for everyone.

Now, I don’t think there’s much in the way of research one way or the other on breathing against resistance as a regular part of your training, but to me it makes good sense. However, I haven’t progressed far enough up the levels of resistance to be able to say it’s made a huge impact on my training. As I continue to use it, I will post my results here on this page.

I have to say that despite what might seem like a laundry list of gripes, this is one of the coolest products I’ve tried. I love the feeling of breathing against resistance, and even more I love the idea that it’s like a barbell for my lung muscles. It has become a regular part of my routine, and if that part of physical culture entices you, then I’d recommend it for you as well.