Many people do not automatically think of the word athlete when they think of race car drivers. Motor sports are a sport like any other, however, and not only are race car drivers true athletes, but so are the members of the pit crew.Pit crew athletes are exposed to extreme physical and psychological stress in the course of their competition. Recently the Department of Kinesiology at the University of North Carolina decided to conduct a study on the heart rate and core temperature of pit crews during a race, due to the complete lack of studies previously done on pit crew athletes.

According to the study published in the Journal of Strength & Conditioning Research pit crews experience temperatures ranging from 56 to 102 degrees Fahrenheit for anywhere from 3 to 6 hours at a time. NASCAR and other racing organizations also require pit crews to wear fire retardant safety suits for the entirety of the race. In addition to the physical stress, there is the performance anxiety athletes experience during the competition. An elite pit crew can change all four tires and refuel a vehicle in 12.5-15.0 seconds and the outcome of the race can be dependent on their ability to do so.

In this study, in order to record their core temperatures, selected pit crew athletes swallowed CoreTemp Wireless Ingestible Temperature Sensors. Heart rate was measured by Polar HR monitors. During the racing event, measurements were taken every 15 minutes and approximately 1 minute after each pit stop. 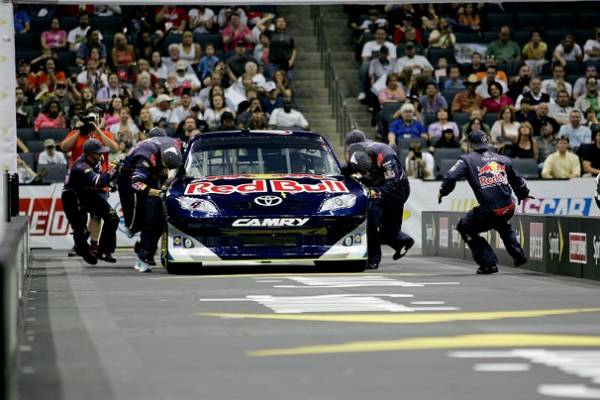 The results of the study show pit crew athletes have developed a physiological adaption to the heat of their environment. Control subjects not on the pit crew, but attending the race, displayed higher core temperatures than the pit crew athletes. Heart rates, however, were significantly higher in the pit crews and this may have been directly related to their circulatory system working hard to keep their core temperature low. The highest heart rate amongst the crew was recorded in the athlete in the “changer” position, who is given the weighty responsibility of securing lug nuts on the tires. It was reasoned in the study the elevated heart rate was due in some part to the psychological stress of this position. The second most stressful position is considered to be the “jackman,” who operates the hydraulic jack which lifts the car and who also displayed an above average measurement in regards to elevated heart rate.

In conclusion the study hypothesized athletes who have demonstrated a physical adaptation to their extreme environment would best be able to continue to increase their performance by seeking out a sports psychologist to ameliorate the psychological stresses related to the competition.