If you already get a lot of protein in your diet, a new study suggests you can keep your protein powder money in your piggy bank, because you probably don’t need any more.

Protein powder is probably the most common supplement for athletes, along with perhaps a multivitamin. As a result, the protein supplement industry has grown dramatically in the last few decades, and now the variety of brands and types of protein you can get are overwhelming. It’s generally accepted that protein supplements work, and there’s science to back that up, but what’s not well understood is their effectiveness when combined with an otherwise normal diet over the long term.

A large study this month in the Journal of Strength and Conditioning Research examined the effectiveness of protein supplement use in people who get adequate amounts in their diet. You might be surprised that the effectiveness of protein supplementation is even in question, but believe it or not, it still is. Although we know the protein in supplements is absorbed and used by the body, we don’t know whether timing, absorption rates, speed of absorption, type of protein consumed, and other variables really matter over time if you’re already getting enough dietary protein.

“Over time” is a key point here. This study looks at protein supplementation over an eight-week period, whereas most of the previous literature looks at protein utilization after one meal or one workout. There are more variables too, which can confuse the issue even more. Trained people respond differently than untrained people, athletes have varying diets, and everyone exercises in different ways.

To address these issues, this study took over a hundred people of various exercise backgrounds and had them complete an eight-week program focusing on the bench press and leg press. All of the participants worked out three days per week. Some of them did a low volume program (only three sets of about six reps at most of each exercise) and others did a higher volume program (five sets of about six reps at most).

Studies like this are so exciting because they give the average person useful information, thanks to the sheer size of the study and a how thorough it is. The researchers measured strength, endurance, and muscle size and also took blood. They had virtually every base covered.

And now for the results. Drum roll, please. Make sure you’re sitting for this one. There was no major difference between any of the groups. All of the participants got stronger, all of them got bigger, and the blood work was mostly the same, as you can see in this chart: 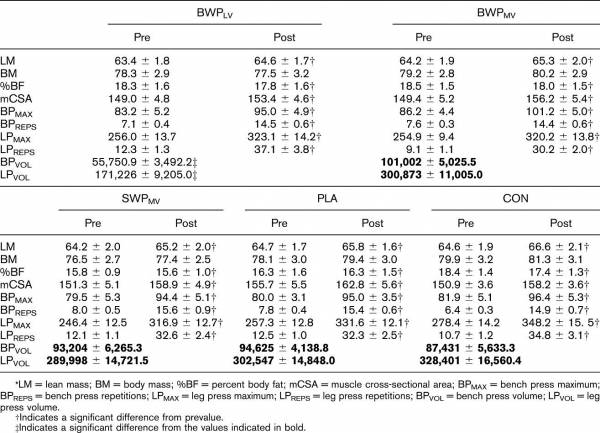 The average amount of dietary protein the participants were getting was between 100g and 120g daily, with the vast majority on the low end of those numbers. Apparently this amount was adequate. The researchers confirmed that the protein supplement groups were averaging upwards of 140g – 150g of protein daily, but didn’t get better results after eight weeks.

A few variables may have impacted these results. For example, some of the results could be explained by beginner’s gains. I’d love to see the same study but with a better trained group and increased training volume. I still wonder if increased protein consumption may yield better results when the volume is pushed to the edge of overtraining. But until we get that information, it’s safe to say we can save a little money on protein supplements as long as we get at least 100g of protein in our diets each day.