In MMA and boxing, padded gloves and headgear are designed to lessen the forces encountered, primarily those resulting from linear acceleration, but what about other types of impact forces?

Concussions. Cervical spine injuries. Head trauma. These are serious issues in contact and combative sports today. If you don’t think so, take a look at the concern in the NFL. Athletes today are faster and quicker. Protective equipment has become lighter. Do the physics math: greater forces are being exerted from one athlete to another, and these forces must be absorbed somewhere. Unfortunately, the head and neck are the target of these forces, especially in mixed martial arts and boxing.

In mixed martial arts (MMA) and boxing, padded gloves and headgear are designed to lessen the forces encountered, primarily those resulting from linear acceleration, but what about other types of impact forces?

Knowing this, researchers in Ohio (Cleveland Clinic, Case Western Reserve University, and SEA Ltd) and West Virginia (United Hospital Center Neurosurgery & Spine Center) simulated head and neck injuries sustained during hook punches and tested whether head and hand padding lessened these risks. They found padding lowered the linear, but not the rotational impact forces, and it did not eliminate the risk of brain strain injury.

Dr. Adam Bartsch and his colleagues used a Hybrid III anthropomorphic test device (ATD) (a crash test dummy) that represented a man in the fiftieth percentile to evaluate linear, rotational, and combined linear-rotational impact forces. A pendulum was used to deliver fifty-four blows to the left side of the ATD “head,” replicating a right-handed hook punch at low force and high force. The “head” was tested uncovered or covered with padded boxing headgear. The pendulum was also tested uncovered or covered by a padded boxing or MMA glove.

Each impact condition was examined six times at both low and high force levels, except the one involving the boxing headgear and boxing glove, which was only tested at the high force level. Impact force data was quantified according to seventeen dynamic head and neck injury risk parameters (such as head acceleration, impact duration, angular acceleration, and kinetic energy transfer), which were separated into linear, rotational, and combined linear-rotational groups.

Bartsch and his crew also used a Simulated Injury Monitor (SIMon) finite element brain model, a software program that takes into account various parts of the brain and how they theoretically respond during injury. The SIMon model provided information on brain compression, stretching, and pressure. Data obtained from the ATD experiment –particularly linear acceleration and angular velocity – were entered into the SIMon model. This offered an assessment of the risks of various brain injuries such as acute subdural hematoma and diffuse axonal injury. 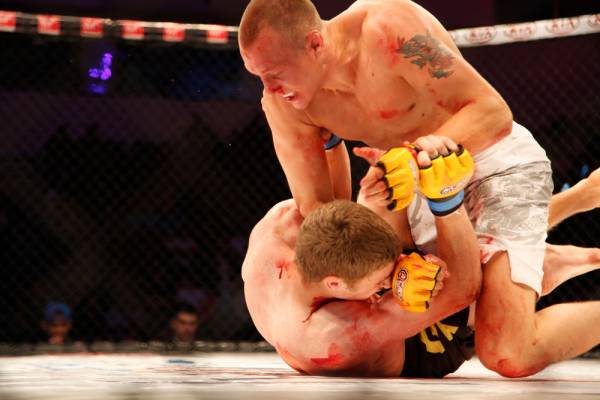 They discovered that all impact conditions involving padding reduced linear, but not rotational impact forces delivered by the “hook punch.” Not surprisingly, the best overall reduction in impact force was found when boxing glove and headgear were both used. They also determined there was an increased theoretical risk of brain strain injury associated with both boxing and mixed martial arts regardless of what padding was used. This finding surprised them because the theoretical risk persevered even under conditions in which padding significantly reduced impact dosage.

The authors concluded their results are just preliminary, but point out how critical it is to develop improved protective padding that will lower both linear and rotational impact dosage during these combat sports. They also indicate the need to develop new standards for measuring head and neck injury risk that take into account rotational and combined linear-rotational parameters.

As athletes keep getting stronger, leaner, faster, and quicker, their ability to generate force increases. In combat sports such as MMA and boxing – where there is an inherent risk to begin with – it is important we continue to not only develop more effective protective equipment, but also head and neck strengthening protocols.