How much recovery do athletes need, and how do we figure that out? A new study has some answers.

As a coach it can be difficult to assess the recovery needs of athletes, especially for an entire team. A recent BMC Sports Science, Medicine and Rehabilitation study looked at accessible methods for determining recovery needs in rugby players. 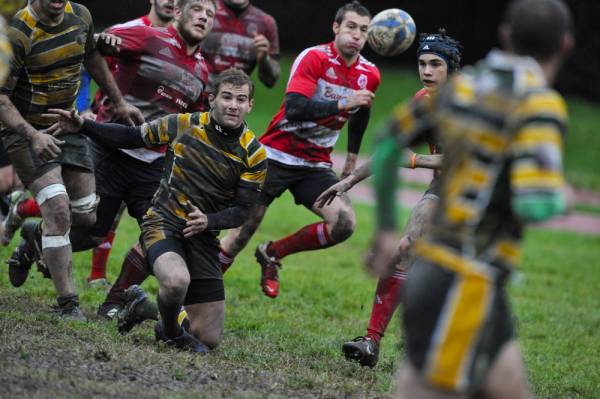 28 rugby players participated in the study, although the results can be applied to other team sports. The researchers took blood samples two hours before, sixteen hours after, and forty hours after four European Cup games. They were looking for creatine kinase in the blood, which is a marker of muscle damage. During each game the researchers also measured the number and type of impacts each player had and tracked the speed of their movement. The velocity measures were taken by a GPS unit.

RELATED: Train Like a Rugby Pro – In Less Time and With Less Violence

All of the studied characteristics indicated the need to recover, but the correlation between speed as measured by the GPS and muscle damage was demonstrated here for the first time.

It probably isn’t surprising that running speed correlates to muscle damage, since we know sprinting is a good workout. The question is, do rugby players (and perhaps players in sports with similar physical demands, like American football) run long and fast enough to have elevated recovery needs due to muscle damage?

“Even after forty hours, creatine kinase levels still had a moderate correlation to high speed running and sprinting.”

For the rugby players in this study, the answer was a resounding “yes.”  Even after forty hours, creatine kinase levels still had a moderate correlation to high-speed running and sprinting in players in the back position (the players responsible for defending the back portion of the field). Forwards (who play in a more offensive role), on the other hand, demonstrated smaller correlations between muscle damage and running, with more of the damage coming from contact with other players.

It is interesting to think of the impacts players receive during a game as similar to the damage that takes place during exercise. When an impact occurs, the primary markers scientists use to gauge muscle damage increase, just as if an intense workout had occurred. This study suggested the impacts the players receive during a game require even more recovery than the exercise itself.

The researchers presented two ways an average team can determine the degree of recovery required by each player. Using GPS to determine speed, distance run, and the time spent playing can assist many teams where subjective measures of perceived exertion provide too little accuracy. Determining the number and degree of impacts is another simple way to assess recovery needs. The researchers concluded:

These data increase the understanding of the causes of muscle damage in rugby union; performance markers could potentially be used to tailor individual recovery strategies and subsequent training following rugby union competition.

Since both methods provide substantial information about each athlete’s recovery needs, these tools can be put into place to determine when an athlete needs to take it easy in the next game, or when they might need to sit it out sit it out.