So You Want to Write Your Own Program

If you’ve decided to build your own training plan from the ground up, here’s how to get started.

Many trainees do not understand how to set up a training program themselves, so they follow any plan that comes along, bouncing from one idea to the next. Or they train however their friend is training, who is just as clueless.

Part of the problem of designing a program for yourself is, well, yourself. As Dan John says, “the coach who trains himself has an idiot for a client.” It’s difficult to look at ourselves honestly and see exactly what we need to do to make improvements. It’s too easy to gloss over our weaknesses and focus only on our strengths.

But let’s say you’re going to design your own program anyway. I’m here to help you get your ducks in a row. Let’s take a look at this programming monster.

What Is a Program?

A program is nothing more than a map or a timetable. It is an arrangement of instructions to be followed in a particular order leading progressively to a specific result. It’s a form of optimizing, an act or process of making something as functional and effective as possible.

There. We have arrived at step one.

If you’ve decided to go it alone with your programming, take a studious approach. [Photo courtesy Jorge Huerta Photography]

Step One: Identify Your Goals

Often people have more than just one goal. Once you have your goals listed, start looking at which ones may be impossible to achieve at the same time. Sometimes two goals can be conflicting: looking like Arnold, but at the same time performing like a Navy SEAL. That only happens in the movies. You will not be able to train for and run a marathon competitively while also preparing for the next Olympic weightlifting competition.

Your job is to determine what your most desired goal or goals are. Be realistic. Take a hard look at where you’re at right now. Take into account your age, health and injuries. If you are 50 years of age, 60lb overweight, and have bad shoulders it makes no sense to train like a gymnast on the rings. If that was your goal, it would be smart to re-evaluate your goals and pick some new ones more in line with who you are. Dreams do not always become reality.

Step Two: Do Some Research

Now it’s time for a bit of research. As some people say, follow those who have already been there. Look at what other people have done to achieve the same goal you have. Read, study, and figure out what they did to reach that goal. Take a look at five or six different individuals and make notes on how they achieved the goal you desire. And notice how long it took them to get there.

Highlight the similarities between the individuals’ training programs. You’ll probably find a format they follow; which days they train, which exercises they do, and the sets and reps they like to use. You will notice how they ramp up, deload, scale down, and then build up again. And if you’re smart, you’ll also take down the commonality of their eating habits and recovery habits. This is a huge missing part of the puzzle for many people.

What’s this about ramping up and deloading? Read more here:

Basically, you want to take a six-week or longer weekly snapshot of how they train and overlay it on top of the other programs. Where do they mesh, and where do they deviate? You should notice a common thread. Set up a six-week training schedule based on that common thread.

Note the parts where their programs differ. Differences in programming are often due to personality, individual response to particular movements, and individual body differences. Taking note of the differences will be useful down the road as you learn to tweak the program to best suit you as an individual.

At this point, you should have a list of your main goals, as well as a list of methods and exercises that can get you there and a tentative six-week program. Now take a hard look at what may be missing from this program.

Dan John sorts exercises into five basic human movements. You want to make sure they’re all present and accounted for in your program. Those movements are:

Learn which exercises fit into each of these categories. A few other basic movements could be included, such as lunging, rotating, walking, jumping, running, tumbling, and others. Dan lumps those into a sixth category: “Everything else.”

Compare your program to this list. Are things missing? If so, you’ll want to even things out so you can prevent muscular imbalances, which often lead to injuries. Even if you have a specific goal like winning the local small-town strongman competition, the hidden goal in your program should be to build strength, mobility, and ease of execution in all the fundamental human movement patterns.

Step Four: Is This Program for Me?

At this point you should have a fairly decent six-week program set up. Now take a step back to assess it. The examples you started with may have been actors or professional athletes. Keep in mind that these are people who have been training for years. They have tons more ability just from proper coaching and years of practice. Your ability to perform the movements is not going to immediately match theirs. They also have a whole staff of people to push and guide them. They follow eating habits that would make a Spartan wince. With all that help, they can make radical changes in six weeks. It’s all they do.

You can model your routine after what they did, but be aware it will take you longer to achieve the same goal. You just have to spread the workload out a bit more. They might train twice per day, two hours at a time and six days per week. That’s 24 hours per week and 144 hours of training in six weeks.

With a full-time job, family, and other responsibilities, you might only have 45 minutes per day, three days per week to devote to exercise. That’s 2.25 hours per week and only 13.5 hours of training in six weeks. Get the picture? At that rate, it will take you approximately 64 weeks to accumulate the same amount of training exposure that actor achieved in six weeks. 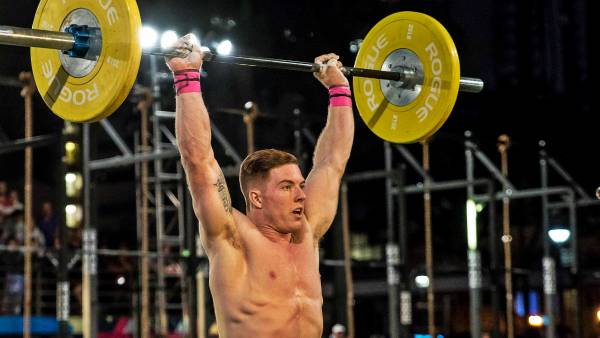 Basing your program off of a professional athlete is fine, but have realistic expectations. [Photo courtesy Jorge Huerta Photography]

Now Go Do It

Now’s the time to enact your plan. Train that way for six weeks. Record everything in a training journal. After six weeks, look back at what you accomplished by referring to your training journal. Are you closer to your goal? If not, what could you eliminate that isn’t helping? What may be missing? Does one of the exercises seem to cause you problems?

Go back and look at the programs you built your program from. How did the people who used those programs change and adapt? It may be time to tweak a few things in your program. Do not be tempted to change everything. Just change one or two things. It might be using a similar but different exercise or implement that works the same movement pattern, like subbing in double KB front squats for barbell front squats or back squats.

Test the changes out for another period of six weeks. Then re-evaluate and keep repeating the above steps. Keep accurate records. Occasionally, test yourself to see how you are doing.

Unless your goals drastically change, your original program should remain easily identifiable, even after you’ve tweaked it through the years. Once you have a program that’s working, you can use it as a template to develop other programs to target specific attributes. In time, these programs can coalesce into a training system that others can use. This long process is what will get you to your goals, keep you there, and even help you set and achieve new goals.

Or, of course, you could always just hire a coach.

Making the jump from athlete to coach? Read these first: