When I was little, I wanted to be three things: the first female professional basketball player, a writer, and Raquel Welch. When I watched Raquel in Kansas City Bombers, a movie about the then campy world of roller derby, being drop-dead gorgeous aside, what I saw was grit and sweat and glam racing around on roller skates. She was tough, man! And she was strong. She wasn’t coy about her strength either. And I wanted to be that unapologetically tough and athletic.

Soon after, I became a fan of the Los Angeles Thunderbirds, which was wildly popular in the early 1970s as part of a co-ed Roller Games league. It had a professional wrestling feel to it with many staged fights and scripted outcomes. Nonetheless, I was mesmerized by the sport. As a child, roller derby seemed to have no rules, but rules came second to Skinny Minnie Miller getting whipped around the track so she could then bob and weave through a mob of angry skaters trying to hip check her into the audience. She skated with the perfect combination of acrobatics and instinct. Looking back, I realize her ability to stay upright on skates on a banked track while dodging elbows was unbelievably athletic. Most roller derby fans from the 1970s watched the sport for the spectacle, but I was always in awe of what they were able to do physically.

As with professional wrestling, one often misses the impressive athleticism of the performers because it’s upstaged by the theatrics. Roller derby now is no longer staged, but that reputation certainly lingers. Players often get asked if roller derby now is “real.” Christina Fritz, aka Hockey Honey #7 who currently plays for the San Diego Starlettes in a flat-track league said, “There is never a set outcome in derby now, and with an extremely competitive background in hockey, I wouldn’t have it any other way.” Modern day roller derby is all about scoring points. No more choreographed fights or rehearsed stunts. These skaters are playing to score. The surviving theatrics remain only in the player’s roller derby names and the outfits. As long as the outfits don’t interfere with the much needed pads or the efficiency of their skates, that is. Fish net stockings are all fun and good, but they better not get in the way of performance. 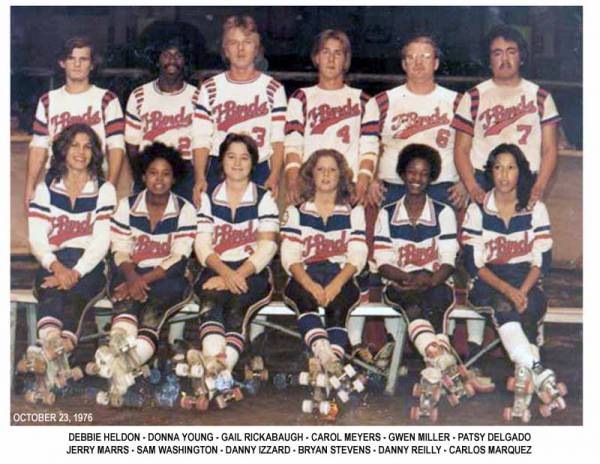 Though the L.A. Thunderbirds was the entire world of roller derby for me as a kid, it turns out that roller derby has a very long history, all rooted in the idea of mixing spectacle and athleticism. In 1935, Leo Seltzer introduced the first incarnation of roller derby to Chicago as a tracked roller marathon. Two-person teams comprised of a man and a woman would skate around a banked track against other teams for an unbelievable three thousand miles. Only one member of the team skated at a time while the other often slept in a cot in the middle of the track. The first marathon started on August 13, 1935 and on September 22, roller marathon had its first winning team. Only nine out of twenty-five teams finished all three thousand miles.

The use of women athletes in the 1930s was incredibly ground breaking especially when introducing a sport that required so much endurance and mental toughness. But this also proved to be a downfall. Despite the popularity – that first marathon drew twenty-thousand spectators – Mr. Seltzer’s vision was considered more a sideshow than a sport. What can never be taken away, however, is the fact the sport was founded on the very premise that women competitors were just as able and tough as men. 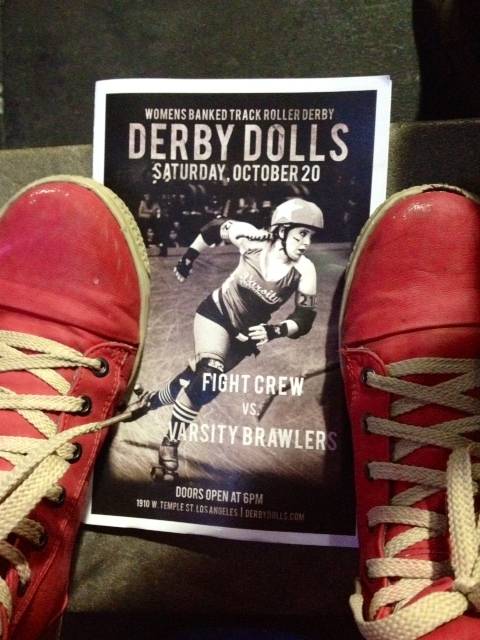 Roller derby evolved in many ways from that first marathon, but also had many fits and starts. Every decade had a resurgence and then a dying down. It was hugely popular in the 1940s and early 50s especially after Marilyn Monroe starred in The Fireball. Again in the early 1960s, roller derby made a comeback when Leo Seltzer’s son Jerry introduced a more physical game with the very popular San Francisco Bombers. Through the 1970s, as it became more theatrical, roller derby leagues had big television endorsements and a large fan base, but that all died when each league eventually went bankrupt, much to the disappointment of the fans and players.

There is a slow-burning comeback going on in roller derby now, and it has been growing for over a decade. But this comeback feels more underground and grassroots in comparison to the over-hyped promotion of earlier decades. These new and ever-growing leagues are started by players old and new whose love for the sport won’t let it die. Most leagues are all-women, but there is now a rise in men’s leagues, too. Many leagues now take on a “do it yourself” mentality where old warehouses are taken over and stands and tracks are built by a community who simply loves the game. An example is the LA Derby Dolls:

In true DIY fashion, the LA Derby Dolls’ 100′ x 60′ banked track was designed and built by our skaters, friends, and family. It is the fulfillment of a dream that required a considerable investment of time, money, and willpower. The finished product – composed of wood, steel, and Masonite, held together by thousands of nuts and bolts, and sanctified with blood, sweat and tears has become as much a part of our league as any skater.1 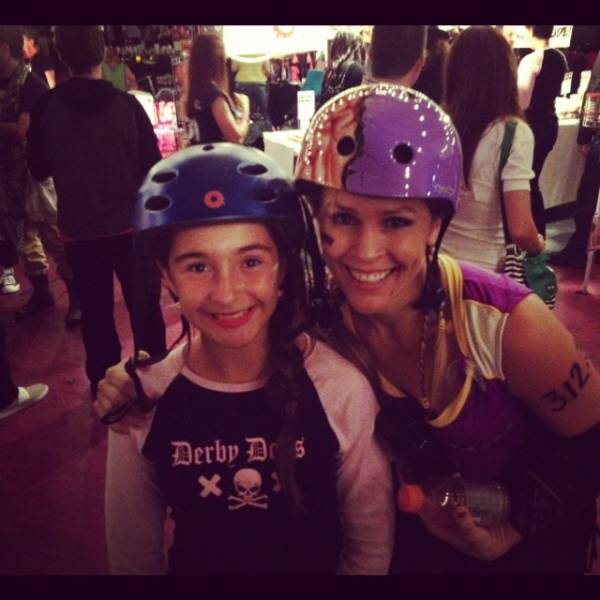 I often take my daughters to catch a game at the Doll Factory in Los Angeles to watch the teams of the LA Derby Doll league. My girls are as mesmerized as I was as a kid, and still am. And since the sport is legitimate and no longer scripted, the athleticism rises to the top. At first we point out all the great outfits, wild socks, booty shorts, make up, and hair. We laugh at all the great names like Gia de los Muertos, Tart of Darkness, or Whip N Ash. But watching them skate quickly becomes our focus. Their speed and agility, the ability to take a hit or fall and get right back into the action is so impressive that the spectacle often falls away. We’re watching warriors out there. Warriors having a great time.

At the end of the day, roller derby is still about the fans and using great athleticism to entertain. They roll right into the crowd at halftime or after a game to interact with fans. These skaters are not paid. They play for the love of the game and their biggest payment is the love from the crowd. And boy do we love them.

There are leagues in many cities now. Check your local area for games and go support roller derby. Maybe even go lace up some skates and give it a shot yourself.