Is strongman-style training better for your testosterone levels than conventional strength training? Science compared athletes and examined their levels post-workout.

I’ll start this article with a preface. I love strongman-style training. And no I don’t necessarily mean the common competitive movements; I mean the idea of it. Doing things my dad did on the farm has an appeal to me that going to a gym and moving a bar can’t match. Dragging, pulling, throwing, and doing all the other things people do every day, except with heavy weights, is a great way to train and a lot of fun.

One thing we might wonder, though, is how effective this type of training is versus our normal gym lifts. I personally think more study should be done on this, especially for hypertrophy, as I think this type of lifting might even be better than traditional gym lifts. One aspect of strongman-style training – its effects on testosterone – was recently studied in the Journal of Strength and Conditioning.

In the study researchers compared a strongman-type lifting program with a standard hypertrophy program that included basic heavy lifts. They also threw in a third option that blended the two programs. All three programs were about the same duration and intensity, and each was performed to failure and with short rest periods. To put it another way, researchers tried to make the workouts as similar as possible so that only the exercises themselves were different.

What researchers discovered in the end was that there was no significant difference between each program in eliciting a testosterone response. The traditional program with the basic compound lifts did have some of the bigger spikes, but the differences were ultimately insignificant. We might look at this, then, and think that my earlier assertion that strongman-type lifts might be better than conventional gym lifts is incorrect, but not so fast. Looking deeper into the study we see some issues that might just change your mind. 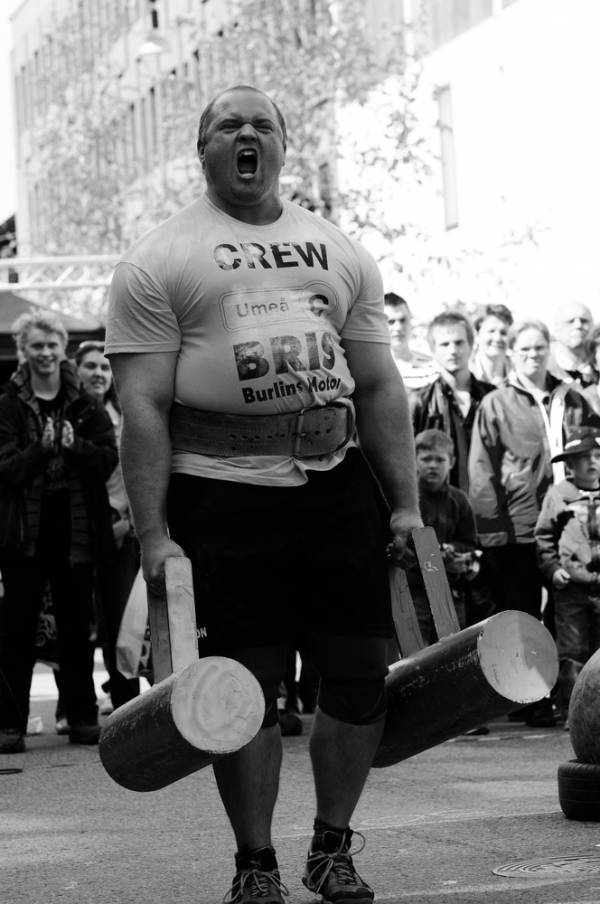 First, the athletes included in the study were all trained, selected from a local gym, and none of them had ever done the strongman lifts before. As such the researchers experienced difficulty in selecting the loads and creating a disparity between the programs. Related to this point, researchers determined the weights by using the traditional lifts.

Next, because the strongman lifts focus on concentric action, they can theoretically be performed with a higher volume. Although this study rightly attempted to control for total volume, that’s not practical in a real world situation. If the strongman lifts can be done with higher volume than studied, they may be better in the real world as a result. Also, I probably don’t have to point out the difficulty in keeping volume equivalent between a chain drag and a bench press. It’s just not possible to make a volume equivalency with exercises that are so different as those tested.

Finally, strongman lifts are more fun, at least for me. That might not sound important but it is. Remember, motivation is the most accurate predictor of success in anything you do, lifting included. If you have more fun doing one of these protocols, that’s the one you’ll get the best results in if all else were equal.

In the end, strongman-type training might be just as good as a traditional bodybuilding-style program for giving you some extra testosterone. For those of us in the real world, I’d contend it’s even better.