Success Strategies for Racing in the Heat

People often have a nutrition and pacing plan, but not a plan for dealing with heat. Heat has an impact not only on racing, but on nutrition and hydration.

It’s ironic that people will have a solid nutrition and pacing plan, but not have a plan for dealing with heat. Heat has an impact not only on racing, but also on nutrition and hydration.

First of all, for sub-maximal intensity events (i.e. a marathon as opposed to a 5km time-trial run) there isn’t much science about performance in heat below 85 degrees Fahrenheit (thirty degrees Celsius). 85 may seem hot relative to where you are training, especially those going between seasons (e.g. traveling between the Southern to Northern Hemisphere), but the point is that although the temperature difference may seem high the actual impact on the body isn’t that great.

It is important to understand how cooling works in the body as it directly impacts nutrition. We’ll look at two examples in order to explain this:

The cooling system of a car is pretty simple. Water is pumped around the engine to the radiator, which presents a large surface area for the airflow/wind. The water is cooled by the air and pumped back to the engine to cool it.

It is a strange phenomenon that when water evaporates, the surface where it evaporates from is cooled. This is how evaporative (as the name suggests) coolers work. Water evaporates off the cooler’s surface, dropping the temperature. Air then flows across this surface and is cooled. Sweat performs the same purpose. As it evaporates, it cools the skin, which makes the “radiator” of example one more effective.

So sweat, blood, and skin are all part of the cooling process. In essence, our body acts as both a radiator, in terms of fluid (blood) moving around the body, and an evaporative air conditioner, in terms of the body’s ability to sweat and enhance cooling.

The important element here, from a racing and planning perspective, is evaporation. If we can hold fluid on the surface of the skin and allow it to evaporate, then we can actually enhance cooling. This is where clothing helps. Long sleeves are not just about sun protection (although they do help). Wearing long sleeves and pouring water on them can enhance cooling.

A number of companies such as DeSoto and Pearl Izumi make specific sun sleeves that can be used for this purpose. Pouring water on a porous cap like a Headsweats works well, too. It is better to wear a cap and pour water on it than a visor, as a wet cap is much cooler. 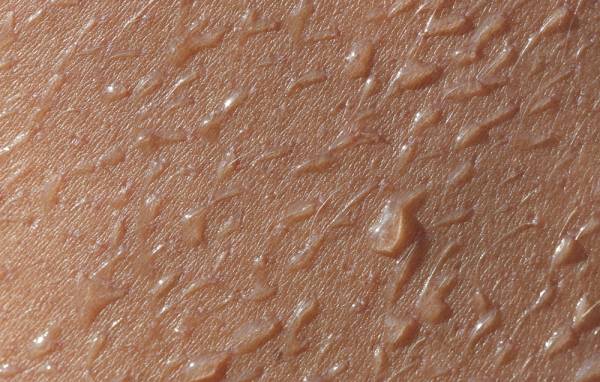 There are many examples of people like professional triathlete Torbjorn Syndballe carrying ice cubes to achieve a cooling effect. The palm of the hand is a sensitive area and has been shown in studies to work as a kind of super radiator. The issue with carrying ice is that the extreme cold causes blood vessels in the palm to constrict which translates to less blood flow and therefore less cooling.

Many of the studies disproving carrying ice had the ice applied directly against the skin. But when Syndballe used ice in Ironman Hawaii he was channeling Michael Jackson. He wore a single special glove, which meant the ice wasn’t directly on the skin.

As mentioned, blood is a critical part of the cooling process. In hot weather more blood flows to the skin. This means less blood is available around the organs, specifically the stomach and the liver, which slows digestion.

It is important to note there are only two types of natural sugars – glucose and fructose. (There are actually three, but we don’t care about galactose, as few people carry a carton of milk when training in hot weather.) All other sugars have to be converted to these, including the most common energy source in gels, maltodextrin. This conversion process is called exothermic, which means it generates heat. Not what we want in hot weather.

Foods digest more slowly when we are hot and the process also gives off heat. Therefore, we should choose foods that are easy to digest and don’t require conversion. Solid foods, fruits (bananas), and traditional gels that may work fine on cool days should be avoided. Simple sugars should be used instead.

In hot races, I recommend using dextrose (another name for glucose). You can find this at supermarkets. Brands such as First Endurance are great as their products are dextrose based but also include electrolytes and amino acids. Obviously these are things you should practice with in training in terms of preferences for taste and digestion. In short, never try a product in a race that you haven’t tested in training first.

Note: I haven’t mentioned salt. The bottom line is there is virtually no unbiased science supporting the use of salt. I see people after a race wearing salt-covered tri-suits saying they were low on salt. But if the body was in a salt deficit, why would it be expelling it through their sweat, as evidenced by their suit? If you want to take salt for a placebo effect, that is fine, but in the heat it is not uncommon for salt to cause gastrointestinal distress. 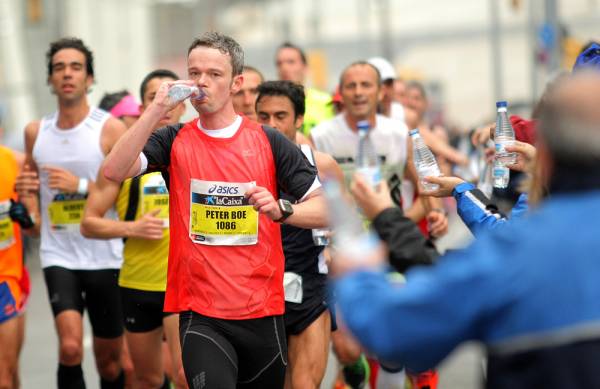 Dehydration is one of the biggest myths in sport. For those racing in heat, I strongly recommend reading Waterlogged by Tim Noakes, as much to placate your brain as for any other reason. Because the greater risk is actually consuming too much water, known as hyponatremia.

The best and most simple rule is drink to your thirst. The theory that if you are thirsty it is too late isn’t correct. If that were true mammals such as dogs would die of thirst. But drink to thirst doesn’t mean limit your drinking. It means what it says. In a cool race I might drink 500ml of water. In a hot race like Thailand I might drink three liters.

I recommend (and not just for heat racing) separating your energy/calories needs from your hydration needs. Meaning, use gels for fuel and plain water for hydration. In a hot race where you know you will be drinking more it isn’t as critical, but still should be considered especially when drink bottles heat up. The last thing you want is hot fluid being poured into a hot core. For cooler weather, combining your calories and hydration can mean drinking too much fluid and risking hyponatraemia.

Acclimation is two-fold. First, there are a number of adaptations that happen to the blood. The majority of these occur after four days of heat exposure, so getting to an event four to five days prior is a good idea. You can also simulate the heat (and also improve your cooling systems) by heating up your training. Wearing a rain jacket when running or doing indoor bike sessions in a hot room (laundry room with the dryer on) can help.

Second, a lot of heat acclimation is about tolerance. The brain will try and talk you out of exertion in the heat. Like I’ve discussed in previous articles, the work becomes about placating the brain through progressive exposure.

Here is what I recommend. When you do a hard swim set (or even bike or treadmill) and the gym has a sauna, jump in there. Your core temp will be up already so this makes it more effective. Sit in there as long as you can stand. This may be only ten minutes to start with. When you have to get out, then hit the start button on your watch and sit in there five more minutes. If you want to go hard-core do some star jumps or push ups while you’re in there.

When addressed correctly and smartly, dealing with the heat isn’t difficult. Few people have a plan that look at all aspects – nutrition, cooling, acclimation – so if you get this right, then you have a chance of finishing much higher in your age group at hotter races.