Swimming, as we know it, has four recognized competitive strokes: front crawl, backstroke, breaststroke, and butterfly. Then there are all kinds of variations of strokes, often out of inability to perform a standard stroke, like the” doggy paddle.” There is one, however, that takes center stage in the aquatic life of the American military, the combat side stroke.

Combat Side Stroke: What Is It?

The combat side stroke is a variation of the traditional side stroke, and one of the two strokes used by SEAL candidates in the SEAL Physical Screening Test (the other being the breaststroke). Among a number of other skills, a 500-yard swim of about twelve minutes is required to determine if a candidate is suitable to go to the Basic Underwater Demolitions/SEAL school. The combat side stroke is an efficient, low energy stroke, that allows a swimmer to perform without tiring for a longer period of time. It also allows for a reduction of the body profile in the water, making one less visible in combat.

How To Do the Combat Side Stroke

Like any other swimming stroke, there are some basic features. Any swimming is strongly dependent on core, and side stroke is no exception. A strong, engaged core will allow for the body to remain horizontal, decreasing the amount of drag caused by the lower body. While the head position isn’t as crucial in the combat side stroke as it is in freestyle, it still dictates the position of your hips. The higher the head, the lower the hips, and the more resistance from the water.

One of the standards in combat side stroke is that both hands must remain under water at all times. So when following the steps below ensure that at no point either hand comes out of the water, or it would be disqualified as combat side stroke.

There are two main components to the combat side stroke – the pull and the kick – and several options for both. While some swimmers and instructors prefer a stroke that alternates sides often, in my opinion I am more efficient on my strong side until I tire, at which point I switch. The basics, however, will be common to most variations of the stroke.

Two arms, two pulls, each with its own “personality.” While on your side kicking (we will cover the kicking details in the next section) there will be one arm under your body, the “underarm” and an arm that is higher in the water. The underarm has a very important role in stabilizing and balancing the stroke. The pull on this arm is similar to that of a breaststroke pull, and depending on how strong and proficient you are at swimming that could determine the length of the pull.

Some swimmers may opt to pull to waist level (this may lead to an imbalance in the stroke if improperly timed with the other arm), others to about armpit level, while others may opt for small, rapid circular movements commonly referred to as sculling. The second arm, or upper arm, uses a pull largely similar to that of freestyle or front crawl. The difference lies in the recovery of the arm, which happens partially submerged. While your arm may recover outside the water, your hand must remain submerged at all times. This results in a more low profile stroke, with fewer splashes, making it more discrete and appropriate for combat situations.

As with the pull, there are different kick preferences, and finding the one that works best for you is important. My preferred kick option is the standard flutter kick on the side. Side kicking is fairly strong and effective as it displaces water in both directions equally, unlike the standard up and down kick (an upward kick is possible but can prove difficult to master). I also tend to stay on my side without significant hip rotation, keeping the head slightly up to breathe at all times.

Other swimmers may do better with a more fluid kicking style that allows them to corkscrew through the water. In this case they will use a scissor kick. In this case the kick should be timed so your top leg always goes forward (no matter what side you are on). You should kick just after both arms have pulled and are recovering allowing you to corkscrew and glide through the water. This style employs hip rotation significantly more than the standard flutter kick. You can perform the combat side stroke with or without fins, but if you are swimming with fins the scissor kick method is not recommended. 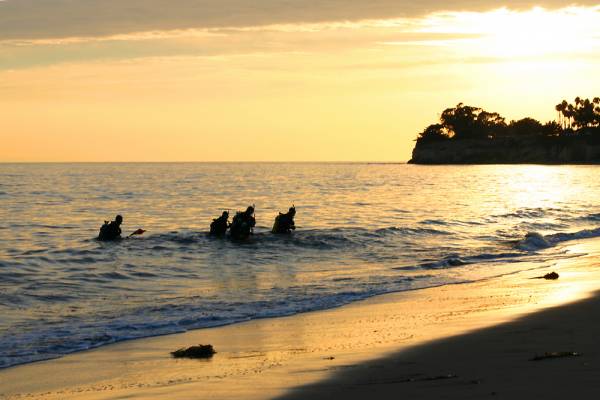 Whether you are a beginner swimmer on an aspiring SEAL the combat side stroke is a relaxing and effective means of moving through water. Outside combat situations it is a very effective survival stroke if you ever happen to find yourself overboard in the ocean.

If you are an aspiring special operator there are some fun additions you can make to the side stroke to make it more challenging. Try swimming fully clothed, or fully clothed with boots, or how about fully clothed with boots and a pack on your back? But wait, what if we now add a six pound weight to one arm to emulate the standard weight for an M4 (maybe a brick, or if you really want to “play” they make plastic versions of weapons that could be used to train)? The possibilities are endless, and the applications, well, they could be lifesaving.