Sometimes you come across people who just make you say “wow.” Meeting Jamina Winston was one of those for me. Growing up swimming with asthma, I always appreciated lung capacity and breathing to a degree the general population took for granted. I never met anyone else with that appreciation. That is, until I met Jamina, whose inspirational story I want to share with the world today.

Jamina is 29, stands about 5 feet tall, and weighs in at approximately 80lbs. Jamina has cystic fibrosis. But beyond the stats, Jamina is an athlete – a swimmer. If being a swimmer wasn’t impressive enough, being 29 and having cystic fibrosis is a feat in and of itself. When Jamina was 10 years old, the median survival age for a child with cystic fibrosis was 6. She was diagnosed with cystic fibrosis at age 3, started swimming at 5, and was a member of the swim team throughout high school.

What is Cystic Fibrosis?

Cystic fibrosis (CF) is a genetic disorder that causes the body to produce abnormally thick and sticky fluid (mucus). This mucus builds up in the breathing passages of the lungs and in the pancreas, resulting in life-threatening lung infections and serious digestive problems. The disease may also affect the sweat glands and, in men, the reproductive system.

Millions of Americans carry the defective CF gene, but do not have any symptoms. This is because CF is an autosomal recessive disorder, which means that two defective genes must be present, one from each parent, for the traits to be manifested. An estimated 1 in 29 Caucasian Americans have the CF gene. The disease is the most common, deadly, inherited disorder affecting Caucasians in the United States.

In practical terms Jamina has dealt with a lot of things that most of us cannot even imagine. These are life-long adaptations, and as she put it, “The only way I have lived since I can remember. I don’t know any different.” A typical day for Jamina starts with three nebulizer treatments, which last approximately one hour. She does these treatments twice daily, once after waking up and again before going to bed. Next comes airway clearance, which can be in the form of exercise (swimming, climbing, or hiking) or done mechanically using a valve designed to make her cough and clear her airways from the mucus buildup. That also takes approximately an hour from her day.

Due to CF Jamina developed diabetes, and she must monitor her levels thrice daily as well as administer insulin shots. Oxygen is a common fixture for most of her nights, as is the application of the nasogastric tube (NG tube) for night feedings, which she installs and removes all by herself. And that is impressive – an NG tube goes through the nose and throat, down to the stomach.

With CF comes frequent hospitalizations. Jamina estimates she spends about half the year now in and out of the hospital, usually in isolation (to avoid infections), which makes her feel very constricted and allows no space to walk around, let alone exercise.

One of the big challenges with CF is that it is very dangerous for people with CF to be in contact with each other, as they put themselves at risk for complicated infections. Jamina told me how hard it was to meet other people and share experiences, to learn from others. This was the situation for all CF patients until the Internet came around and virtual support groups started. This made sharing experiences much easier, and Jamina no longer feels “alone.” 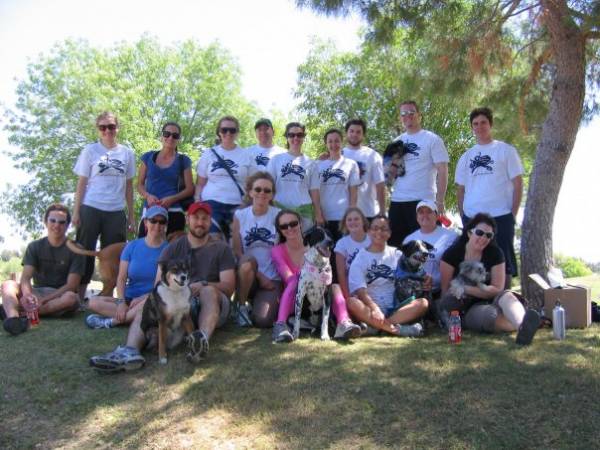 Every year Jamina participates in the CF Walk organized by the CF Foundation. She has been doing it since 2001, as Team Zoomina (Jamina works at the Phoenix Zoo as a special activities coordinator for night camp for children. Working with kids and animals is “the best of both worlds” as she puts it). Team Zoomina raises money for CF for awareness mostly. Explained Jamina, “The median survival of 6 years old growing up has now been raised to 37. I am now behind of the curve. This is because research and new treatments developed have greatly improved the quality of life and survival of people with CF. This is huge! The walk next year is on April 28th, and I am hoping I can add another couple thousand dollars in donations towards the CF foundation.”

From everything you now know about CF, you can probably imagine how swimming may be a challenging task for someone who has trouble breathing. While Jamina skipped swimming in college to focus on earning her degree, she found masters swimming upon graduating. She joined Mesa Aquatics Club Masters (MAC), the team she is still a member of to this day and that she trains with when not in the hospital. Said Jamina, “Coughing blood and being out of breath are common occurrences for me when I swim. But if I listen to my body and stay within the boundaries I am safe.” One of the adaptations Jamina uses often is swimming backstroke, because it allows her continuous breathing.

Last year Jamina accomplished two major feats for someone with CF. She completed the “Triple Bypass,” which is a session where you complete 10,000 yards of swimming in one day. She had to use fins on her size-two feet to complete this one, but she is very proud of this accomplishment. She also completed the Saguaro Lake night swim, again mostly with the use of fins and a lot of backstroke.

But Jamina’s biggest feat, in my opinion, is one I had the chance to witness and could not believe. In 2011 Mesa hosted the United States Masters Swimming National short course championships. Jamina had signed up to compete but was hospitalized a few weeks before. She was released from the hospital the day before the competition was supposed to start. With her IV still in she showed up to the pool knowing she couldn’t swim. Wanting to be part of the excitement, Jamina was assigned a volunteer job as the “clerk of course,” to help run the competition. 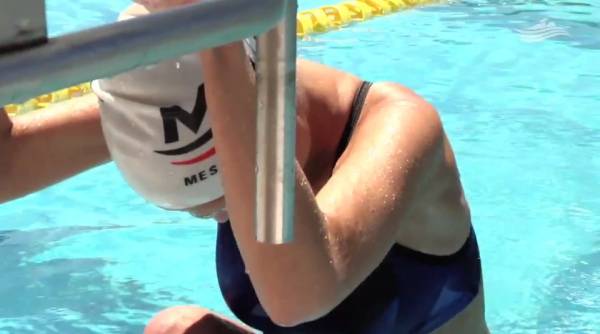 After three days of volunteering, on the last day of competition, was the last race Jamina had signed up for, the 50m backstroke. Jamina couldn’t hold back any longer and had to be part of the action. She put her two-piece practice suit on, cap and goggles, and she walked up to the blocks to be part of the competition as an athlete. “I didn’t know what to expect, but it was just a 50, and I got to swim on my back, which meant I would be able to breathe the whole way. My primary goal was to finish, but of course I wanted a good time, 45 seconds is what I was hoping.” She completed her 50 backstroke in :45.33.

Jamina considers herself a healthy individual, and credits her health and longevity partly to swimming, her vegetarian diet, and compliance with her CF lifestyle. She is a focused and determined athlete who inspires me. She currently is on a wait list for a lung transplant, hopes to participate on the Amazing Race with her sister, and swims with her “family” at Mesa Aquatics whenever she is cleared to swim.