If you have showed up to a masters swim practice you have probably noticed swimmers, or full lanes of swimmers, who will not put down their fins for anything in the world. They will wear them during the warm up, pre-set, main set, and cooldown.

If you have showed up to a masters swim practice you have probably noticed swimmers, or full lanes of swimmers, who will not put down their fins for anything in the world. They will wear them during the warm up, pre-set, main set, and cooldown. I am not sure if it is a case of “get the most bang for the fin buck” or a case of laziness, but it if it being used for every moment of swim practice it is certainly not being used as a training aid. That my friends, is what I call Chronic Fin Dependency, and likely falls into the cheating aid camp.

Don’t get me wrong, I don’t think fins are evil. On the contrary, I believe they are an amazing training aid when used properly. Swimmers have many types of fins to choose from, and each type has its purpose in training.

FINIS is probably my favorite fin supplier as they specialized in every possible type of fin. The ever so popular Zoomers fin first came out as two variations of the short blade fin family – the softer, for less flexible ankles (blue), and the harder, for more flexible ankles (red). These are now history, and the Zoomers come in the variants Zoomers Gold, Zoomers Fit, and the Z2 Gold Zoomers, all short blade fins.

The Zoomers Gold are the evolution of the classical zoomer, and a hybrid of the original red and blue fins. They have a wide application in workouts strengthening the kick overall. A great tool for kick sets designed for kick speed and strength. 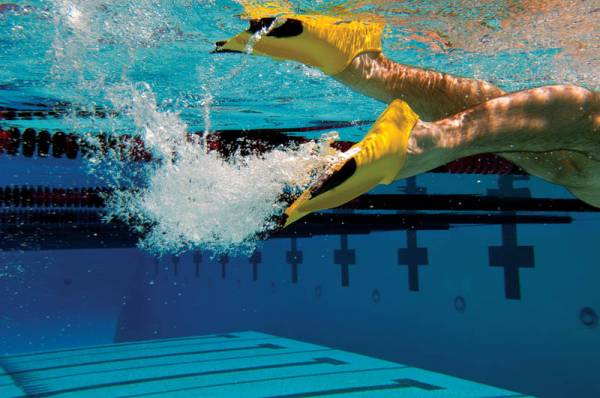 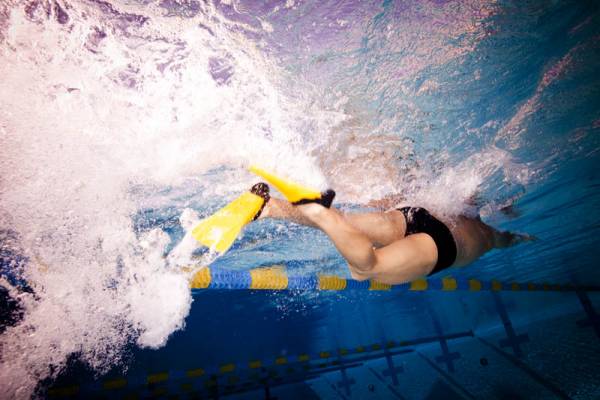 The Zoomers Fit are probably one of the best beginner fins. They share many features with the two previously mentioned fins, including the short blade construction and the flex box on the bottom to focus on the upkick, but they are also buoyant, encouraging an elevated body position and keeping the legs active during the swim. 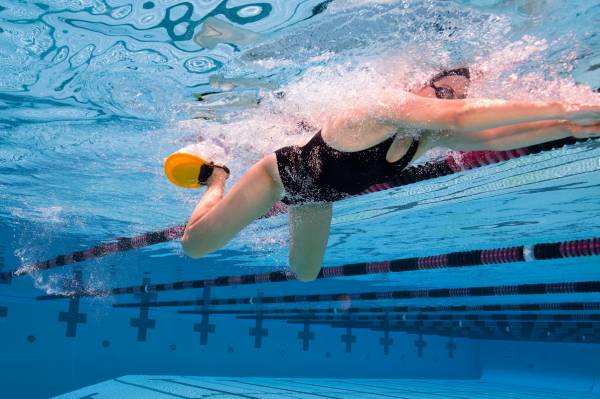 A novel type of fin, the Positive Drive Fin, is now also available and suitable for all four competitive strokes. Yes, even breaststroke. These fins have a unique ellipsoidal blade that promotes correct propulsion for any of the strokes. The asymmetrical shape and adjustable heel strap allow the swimmer to safely build power in the breaststroke kick. The short and wide blade design also promotes a natural inward supination kick style for backstroke, butterfly, and freestyle. These fins increase leg strength, foot speed, and ankle flexibility for all four competitive swim strokes, making them a great tool for training the individual medley. 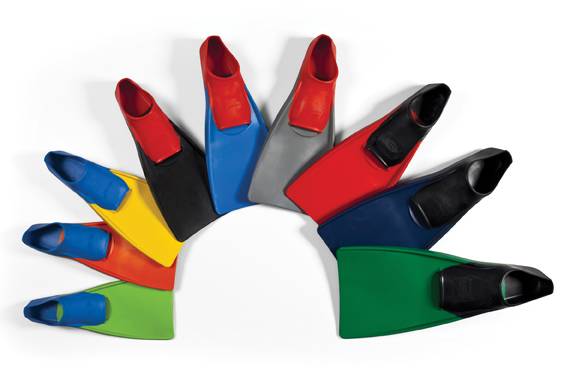 The traditional long blade fin are often the biggest culprits as a cheating aid. The long hydrodynamic blade promotes slow kicking style while adding propulsion and lifting the body position high in the water. While strengthening the leg from its use, these fins can easily become a crutch to the lazy kicker who uses them to just carry their legs through while they swim. Nonetheless, long blade fins aren’t evil and they can be a great tool to learn propulsion in the flutter and butterfly kicks, as the longer kick promotes the use of the hip for propulsion.

Very long blade scuba-style fins while particularly suited for scuba diving have virtually no use as a training aid. While they could be used for increase in power output from the kick, by virtue of such a long blade foot/kick speed is much too slow and not particularly useful for training pool or open water swimming.

There is one last type of fin that although not very widely used, it has great advantages as a training tool: the monofin. The monofin is a single bladed fin, that will only allow a synchronous kick like the dolphin kick. FINIS is the “parent” of the monofin and today close to ten variations of the monofin are available for different applications and emphasis. Most of my personal experience with the monofin is with the Shooter. 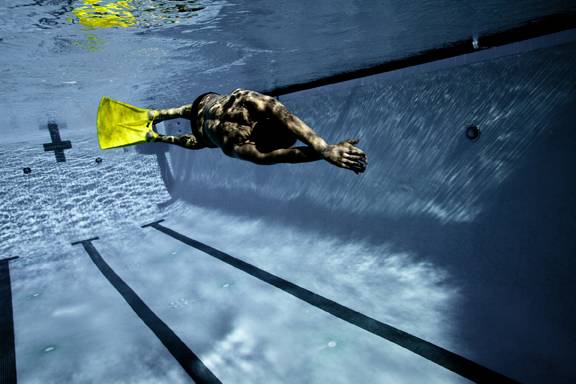 While at first they may appear silly to some with no real application, I can guarantee you this is far from the truth. Monofins engage proper swimming form with engagement of the abdomen, glutes, lower back, and quads. It also promotes foot and ankle flexibility, while developing extreme kick power. These are great tools for any underwater work (both dolphin kicking in the prone position as well as underwater backstroke kick), but also for breaststroke drills. They increase awareness of kicking from the hip, as opposed to kicking from the knee, while promoting appropriate body balance and positioning.

The Foil Monofin, one of the monofin variants, is an amazing training tool at emphasizing both the up and down kick equally, creating a powerful undulating movement carried throughout the dolphin kick. This fin was made popular by coach Bob Gillett and his most famous pupil Misty Hyman, 2000 Olympic Gold Medalist in the 200m butterfly.

From all the information above it appears that the scale tips to fins being a great training aid. They improve ankle flexibility from the extra force the fins place on your ankles as you kick. The increased ankle flexibility results in a more efficient flutter or butterfly kick. It also improves kick speed and sensitization to the up and down kick. And when used with appropriate sets it is a great overall workout at strengthening core and legs, as well as promoting appropriate body position.

Lets stop giving fins a bad name, dear swimmers suffering from Chronic Fin Dependency, and only use fins for what they were designed for and not to catch up to the swimmer ahead of you not wearing fins, or to just swim with lazy legs and let the fins carry them for you in the correct position, or even just for the mental satisfaction of looking at the clock and feeling like you are swimming so fast you have made such an improvement. Chances are if you are doing any of those, you are only sabotaging your opportunity to progress as a swimmer. So take them off from time to time (or most of the time) and do some work.