Swinging the Bat: How to Do the Muay Thai Roundhouse Kick

The most devastating kick in martial arts is the roundhouse kick. There is significant technique to the muay Thai roundhouse kick, though. I’m going to walk you through it, step by step.

The most devastating kick in martial arts is the roundhouse kick. This is in large part why muay Thai has become the preferred stand up modality for many MMA fighters. While muay Thai allows for elbows, knees, and spinning back kicks, the foundation of the art is the roundhouse kick. While it isn’t necessarily the prettiest kick, it’s the most damaging, and make no mistake, the goal in fighting and the mixed martial arts is maximal damage.

I started my journey in the martial arts studying Shaolin kung fu. I love the pretty circular movements found in the Chinese martial arts. My favorite kick was the crescent kick, or outside half-moon kick, because it’s flashy. That circular high kick and some similar kicks thrown in many martial arts have a particular aerobic and spectacular beauty to them. While beautiful, such kicks have limited effectiveness in a street fight. I have yet to see a crescent kick thrown successfully in the UFC. When it comes down to real fighting, if you’re going to throw a damaging kick, make it a roundhouse kick.

With that in mind, let’s consider two key questions:

To the first question, the muay Thai roundhouse kick is so damaging because it uses the whole body in the same way swinging a bat is ultimately a full body motion. When swinging a bat, we move through the ball, using our legs, core, and arms. In a similar sense, our roundhouse kick moves across the opponent by using the rotation of our bodies when kicking. This kick generates superior force by weight transfer and connecting to the ground, versus the snapping motion that many other martial arts kicks use.

Start With Your Stance 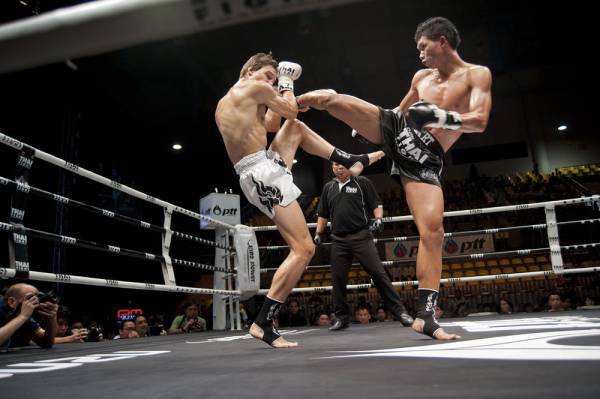 With the weight on the ball of your foot in the front, it allows you to easily lift up the foot for a lead left roundhouse or to pivot on the ball of the foot to start the rear leg roundhouse. Once you have the foundation correct, you are in a position to begin your roundhouse kick. For ease of explanation, I’m going to assume you’re right-handed and therefore your left leg is your lead leg.

Pivot the lead/left leg on the ball of the foot and open up the rear/right hip as you begin your motion. This can be performed by stepping with the lead leg to a 45-degree angle or skip stepping to generate more power. 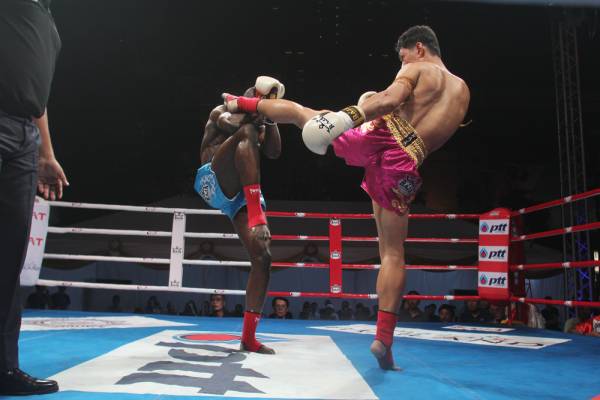 Note that any time a step is added to a kick sequence it takes time, giving your opponent the opportunity to adjust or counter. When pivoting, the kicker is coming up on the ball of the foot completely to generate maximum speed.

As your hip opens and you swing your rear/right leg, point the rear knee toward opponent as you pivot. As you pivot the lead foot, that heel rotates towards your opponent. Also slightly bending the front knee of your lead/left leg will enable you to generate more torque and power. Power, though, ultimately comes from the hip. Your right hip should fully rotate over the left hip while you swing your body. This means your kicking hip ends up in a parallel position over the hip of your base leg.

Yet another way to generate speed and power is to whip the hand down at your side of the kicking leg. This is done at the risk of leaving your head open to a counter strike, so use this technique with caution. It’s vital to keep your other hand up near your chin to help protect from this counter attack.

Impact. Connect with the shin right above the foot. Your kicking leg should be straight, for the most part, as you make impact. Remember, the leg comes across your opponent like you’re swinging a bat. Once you’ve made contact, bring that leg back the same way you came in, and do it quickly. Leaving your leg out there even for a fraction of a second is another good way to leave yourself vulnerable to a counter and/or takedown. Kick hard and fast, and then move. 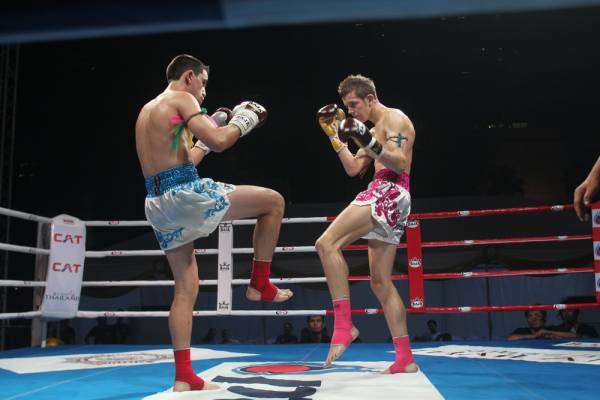 The muay Thai roundhouse kick is the mother of power kicks, but it’s certainly not the only effective kick. In fact, while it’s unparalleled in power, it takes more time to throw. The commitment of rotating the hips and even whipping the arm down can leave one vulnerable to a take down. Using the roundhouse kick effectively can be tricky in the way that using a powerful right cross in boxing requires being set up. This is because of the commitment of transferring your weight towards your opponent and the time taken to throw it correctly. Therefore, a roundhouse kick has to be used strategically. When it is used effectively it is an awesome and powerful sensation in the way that swinging a bat and connecting with a ball gives one such a pure feeling of power and speed.