In the very beginning of my near-perfect fourteen year marriage to a great tennis player/coach, I took three tennis lessons. And that was that. The decision to not take more lessons was an unspoken mutual one. He didn’t have the patience to teach me then. I didn’t have the patience to hear any kind of instruction from him. I remained a devoted fan of the sport as I had been since I was little. He remained a great coach and competitive player. He eventually took our youngest daughter, Mina, under his wing when she showed interest in the game, and now at thirteen she is already a very good player.

But now I want to play tennis after more than a decade of not giving it a second thought.

When I first walked into CrossFit LA a couple years ago, there was a floor-to-ceiling white board covered in the philosophies of CrossFit hand-scrawled in dry erase marker. I remember most distinctly a pyramid mapping out the theoretical hierarchy of fitness development. It started with nutrition as the foundation and narrowed as it went up, covering metabolic conditioning, gymnastics, and weightlifting. What I found interesting was at the apex of the pyramid was the word “sport.” At the beginning of my CrossFit journey the lower foundations were plenty to keep me overwhelmed for a good while, but the idea of sport being at the tip was most definitely noted and tucked away until I could understand better why this was an integral part of CrossFit philosophy.

I can’t say I’ve mastered the lower rungs of the hierarchy pyramid, but what I’ve come to understand more fully is that nutrition, metabolic conditioning, gymnastics (bodyweight movements), and weightlifting are about developing our health and fitness, while sport or playing a sport is more about the expression of this fitness. Now that we’re super fit, let’s have some fun playing something. I love this idea, but I had not been motivated to dive back into the sports I played when I was younger nor was I intrigued enough to test out anything new. I believed CrossFit was my new sport, which in a way it is, but the more comfortable I became training at a certain level, the more I craved the fun of just playing.

I have flirted with tennis without any real commitment most of my life. As a kid, I was handed down a beat up wooden racket, and with found balls I’d try to hit against a brick wall in our alley for hours. The number of times I shanked the ball off the tiny racket head or the number of balls that hit the wrong corner of an uneven brick was countless. My fitness level was top-notch just from retrieving balls.

Last year, Mina started dragging me out to a local court so she could use me as target practice for serving. I was given the crappiest racket in the garage and eventually I would try to return her serve. Then we made a game of it: any time she aced me I had to do burpees or pushups or sprints or sit ups, and anytime I hit a clean winner, she had to do the same. I can only imagine what we looked like from the street – a couple tennis strokes and then a mad dash of calisthenics. Eventually, I became better at returning her serve until Mina accused me of secretly taking lessons from my husband. She was bummed she couldn’t make me do burpees at will any longer. And that got me thinking. Maybe I should just commit already to a sport I’ve loved for most of my life. The obviousness of it all was almost embarrassing. 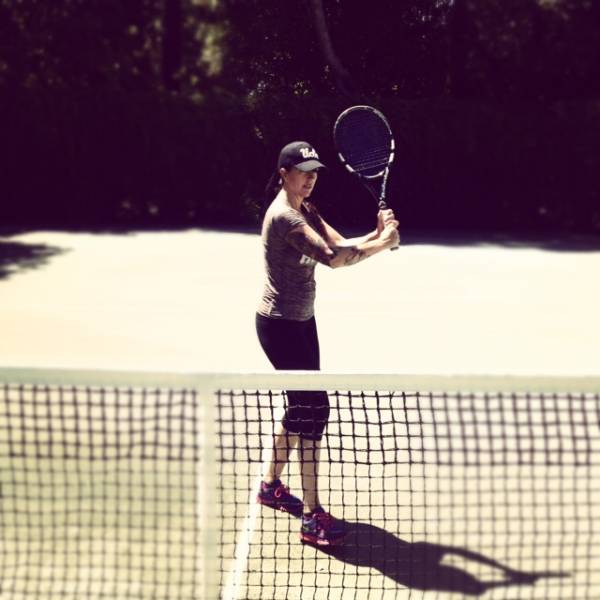 As sports-adventurous as I’ve been in the past, the thought of taking up something new now that I’m in my forties was admittedly slow going. Couldn’t I just pat myself on the back – again – for attempting to lift heaving bars over my head? But trying new things is arguably a key to happiness. Dr. Todd Kashdan, a psychology professor from George Mason University suggests that trying new things is directly related to our wellbeing. When we move out of our comfort zone to try something new, our brain produces a chemical known as dopamine. Dopamine kicks in whenever we are in an unfamiliar situation. This high level of dopamine generates a feeling of wellbeing and keeps us in a constant high-spirited state. New things can also keep our brains healthy and can actually be linked to slowing cognitive decline. Dr. Kashdan said:

One of the first markers of Parkinson’s and Alzheimer’s at the neurological level is inability to manage and deal with novelty, an early sign of degeneration. It includes not only an unwillingness to go seek out the unfamiliar and a clinging to the familiar, but an actual aversion when they’re faced with something that they’ve never seen before. Dopamine is linked up with anticipating rewards, and so it’s closely linked to curiosity. Dopamine kicks in when we see that there’s something novel. Dopamine circuits are short-circuited in the early stages of Parkinson’s and Alzheimer’s disease.

I’ve been taking tennis lessons for a month now. My husband is patient when coaching me and as I work as a coach myself now, I’m a much better student. During my first couple lessons, I couldn’t believe how gassed I was learning new strokes and foot work. Doubled over after a few drills, I said, “Man, I thought I was in shape.” My husband said, “Of course you’re in shape. You’re just holding your breath trying to get it right. Also, you have a death grip on the racket. Relax. Enjoy the process.” That’s always good advice.

And honestly, I’m thoroughly enjoying it. I can’t wait to get better and start playing against other people – maybe even kick Mina’s butt once or twice. In the end all I can say is, another round of dopamine, please!