The Best Abdominal Exercises for the Strength Athlete

I believe that paused rollouts, Pallof presses, and loaded carries are some of your best choices for stable abs.

Take a look through the training program for any athlete in a strength sport (weightlifting, powerlifting, strongman, etc.) and you’ll typically see the following exercises programmed for the abdominals: some form of hanging leg raises, weighted crunch or sit up variations, and maybe some light planks. While there isn’t anything automatically wrong with some of these exercises, especially the planks, there are better and more useful options available.

What’s Wrong With Your Ab Training

For many events in strength sports, bracing and stability are the key actions that we want from the abdominals. Why, then, do most of the ab exercises that strength athletes do neglect these qualities?

Sure, doing some hanging leg raises can help improve abdominal strength, and practicing toes-to-bar can be beneficial for CrossFitters as they can be used in competition. But when you’ve got a max jerk overhead, you have to run the gauntlet of Fingal’s fingers, or you’re trying to stay tight at the bottom of your third squat attempt, you’re going to need incredibly stable abs.

With the need for bracing and stability in mind, I’ve compiled several abdominal exercises that can benefit any strength-oriented athlete. With each of these exercises, be sure to focus on bracing the abs by breathing in and expanding the stomach while flexing and squeezing the abdominal muscles. Also, just like any other exercise, start light and work your way up.

Ab rollouts have become pretty mainstream over the years, which is great to see as they are a fantastic exercise. However, a lot of trainees tend to speed through each rep by performing them in a quick manner.

To focus on the purpose of this exercise, which is core stability and resisting spinal extension, I recommend slowly rolling out and pausing at the bottom of each rep for 3-5 seconds. Adding the pause at the bottom is remarkably more difficult and makes a great core stability exercise even better.

To execute, face away from the cable cross with your head in between each end of the rope. In a split stance or half-kneeling position with the cable arm at its highest point, press the rope up and away from your body.

Hold the extended position for 3-5 seconds while maintaining a neutral spine. Repeat for 5-8 repetitions. This exercise can also be done with resistance bands if a cable cross and rope are not available.

Training the abdominals to resist lateral flexion is another intelligent choice for strength athletes. A terrific exercise to train this quality is the lateral Pallof press.

For the lateral Pallof press, use a handle attachment and face to the left or right of the cable cross. Keep the handle at chest level in the same split stance or half-kneeling position as the vertical Pallof press. Press the handle up to lock out the elbows.

Hold the extended position for 3-5 seconds while resisting the torso’s urge to enter lateral flexion (bending to the side). Repeat for 5-8 repetitions on each side.

As you can see, I’m a huge fan of Pallof presses for abdominal strength and stability. The glute ham raise (GHR) Pallof press is a combination of anti-rotation and anti-extension exercises. It forces the abs to resist rotation from a resistance band while simultaneously fighting the forces of gravity to resist spinal extension.

Facing up toward the ceiling with your feet locked securely into the GHR, hold the other end of the resistance band at chest level. Keep your torso at a slight incline and press the band away from your chest.

Hold for 3-5 seconds and bring the band back to your chest to repeat for 5-8 reps on both sides.

The Yoke Walk (or Any Other Loaded Carry)

Like many trainers, I’m a big enthusiast of loaded carries because they can produce a ton of benefits, including core strength and stability. If you compete in strongman, then you’re most likely already doing a good amount of yoke walks and other loaded carries, as they are common competitive events. However, for those who train for other strength sports, carries can be rarely seen in the gym.

I unintentionally discovered the excellence of yoke walks several months ago. At that point I had done pretty much every type of loaded carry there is, except yoke walks. It’s not that I had anything against the walk. I just never thought to do it.

So one day in the gym, in an effort to make the relocation of my bar and bumper plates from the jerk blocks to the squat rack more efficient, I decided to keep the barbell loaded and carry it across my back to my destination. The walk couldn’t have been much more than twenty feet, but that’s all that was needed for me to jump on the yoke walk bandwagon. 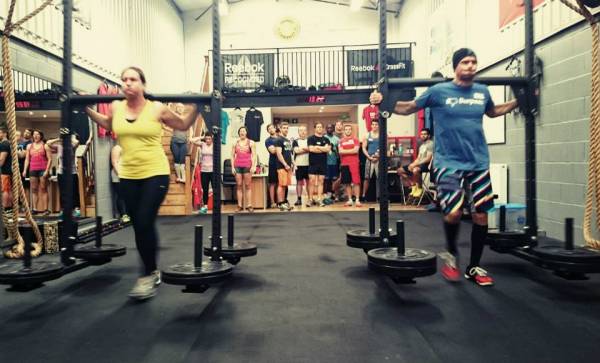 Yoke walks can be done with specialized yoke walk equipment or with any type of barbell. Load up your instrument of choice, hold it in approximately the same position as you’d hold the bar for a back squat, and then walk. As stated before, any loaded carry is a great choice. Farmer’s walks, suitcase carries, waiter’s carry, rack carry, etc. are all superb options.

For non-strongman competitors, start with a weight that’s challenging to complete for about 15-20 yards.

The Takeaway on Ab Training

Of course, I’m not saying that the ab exercises above should be the only choices for strength athletes. However, I am saying that paused rollouts, Pallof presses, and loaded carries are some of the best choices.

Give these exercises a shot and let me know how it goes. Leave your thoughts and questions to the comments below.