On September 18, 2011, the Dog Brothers held their Summer Gathering of the Pack at Gokor Chivichyan’s Hayastan Mixed Martial Arts Academy in North Hollywood, CA. Describing themselves on their website, www.dogbrothers.com, as “a bunch of sweaty, smelly psychopaths with sticks,” the Dog Brothers is a group guided by Marc “Crafty Dog” Denny that enables participants to test their physical, mental, and psychological mettle in live combat using stick fighting, grappling, knife fighting, or some combination of these.

The Dog Brothers’ credo, “The greater the dichotomy, the profounder the transformation. Higher Consciousness through Harder Contact,” provides some insight into the goals of the organization: enabling members to access some of the more primal aspects of human experience that relate to survival, group identity, and protection of the members of that group.

Competitors at Pack Gatherings square off against one another in physical combat using the aforementioned tools, though the emphasis is on the experience of combat itself rather than a specific item or method. Fueled by adrenaline and self-preservation instincts, competitors strike a balance between pushing their own personal boundaries and maintaining their composure in the heat of battle. The Dog Brothers believe these combat experiences have a profound influence on group members’ perspectives and beliefs and that this influence can and should translate into other realms of life. 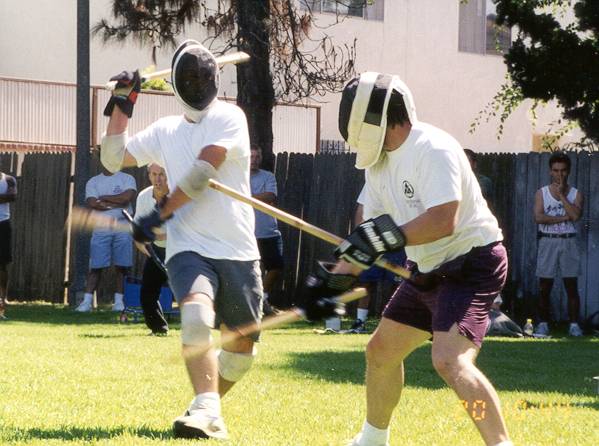 A wide variety of martial arts traditions are drawn upon in their training, including Filipino stick and knife systems, Brazilian Jiu Jitsu, stickgrappling (the Dog Brothers’ own creation), Krabi Krabong (a precursor to Muay Thai Kickboxing), and Dog Brother Kali Tudo ™, which includes striking, throwing, and trapping.

In a manner similar to other combat-related tests of skill and fortitude, the Dog Brothers create an environment where participants can “leave it all out there” in battle and then come together afterward, believing that in pushing one another they have brought out the best in everyone. To quote an excerpt from the opening words at each Gathering, “One rule only: Be friends at the end of the day.”