Doug Hepburn strict pressed 380 pounds back in 1954. He also shared with me his bench press routine, which he says made his press so strong. Read on for a little history and the routine details.

Probably the most impressive piece of weightlifting film that I ever witnessed was a 380 pound press made by Doug Hepburn in the 1954 Commonwealth Games held in his home town of Vancouver, British Columbia, Canada. Many of you will have seen this on YouTube. The quality of this near six decade old, black and white film is not that good, but the quality of such a lift still is.

I saw it first on the Jumbotron at the 2003 Worlds, also held in Vancouver. Several things made that witnessing even more impressive. Image size was obvious. Another was that it was shown to an audience who knew the quality of the lift they were watching, since they were all long-time lifting people who remember the press. The strictness of the lift brought groans from that knowing audience. Doug split cleaned the weight, then set himself, got the clap, and pushed the weight straight up, no back-bend, no monkey business at the start.

But what was most impressive was the speed of execution. I had seen that lift before, but always in slow motion. What I was soon to discover was how fast and easy that lift looked when shown at normal speed. Even the slow motion would have been fast for most of the grinding pressers of that era, but this was truly eye-popping, going up like it was a 135 pound warm-up. Hep once told me he did 405×5 off the rack in the training hall that week and now do not doubt that he did.

Now fast forward to the last year when I decided to junk the machines get back to some real lifting like I did in my youth. At 63 I’m too slow and tight to do any decent quick lifts so I decided to concentrate on the presses. I always regretted the loss of that lift from competition so I decided that I would indulge my sense of nostalgia on a lift I still could do.

When pressing I always think of Hepburn and his awesome overheads, so for inspiration I decided to re-read Bill Starr’s seminal book The Strongest Shall Survive. I had met Bill in 1971 and bought his book back then. In it he recommends the Big Three (bench, squat, power clean) done 5×5 ramping up for beginners, but straight across for the more advanced. Militaries and inclines were recommended for variety so I decided on three pressing days a week: overhead, flat, and high inclined.

A little more than a year ago I started this routine, doing quite well, age considered – doing about 80% of my youth’s PRs. In recent weeks I had been doing the old reliable 5×5 straight across system. Strength gains were there, but inevitably slowed down. This is to be expected, what with the law of diminishing returns and my age factor thrown in as well. My immediate response was to redouble my efforts. This helped some as the body slowly adapted to heavy pressing after a fourty year lay-off. I got very good at doing fives, especially if I was able to sneak in a stretch reflex as I lowered the bar for the next rep.

The problem was whenever I loaded up some extra weight to try a limit single I was never able to do much more than my max for fives. Obviously, I was over-adapting to higher reps and at the same time I was subtly backing away from the challenge of a heavier single. The diagnosis was simple. My Golgi tendon organs were not getting the stimulus needed to enable their muscles to adjust to the heavier weights. And I was probably also getting psychologically over-awed by the heavier weights. Changes were in order.

I remembered my chat with Hepburn and him telling me he could still do a 350 pound bench at the age of 57 and at much lighter bodyweight. That inspired me to look up the half-forgotten Hepburn bench routine I saw in Starr’s book. The routine as outlined by Starr was simple. Ramp up with about five sets of warm-ups, then hit five singles at about 90-92% of 1RM. Then do 5×5 across back-up sets at about 75%. The back-up sets should be a wee bit lighter than what you would do 5×5 without the singles or else it may get to be too much. You get some high intensity singles but also some fives for volume and some hypertrophy mixed in. 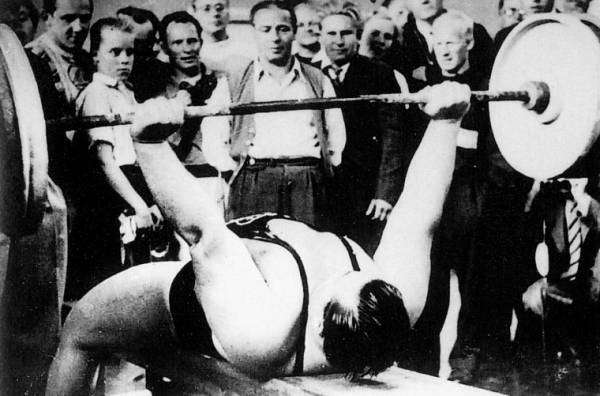 Many years ago I was able to ask Doug Hepburn himself if this was indeed his routine, since time has a way of distorting and altering details when ideas are passed from person to person many times. Hepburn just answered “Yeah, that’s about it, more or less.” He equivocated since he said that he seldom did the exact same rep and set regime twice, but the 5×1, 5×5 was close enough. The singles get the muscles used to a single high intensity effort, and that effort will not have a second rep that you can bounce up to fool yourself as to your real strength level. Starr recommended doing this only once a week but I have been doing twice or more with no fatigue. Sometimes I have had to miss workouts due to other obligations so I may be inadvertently getting needed rest that way. I do seem to do better after such a rest.

I have been doing this with all my presses – militaries, inclines and benches. The routine has been especially good on the flat ones, since those were where I was furthest away from my max, absolute poundage-wise. I believe it has also helped the other two. I have had some recent PRs as I am getting used to attacking the big ones. My fives are also feeling stronger.

So don’t ignore the heavy singles. Seems to me the Bulgarians know something about this too. Doug Hepburn also insisted his bench (500-plus) helped even his overhead lifts. Who are we to argue? He had the numbers, few others did. And he had them sixty years ago.