The Relationship Between Injury and Back Pain: Neutral Spine Versus Flexion

The spine is a highly complex structure, and injury mechanisms are by no means straightforward.

I have seen an abundance of information on back pain that makes definitive claims when in reality it’s not that clear cut. The spine is a highly complex structure, and injury mechanisms are by no means straightforward. This article is not meant to be prescriptive. The purpose is to shed light on this complex subject to impart a better understanding of the mechanisms involved in back pain and treatment. My position on injury is that you should always consult a qualified professional like a physical therapist. They will be able to assess your individual circumstances and prescribe the appropriate treatment protocol.

That being said, let’s dive into back pain and all its unique aspects.

Mechanisms for Disc Herniation and Back Pain

In the diagram below you can see the basic structure of the discs and the vertebral joints. A disc herniation occurs when a fragment of the disc nucleus is pushed out of the annulus and into the spinal canal through a tear or rupture in the annulus. Anterior herniations are very rare, with most herniations being posterior or posterolateral, as shown by the red arrows in the diagram below.

Tears in the annulus are the most common posterolateral because of the anterior longitudinal ligament which rests at the front of the vertebral column as shown in the diagram below.

A 2009 systematic review found “In people aged 25-55 years, about 95% of herniated discs occur at the lower lumbar spine (L4/5 and L5/S1 level); disc herniation above this level is more common in people aged over 55 years” and “19-27% of people without symptoms have disc herniation on imaging”.2

This is in line with what we currently know about the common injury/pain sites for powerlifters and bodybuilders.3

However, disc herniations linked to back pain are rather uncommon and are estimated to be between 2-5%.7 When you flex your spine, especially under load, it compresses the anterior side which forces the nucleus of the vertebral disc posteriorly where the annulus has only a thin wall protecting it.6

This is not a direct mechanism for injury but under heavy loads and/or high repetition it may increase your risk.4,7 High load compressive forces under flexion also increase anterior shear which is often associated with an injury.7 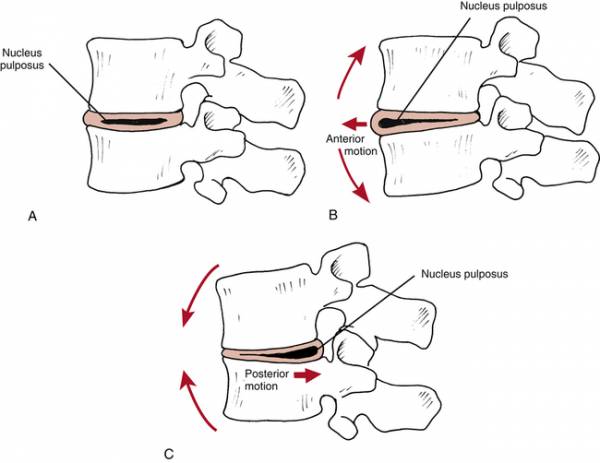 A vertebral endplate is a cartilaginous structure important in maintaining the integrity and functions of the intervertebral disc.8

Endplate fractures can occur under similar circumstances as herniations but the rate of pressurization/loading seems to have a significant impact on fracture rate.9

Wade et al (2015) found virtually no difference in the total amount of compressive force required to cause endplate fractures when comparing neutral to flexed positions.7 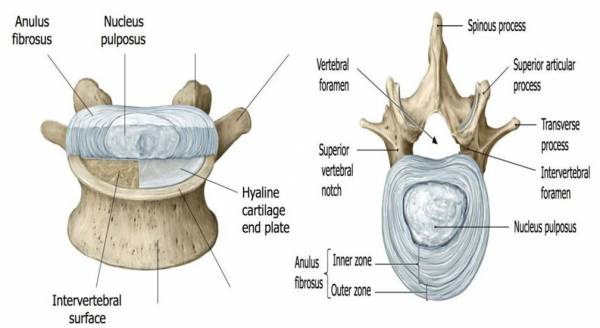 Based on what we’ve reviewed so far it’s easy to see how flexion and rotation, especially done repeatedly and under load, play a role in back injury and pain. Unfortunately, it’s not quite so cut and dry. Studies have shown the positive characteristics of spinal movements including flexion for maintaining a healthy spine.10,11 Beyond that, disc degeneration is complex.

Several studies have also found a strong genetic association to back pain that disrupts the commonly held belief that loading exposures is the primary catalyst for back pain.13,14

One paper found that changes in compression forces were not predictive of damage type to discs and that its failure mechanism may be linked to fatigue.15

This suggests an adaptive potential that through mindful exposures can increase fatigue resistance increasing resiliency. Other studies have pointed out the limitations to in vitro models which are often used in the classical pain/injury model associated with flexion, rotation, and compressive forces.

Researchers have discovered that “an in-vitro model for studying fluid flow-related intervertebral disc mechanics. During loading, the outflow of fluid occurred, but inflow appears to be virtually absent during unloading. Pro-elastic behavior cannot be reproduced in an in vitro model.”16

Basically this means that the studies are limited because in-vitro models don’t account for certain adaptive properties of tissues. Spontaneous reabsorption of lumbar disc herniation is an observed phenomenon that according to the data occurs roughly 66.66% of the time.17

This is yet another aspect of the body’s natural ability to adapt which is often underplayed in the anti-flexion debate.

One study found “Total bending cycles have ranged from 4,400 to 86,400” before causing partial or complete herniations to the posterior annulus.18 From a practical standpoint, this shows that there is a significant range of unpredictability. I don’t doubt that flexion and compression may feed into the injury mechanism. What I question, however, is the degree of association that can confidently be reported.

Even research establishing that tissue remodeling is a response to compressive loading presents a potential case for intentionally going into flexion under specific circumstances such as sports practice.19

Physical activity strengthens the vertebrae and the discs potentially reducing your risk of injury.20 The predominance of back injuries occurring in the lumbar spine brings a new layer of complexity to this discussion since spinal flexion in powerlifting typically occurs in the thoracic spine.

In fact, the number of elite dead-lifters that pull with a rounded upper back is by no means small. Beyond that, when an athlete is loaded maximally there will likely be an increase in spinal flexion anyway.21

Even with this occurrence powerlifting still maintains a relatively low injury rate estimated between 1-5.8 per 1000 hours of training.22 It’s likely that both sides of the debate are right, but to varying degrees and in varying circumstances.

I tend to agree that lumbar flexion is probably not the best idea when combined with axial loading. However, I do not believe flexion, in general, is a direct mechanism for injury. You only have to look at sports practice that has dynamic flexion/extension like golf, cycling, rowing, skiing, and snowboarding to know that it’s more complex than simply flexion. Beyond that, sports that involve a higher level of flexion do not report a higher rate of back pain.23

The Body’s Adaptability to Repeated Flexion/Extension

Recommendations to avoid flexion based movements are made due to the research that demonstrated herniations and endplate fractures which occurred at the end of the neutral range of motion segment flexion.

The problem with this is that numerous other examples take the motion segments to the same end range and we don’t see any mechanism for injury. Squats reveal approximately 40 degrees of flexion, golf 48% of max flexion, kettlebell swings 26 degrees of lumbar flexion, and the list goes on.24

So, why do we see a strong injury mechanism in one instance and a weak correlation in the next? I think it just reinforces how complex this subject is and how highly specific circumstances and variables can influence the risk and injury outcomes.

The adaptability of the body is a major factor in this, although it’s important to note that your body’s adaptability to repeated flexion/extension is not infinite. As observed with several other adaptive processes such as strength, endurance, and hypertrophy we will eventually run into our upper limit.25

The problem is that in the case of flexion based activities we don’t know where that upper limit is which poses an inherent risk.

Below is a summarization of the literature on back injury and pain along with some practical recommendations.

Low load flexion activities like tying your shoes, picking up your baby, playing sports and the like are not things to be avoided. Full steam ahead.

I don’t see low load repetitive spinal flexion as a bad thing especially when you consider the number of athletes who go into flexion and extension dynamically in their sport.

There is not an increase in the percentage of back pain or incidence of injury, so I find it hard to believe flexion in this circumstance increases risk. The caveat to this is if an exercise causes pain. In this case, adjust the exercise so it does not cause pain. If this is not possible then avoid it at least for the time being.

In this respect, I support the neutral spine position. First and foremost, when it comes to exercises like squats and deadlifts I don’t see an inherent benefit to flexion. So from an efficiency standpoint, neutral spinal position is in most cases better for athletic performance.

Flexion based movements aren’t necessarily dangerous, but that doesn’t mean they’re inherently safe and it certainly doesn’t make them better. All things being equal I would go the safe route and adopt a neutral spinal position when under heavy loads.

I hope the above recommendations are helpful in guiding you through your training. Good luck and lift big!

19. Brickley-Parsons, D, and M J Glimcher. “Is the Chemistry of Collagen in Intervertebral Discs an Expression of Wolff’s Law? A Study of the Human Lumbar Spine.” Spine, U.S. National Library of Medicine, Mar. 1984.

20. “Physical Activity and the Strength of the Lumbar Spine.” LWW.