Throwing Caution to the Wind: Overcoming Instincts to Progress Athletically

Our survival instincts aren’t always the most useful thing when it comes to our training. In fact, we may be putting ourselves in danger, by choice, on a daily basis in the gym.

After I read that mixed martial artist Forrest Griffin likes to get punched, I remember thinking to myself, “Well, there’s something that will never be true of me.” Ditto the fact that sometimes while watching mixed martial arts bouts, I notice fighters smiling and/or continuing to advance after taking a particularly hard hit. I don’t do MMA, but if I did, I can’t imagine a time when I’d smile about taking blows. When I thought about this a bit, I started to wonder how someone could set aside the inherent drive to self-preserve. How could someone actively embrace – and seek out – experiences that might well do them bodily harm?

But then I realized that examples abound of people (including me) setting aside survival instincts in the service of athletic advancement. The more I thought and talked about it with friends, coaches, and teammates, the more I realized there may be something to the idea that our athletic improvement frequently manifests itself as a carefully controlled attempt to overcome our natural reluctance to die.

Okay, maybe it’s not quite that dramatic. But there are many examples of how we have to push our limits, not just beyond what feels comfortable, but also beyond what might feel, or even be, safe, to make athletic gains. When I squat heavy (for me) I feel like Atlas with that bar on my back, only not nearly as prepared for the job. I fear there is potential for me to injure myself – and there is. There is a joke that one punch in an MMA fight makes a black belt in Brazilian jiu jitsu into a brown belt, two punches makes a purple belt, and so on. I have heard countless stories of novice Olympic lifters balking at dropping under a snatch because if the bar fell on their head, well, that could be bad. Many people I know do not like to turn upside down for a handstand or will do everything possible to avoid even going near the water. Activities like acrobatics or high-level gymnastics like trapeze work or aerials on a balance beam are frequently described as “death-defying.” Surely with good reason. 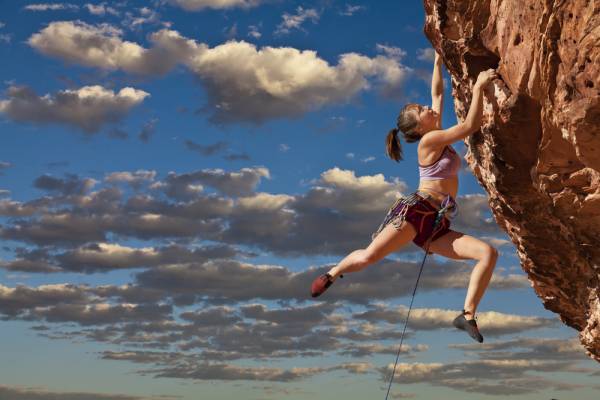 The athletes who are skilled at these feats make them look easy, like it isn’t a big deal to swing and flip in the air with no net or be flung around by a fellow ice skater who repeatedly whips your face to within inches of the ice. Obviously, it is anything but easy, and it takes loads and loads of hard work and belief in yourself, your coaches, and your teammates to get to that place. Further, in a very real way, it takes loads and loads of individual decisions to set self-preservation and survival instincts aside, in the service of incremental progress toward feeling comfortable tempting fate.

Although it may not be as dramatic as I described above, there is a very real danger of injury and bodily harm in many of the things we athletes do. Of course, as we work, we also develop skill, and it is arguably this skill that will keep us safe. But to get to where we are highly skilled, we have to push ourselves beyond our skill, if only a little bit, and it is in that no-man’s land where our penchant for safety doesn’t actually help us progress.

In your own athletic pursuits, do you sometimes find yourself pushing your limits to what seems like a reckless or maladaptive extent? Why do you do it? How do you keep yourself safe while still working toward breakthroughs? Post your thoughts to comments.