One of the conventional tests used to assess explosive power is the vertical jump. A superior vertical jump typically correlates well with leg strength, sprinting speed, and other leg-power activities. Review almost any high school, college, or professional sport testing protocols and you would be hard-pressed to find one that excludes the vertical jump test.

Because the vertical jump is a standard measuring stick, it is an often-researched topic. Recently two studies were conducted to determine how the vertical jump was affected by 1) strength and power training and 2) training on stable versus unstable surfaces.

The first study compared the effects of strength training (ST) and power training (PT) scripts on neuromuscular adaptation and alterations in vertical jump performance, as well as kinetic and kinematic factors (study of motion and the description of motion, respectively). The subjects were forty physically active men (average height: 5’-10”, weight: 165 pounds, and age: 23.5 years). Each subject had at least two years of strength training experience and was assigned to one of three groups: ST, PT, or a control (C) group. Maximum dynamic and isometric strength, cross-sectional area, and muscle activation were assessed pre- and post-test. Additionally, squat jump and countermovement jump performance, kinetic, and kinematic factors were also assessed.

Conclusions of the study: 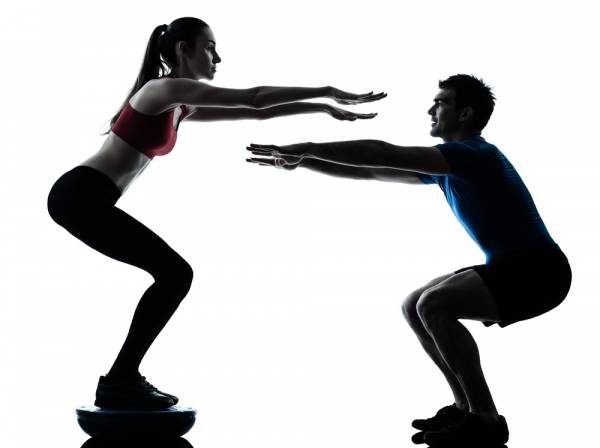 The second study compared power outputs in the concentric (raising) phase of squats performed in interval mode on stable and unstable surfaces, respectively. The subjects were sixteen physical education students who randomly performed six sets of eight repetitions of squats on a 1) stable support base and 2) BOSU (unstable) ball, respectively, on different days with a two-minute rest between sets. A 1-repetition maximum (1RM) was obtained for each subject. Repetitions with 70% of the 1RM were then performed under both conditions. Using a computer system, force and velocity were calculated to determine power output.

Conclusion of the study: Power output during resistance exercises is more significantly compromised when using unstable surfaces as compared to stable conditions. If instability resistance exercises are used in a training program, understand maximal force production will not be realized.

My recommendations based on the results of these studies: