My grandmother started walking five miles a day when she was 60. She’s 97 today and we don’t know where the hell she is. – Ellen Degeneres

I’m obsessed with Tim Ferriss and his obsession with improving lifestyle and body. Ferriss’s The 4-Hour Body is one of my favorite weight loss books and there’s one theory in particular that I love – the Minimum Effective Dose (MED).

The MED is simply the smallest dose that will produce a desired outcome and anything BEYOND the MED is wasteful. For example, water boils at 100°C at standard air pressure. Water is not “more boiled” if you add more heat. You would save money on your gas or electric bill if you didn’t continue to increase the temperature of the water – thereby conserving resources for something else more productive.

The same goes for weight loss. It’s more time and resource-efficient to know the MED for actions required to trigger removal of stored fat. This is a useful concept not only for weight-loss clientele, but also for athletes looking to get leaner without adding a lot of volume to their training program.

Now I’m not a doctor or a scientist, but I do read a lot and I’m happy to experiment on myself when it comes to something non-threatening. For a host of reasons including blood sugar readings, hormone responses, and improved insulin sensitivity, Ferriss claims that eighty seconds is the magic number when it comes to the MED of muscular contraction to help “push” calories into the muscles instead of being stored as fat. Just eighty seconds to make sure my hips don’t get bigger? No problem.

The timing of these muscular contractions was also a key component to making the most efficient weight loss effort. But when do I do these exercises? According to Ferriss, blood sugar was highest about an hour and a half after a meal. Ideally I would do a bout of deep squats and wall tricep extensions or “wall pushups” for eighty seconds immediately prior to eating and again at an hour and half after the meal – especially a cheat meal. (And by the way, any large-muscle-group exercise will suffice for eighty seconds, so if you prefer walking lunges, bicycle kick crunches, or pull-ups then go for it.)

That week, I lost 2.5 pounds even after a cheat day and immediately began sharing this little tip with my clients. Amy, a client who was on the “six-day slow carb meals with one cheat day per week” plan, even did her eighty-second bouts of exercise at Disneyland with her friends. And how did she do? Take a look: 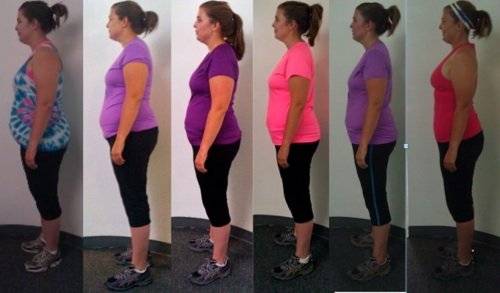 Amy lost 55 pounds and even more inches. Can you see that smile emerging on her face from picture to picture? From month to month, she didn’t feel deprived and she got stronger and leaner and more confident. I’m also happy to report that Amy, a self-proclaimed couch potato when we first met, just finished her first Disney Half Marathon!

Don’t spend countless hours doing ineffective cardio when just eighty-second spurts (timed right before and ninety minutes after meals) will do the trick for weight loss. And for you athletes, experiment to see if this helps you get leaner without adding too much volume. Of course, this isn’t the ONLY exercise you should do, but it’s a nifty piece of advice to follow if you’re trying to take off some extra body fat.

An ACE Certified Personal Trainer and Group Fitness Instructor, Zen has spent over twenty years helping thousands of people get fit around the country: from showcasing her coaching talents on Season One and Season Two ofWORKOUT - Bravo TV's docu-drama about the lives of personal trainers, to writing and hostingThe Skinny - amusing and easy health tips for the newbie exerciser on ExerciseTV (Time Warner's online and video-on-demand exercise site), to teaching hundreds of conditioning classes from Chicago to Los Angeles.

Zen’s blog, Love and Fat, discusses the relationship between love and body weight, personal struggles and triumphs in the quest for a healthier and happier life, and suggestions on how to keep the love…but lose the love handles. With an extensive business background, Zen also relates to the diet and fitness pitfalls of working in corporate America.

It’s no coincidence that Zen enjoys motivating her clients with playful routines and humor as she’s also performed stand-up comedy for over ten years and frequently studies techniques from the masters of motivation like Tony Robbins. Have you ever done a 14-foot fire walk? That takes powerful focus…and Zen’s done it twice.

With a healthy respect for Western medicine, Zen also encourages people to take control of their own health through holistic choices and explore lifestyle changes to include unprocessed and organic foods as well as natural remedies. She’s a huge fan of nutrition and devours the latest studies in diet choices that help people lose weight.

Zen teaches others to stay curious about their limits and to push through their comfort zones. In sticking with that philosophy, she’s raced one marathon, two triathlons, and she just published her first ebook, From Flab to Fit.