What Weightlifters Should Know About Body Fat

Each sport has its own requirements for body composition, and that is what makes different sporting disciplines unique.

It has become cliché for those of us who have been involved in weightlifting for decades to periodically have to defend our sport when critics categorize weightlifting as a sport for fat people. The general public can be excused from this misconception simply because even if some lighter body weight categories are publicized by the media, only the monsters in weight are remembered. It is only a short jump for the public to conclude that grossly excess weight must be an actual requirement of the sport and not just an undesired byproduct.

In the attempts to defend our sport’s excesses there have been some pretty wild explanations as to why our big men are so soft around the middle. One of my favorites is the “ballast” one—that a huge belly is needed for balance in lifting large weights (which may not be much heavier than the athlete). This would only beg the question of why a featherweight does not seem to need any ballast to lift triple bodyweight. Another is the old “mass moves mass” argument, and that really only makes sense if the tissue mass is muscle. In reality, fat only acts as a drag on the force exerted. Finally, there is the “bounce-out” idea that a super-heavy needs a large lower corporation so that the belly violently reacts with the thighs, allowing a more energetic upward drive. Anybody who has ever been significantly overweight knows that fat has no such elastic quality.

With all of that said, it is still observed that weightlifters do not have the razor-thin body fat percentages displayed by bodybuilders, CrossFitters, and others. So what is going on here? Let’s take a look at just the lifters.

Sizing Up the Lifters

Studies of elite Soviet weightlifters some years ago consistently showed that the average body fat percentage of the various body weight categories varied according to body weight. Those in the lower weight classes had the lowest body fat percentage, frequently below 10%. As the categories moved higher that percentage rose until the 90kg athletes were generally around 12-13% and the 110kg men were around 15%. Of course the super-heavies could go considerably higher since they had no upper limit to worry about. These measurements were all taken on elite athletes and as a result all lifters could use these figures when making personal goals in regard to managing their own bodyweight. Anything over these figures meant that you were giving away too much to the opposition.

As we can see when studying the world record totals across the categories, the human body becomes less efficient the heavier it becomes. This is the basis of the Sinclair Bodyweight Correction Formula and is well documented by many others so I won’t belabor it here. Bigger lifters can indeed lift more weight but not proportionately more weight. Like everything else in the universe the body seems to be subject to a concept economists call “diminishing marginal utility”—more popularly known as the “law of diminishing returns.” It applies to strength and it also seems to apply to body composition. When a person is very thin it is relatively easy to gain musculature with appropriate training. Diet is not as important during training because the now active body wants to grow and will utilize any available nutrients. Muscle gets added but little, if any, fat.

As more and more muscle is built, the body becomes ever more inefficient at converting food into muscle. Any new weight gain will include a certain amount of muscle and a certain amount of fat. In the earlier stages of weight gain only a small amount of new gains will be fat—the rest is the good stuff. However, the more weight that is gained, the more inefficient the nutrient conversion will become. More and more of the additional weight will be fat. An elite super-heavy lifter, already over 135kg may find that they can only gain another pound of muscle if they are willing to tolerate another 2 or 3 pounds of fat. Though disheartening, such a lifter may decide that gaining more weight is still a viable strategy. This is because that extra pound of muscle is still expected to add to his strength potential, allowing a bigger total. There is no upper bodyweight limit so this lifter’s problem then becomes how to eat enough food, not to restrict consumption.

This strategy will only work up to a certain point and one of two things will happen. One, the body may get to the point where it cannot add any more muscle and every weight gain will be totally fat. In this scenario there is no more advantage to the lifter. Two, even if it is still possible to gain a bit of muscle, the gains in adipose tissue will start to compromise the lifter’s joint mobility and reaction speed. This was evident in the late careers of Vasily Alexeev and Andrei Chemerkin. Both were nearing the 180kg mark and were very strong but had great difficulty getting under the weight. 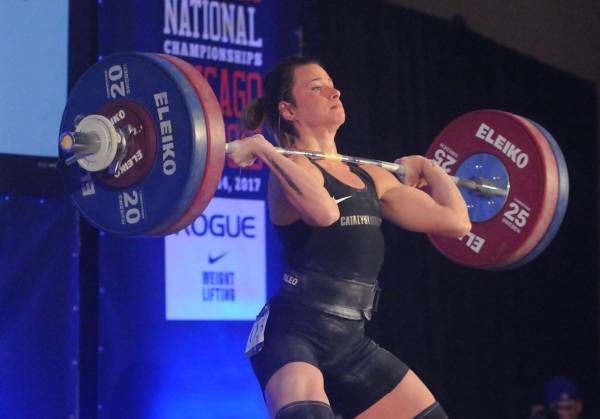 The above-mentioned Soviet studies only studied men since there were no elite female lifters at the time. A study made today would have to include women as well as men. A new study would undoubtedly show similar body fat percentages for men but higher figures all around for the various women’s categories. Women generally have less muscle than men, especially in the upper body, while also having more subcutaneous fat. While this tendency is less pronounced in trained female weightlifters it still holds true compared to male lifters. This extra adipose tissue is needed for proper female bodily functioning, so an attempt to eliminate it will have too many undesirable side effects. This makes pure muscular weight gain even more difficult for women and is the reason why the heavier women’s categories usually display more body fat than the lower weight categories.

The Role of Aging and Sustainability

Aging also works against ideal body composition. All of us old-timers know age is no friend when it comes to managing body weight. The body also gets less efficient at converting nutrients into muscle as we grow older. When an elite lifter has peaked at his or her preferred body weight and is past 30, they may find that they need to gain weight in order to make any more improvement. Not all of that gain will be in lean tissue, so any increase in the total will not be matched in Sinclair scores.

Finally, we come to the problem of sustainability. Many weightlifters would indeed like to get down to 5% bodyweight. Vanity aside, if for no other reason, an extra 5-7% would theoretically enable a 90kg lifter to add another 4 to 6kg of muscle and that would make a difference in strength potential. A lot of lifters, especially younger ones, could eliminate that fat at competition time. Since elite lifters only lift competively a few times per year, that might not seem to be to taxing. But as any lifter knows, losing the weight quickly invariably results in a loss of strength as most of this weight loss is in vital fluids.

The alternative would be to maintain a bodyweight that is only 5% fat. That would negate the need for cutting weight before competitions. This option is also not viable because maintaining such a low body fat is very difficult if they must also train heavy five days a week. The calorie restriction necessary would also eat into the energy needed to train. Even if it might be possible to train down to 5% body fat, what usually happens is that the lifter’s strength gains come will then to a grinding halt. They might lose the weight and they might even lift as well as they did at a heavier bodyweight, but they can forget about making any long-term improvement in strength.

So that is why weightlifters do not strive for the cut, shredded, and striated look of bodybuilders. Each sport has its own requirements for muscularity and body composition. That is what makes the study of different sporting disciplines so interesting. We should all strive to understand and appreciate the needs of each individual athlete and not compare them to one particular sport as an ideal physical standard. A lifter’s body is good for lifting and horrible for running a marathon—and vice-versa. One is not better than the other, they each just fit different needs.