A couple of months ago I wrote a shortie primer on fascia here, The Top 5 Ways Fascia Matters to Athletes, and I was delightfully pleased to hear from a number of teachers, trainers, and practitioners of all stripes who wanted to use it as a resource for educating their students, clients, or patients.

A couple of months ago I wrote a shortie primer on fascia here, The Top 5 Ways Fascia Matters to Athletes, and I was delightfully pleased to hear from a number of teachers, trainers, and practitioners of all stripes who wanted to use it as a resource for educating their students, clients, or patients.

So I decided to edit and expand upon that article to create a free resource so everyone could do just that. Whether you’re just a body nerd, someone trying to rehabilitate yourself out of injury and pain, or someone who wants to educate your people, the free eBook Why Fascia Matters is now available for download and sharing.

And on that note, here is an excerpt from the book of some of the things that weren’t fully discussed in the original article:

How We Actually Move

Just as there are no local problems, there are also no local movements.

We are taught to view individual muscles as the things the move our skeleton. And while they clearly participate in that, a large portion of that tensional force is transmitted via fascial sheets, which, because they are our connectors, affect not only the local joint, but also regions farther away.

It is less like a simplistic lever or pulley than it is like a complex network of sheets and bags (as what covers our organs) that transition into one another and orchestrate globally to create a body movement.

Or consider that muscles, which are presented as tangible and discreet things in anatomy textbooks, are not really a “whole.”

As in, the central nervous system does not activate a muscle as one whole thing. “The functional units of the motor system are the so called motor units of which we have several million in our body.

Much like a school of fish that have learned to swim together, depending on the quality of the sensory feedback, these millions of motor units can be individually regulated.” (Schleip 2003)

I love Robert Schleip’s way of seeing the motor units of a muscle as a school of fish!

It helps us to see things on a more nuanced scale. Your triceps, for example, are not really such a set-in-stone solid thing. They are more like this school of fish that has decided to “swim” in a way that creates triceps-ish movements in that location.

But if you’ve looked at enough human bodies it becomes clear that it really isn’t “a tricep, is a tricep, is a tricep.” Sure your triceps are not going to flex your knee (unless Dr. Frankenstein got ahold of you), but on a more refined level we understand that how we move – i.e. which motor units are firing- is as important as what we move.

To put it another way, our central nervous system views us as having one system-wide “muscle” which has different actions depending on what motor units are firing.

Sure we’ve managed to catalog those actions as resulting from around 640 discrete structures, but they just plain old aren’t as distinct as we tend to describe them. If you’ve dissected a human cadaver you know that it takes a scalpel to ferret out the separations between things.

You don’t just remove the skin and see everything laid out in a shiny red muscle topography of individual structures.

A Masterpiece of Tensegrity Architecture

Speaking of “no local problems” and “no local movements”, let’s talk tensegrity. The term “tensegrity” was created by Buckminster Fuller in the 1960s as a way to refer to “tensional integrity,” and in his case he was talking about it as it relates to an engineering principle in architecture. 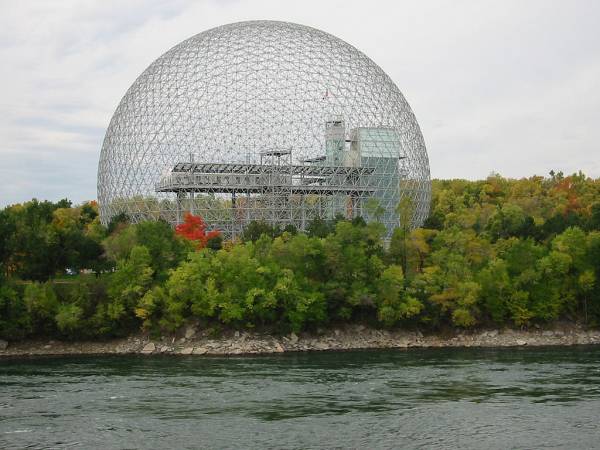 But this engineering principle applies to life as well! Donald Ingber applied a theory of tensegrity to molecular biology (as one example, the cell’s cytoskeleton is a tensegrity model), and Dr. Stephen Levin coined the term “biotensegrity” to apply this to biology and in particular to the musculoskeletal and fascial networks that we’re talking about here.

It’s gobsmacking, but it appears that from the molecular level on up, our body is a miracle of tensegrity architecture. We are composed of millions of geodesic structures (specifically icosahedral geodesics).

Well it (again) totally changes our framework from parts to whole. In tensegrity – in this case in regards to the human body – structures are stable and functional not because of the strength of individual pieces, but because of the way the entire structure balances and distributes mechanical stresses.

I had to put “far” in quotation marks because we have to realize how silly it is that we think of our head as “far” from our feet – or any other distance between two body parts – and therefore that it would be strange for those two parts to impact one another because of their distance. At most we are talking about a matter of feet here. We’re not exactly packing on the mileage to get from point A to point B. 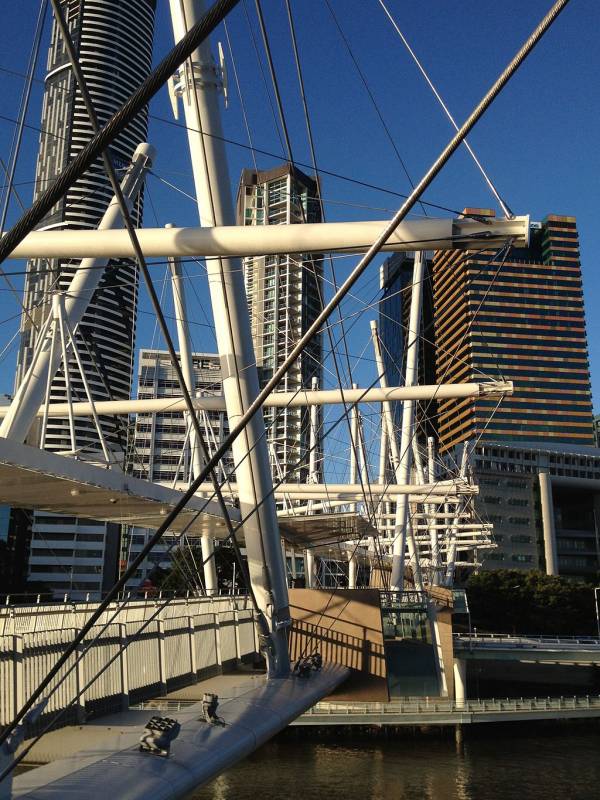 The fascia is the essential structure that suspends, honeycomb-like, our structure from the inside out and, if you recall from chapter two when we talked about how it’s all connected, fascia is the one system that tethers into every other aspect of our physiology.

Which means that balanced fascia makes for a healthier and happier structure/body, whereas unbalanced fascia sends us into the domino effect of a compensatory pattern, which we will discuss in more detail in the next chapter.

If you are a visual person, take a look at pictures of the Kurilpa Bridge. This bridge is a functional bridge because all of its support cables are doing their appropriate jobs.

If one of those support cables gets too short or too long, er, you probably don’t want to drive over that bridge.

Its structure has been majorly compromised. The same goes for our bodies, while we don’t “drive over them” we sure do “drive” them around plenty via our every day moment-to-moment movements, and moving through a compromised tensegrity structure creates its fair share of wear and tear.

As Dr. Rolf used to say, “Balance is strength.” Indeed.

1. Schleip, R., 2003. Fascial mechanoreceptors and their potential role in deep tissue manipulation. In: Fascial plasticity- a new neurobiological explanation. Journal of Bodywork and Movement Therapies 7 (1): 11-19 and 7 (2): 104-116.