Why You Shouldn’t Work Out When You’re Sick

One of the most frequent questions in is, “Should I workout when I am sick?’ Like many topics in fitness, there isn’t a clear-cut answer, but here’s what I suggest you should ask yourself.

A couple of weeks ago, I started coming down with a nasty bug. As Friday rolled around, I still felt not so hot and talked with my coworker about what to do regarding my upcoming weekend plans of snowboarding in the mountains. “You might as well go the mountains,” my coworker said. “You can be sick in the mountains or you can be sick at home in bed.” Feeling the point was valid, I packed up my snowboard and headed with friends up to the Rockies.

As I shivered by the fire at the mountain cabin a few hours later, my weekend trip suddenly didn’t feel like such a great idea. Looking at the faces of my friends who were witnessing my violent coughing and trips to the bathroom corroborated what I knew to be true – I shouldn’t have been there. I should have been at home resting.

Sometimes in life it pays to suck it up and rally, and sometimes you have to know when it’s time to rest and pay attention to your body. Being sick is one of those times. I guess I’ll chalk my weekend trip up to a lesson learned.

To Work Out or Not to Work Out

At this time of year, one of the most frequently asked questions in and around fitness is, “Should I workout when I am sick?’ Having just learned this lesson the hard way, my short answer is no, you shouldn’t. However, there’s certainly more to the question and this query requires a more in-depth analysis versus a simple short answer.

Like many topics in fitness, there isn’t a clear-cut, scientific answer to working out while being sick. Conventional wisdom suggests that if you’re only sort of sick (for example, a cold), it does no harm to work out and if it feels good, then why not. Conversely, the opposite is considered to be true – if you’re really sick (for instance, the flu), you should probably not work out as you could be doing more harm than good.

Time to Do a Neck Check

According to Thomas Weidner, head of athletic training at Ball State University, you should perform what’s called a neck check. That is, when determining whether or not to exercise, if your symptoms are above the neck – sneezing, sore throat, and runny nose – then it’s probably okay to work out.

Weidner drew his conclusion from two different controversial studies in which his subjects were actually infected with the common cold. Evaluating his subjects in a controlled environment, he determined their symptoms were no worse (or better) for exercising while being ill. In fact, the group that exercised, versus the group that didn’t, reported feeling slightly better after exercising.

Of course there are benefits to working out in general as it relates to our health. Specifically, exercise is a scientifically proven immunity booster. Exercising regularly may help you avoid getting sick in the first place. In a study at the University of South Carolina, adults who exercised regularly and moderately caught twenty percent fewer upper respiratory tract infections.

That said, while exercising moderately can boost immunity, the opposite is also true. Intense and vigorous exercise can increase your susceptibility to being sick. While all of this is well and good, it’s not necessarily news. It’s common sense that we should exercise for boosting our immunity when we’re not sick and that we should rest to boost our immunity when we are sick.

Why Am I Sick to Begin With?

In my estimation, the question of exercising when we are sick isn’t the right question to ask in the first place. A more valid question might be, “I’m sick. Why is body not in balance and what can I learn from being sick?”

Being sick happens to us sometimes. When we’re sick, it means our body is out of whack. While we simplify being sick to the bad luck of “catching” a cold, there is much more to the story. The problem lies in our reactive societal approach to health and wellness in general – treating symptoms versus causes. 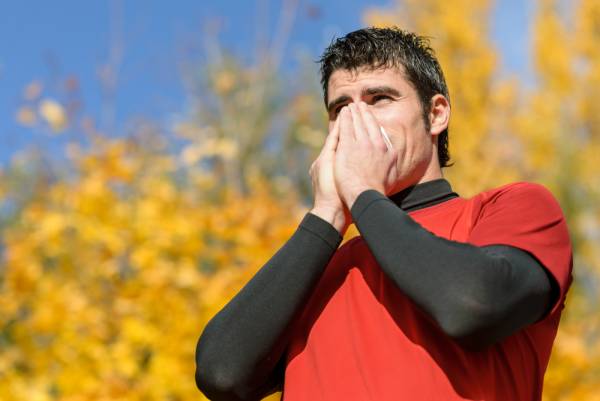 Many experts concur that the ultimate cause of sickness is stress. Stress produces the hormone cortisol, and cortisol turns off the production of cytokines, the molecules that encourage an aggressive immune response. While there are many ways to alleviate and manage stress (exercise being a key one), there are few ways to actually solve it.

However, if stress is the root of what ails us, then why not take being sick as an opportunity to tackle stress head on versus avoiding or masking it? Exercising while being sick potentially does just that- masks the fact that you really don’t feel well.

Furthermore, exercising when sick certainly doesn’t aid your recovery process. So why do it? While exercising when we’re ill may help us feel better for the moment, it hardly helps us slow down to see the bigger picture of our health. Though perhaps not a popular opinion, I almost think we’re supposed to get sick on occasion. Our ultimate job in sickness is to learn and grow from the setback, as we should any challenge in life.

If you’re sick here’s a few tips for making your way through it and being truly better on the back end:

When it comes to the final word on being sick and whether you should exercise, it comes down to three words – rest, reflect, and recover. Do that.