We all know many winning combinations – Laurel and Hardy, Rodgers and Hammerstein, Lennon and McCartney, and of course, peanut butter and jelly come to mind. Fighters may fight alone, but fighters win with successful combinations. It is interesting to note that fighters are often known for singular power punches rather than the combinations they throw them in. However, power punches are rarely thrown without a set up, meaning they are often thrown either in combination or off a fake or feint.

Oscar De La Hoya and Smokin’ Joe Frazier were known for their vicious left hooks, but those left hooks had to be set up. To that point, there’s an old adage in boxing that legendary trainer Freddy Roach likes to say, “Only suckers get hit with right hands.” Most of us, ninety-plus percent, are right-handed and our power is often in that dominant hand. In a fighting stance, however, that right hand is further away from our opponent and therefore he or she often sees it coming and is able to make adjustments. Again, one typically has to set up a power punch or a right hand.

Freddy Roach’s top fighter, Manny Pacquiao is actually part of that sub-ten percent group and fights southpaw. He’s also considered one of the top pound for pound fighters in the world. Manny works with blinding speed and is often setting up that dominant left hand. He has done this for most of his career using a basic double-jab, cross combination. This one-one-two combination is the essence and foundation of many successful fighters. Any fighter can throw a jab and a cross, but lots of fighters throw punches in twos, and therefore most are prepared to defend against such a pattern. It’s in the multiples, fakes, and feints where things get confusing and tricky to defend. Like with chess, keeping your opponent guessing about when you will move and what your intention is betters your chances.

More so, it’s not just the combination in terms of sequence and number of punches thrown that makes the difference. In fact, the most important variable in one’s striking and in fighting in general is timing. The cadence at which you throw your punch is vital. Practicing your hand speed is important, but so is timing your opponent. Boxing and muay Thai are about rhythm, and the challenge is to practice breaking that rhythm by throwing punches and kicks on the off-beat. This is where fakes and feints can be so valuable in breaking things up. A double jab can be very effective for setting up punches, but not if it’s always thrown in the same cadence. Better to throw the jab-fake-jab, THEN a right hand. Or a particular favorite of mine: double jab, fake the right, and THEN throw a left hook, or slap hook. I might even add in a right hand for good measure.

Yet another variable in combination work is where the punches are aimed. Fighters practice their punches almost always going to the same location, usually the head. I like to throw the double jab with the first jab going to my opponent’s gloves knocking them away from his face, with the second jab as a more powerful punch right down the middle. A double jab can be very effective if the first jab is a decoy and the second one is meant for power. That moment of surprise in your opponent is your opportunity for that follow-up power punch. 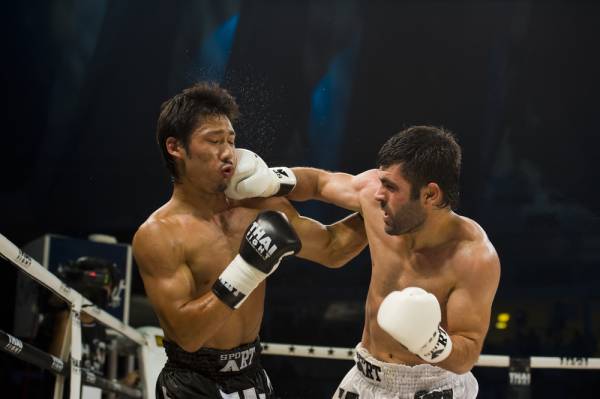 They say it only takes one punch to win a fight. With that in mind, many sit back and wait for the opportunity to throw that one punch, or even more commonly fighters are impatient and rush in to throw that big haymaker. That’s a good recipe to wind up on your back. We all like to think we have that puncher’s chance in a fight and in life, but I’d rather make my own luck than rely on a lucky punch, thank you.

A much more effective strategy for winning is to have a plan and an intention for assuring victory. Swinging for the fences and hoping that Superman punch lands isn’t a good bet. Big punches look great in the movies, but in real fights you’re going to have to switch up your timing and be willing to try different combinations. The one punch wonder is a lot like its cousin, the one hit wonder – a mere footnote in history. Real history is made with the winning combination of preparation, discipline, and strategy.